While waiting for our Thanksgiving dinner guests to arrive, I wondered if I had anything in my archive of artwork appropriate to the occasion... and then I remembered this oddity. It's another one of those "tryout"-type pages which I drew with the intention of using to try to get a job drawing comics for Marvel or DC, but never actually did anything with. 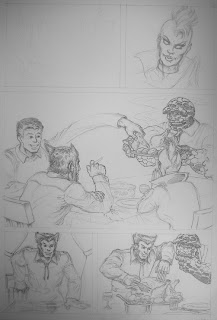 This one is unfinished. I don't recall exactly WHY I drew this scene of several of the X-Men having Thanksgiving dinner with the Fantastic Four, but I suspect that I was thinking that it would be a good idea to include some non-superheroic scenes in my tryout pages. I think my favorite part of this piece is Wolverine slicing the turkey with his claws.

Again, please excuse the poor quality of the image -- I lit the piece badly when I photographed it. -- PL

Blast from the Past #120: Dragon with mushrooms 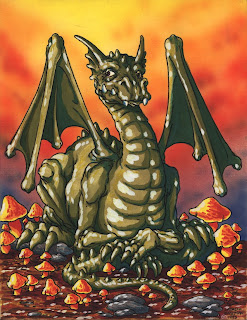 This piece from 1983 is another one of the collaborations Kevin and I did pre-TMNT, where he would take a black and white drawing I had done and color it with Dr. Martin's dyes. -- PL
Posted by PL at 9:15 AM 6 comments:

Today I intended to go for a motorcycle ride to this interesting site, but it was pretty darn cold -- water is freezing on the roads, so I think I'm going to hang up my helmet for the season. Instead of riding, I drove my truck to "Madame Sherrie's Castle", just across the river from Brattleboro, Vermont.

I first learned of this place about eight years ago while shopping with my wife in New Hampshire. I found a postcard with a photo of a beautiful stone arch set out in the woods. The back of the postcard only gave a little bit of information about it, but I was able to find the place.

Essentially, it is what is left (after a devastating fire and many years of exposure to the elements) of an unusual house owned by a woman named Antoinette Sherri, who apparently led a very colorful life. There isn't a lot left, but the curved and arched staircase is sill quite impressive. The house must have been very lovely before the fire. 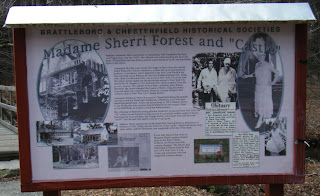 This is the sign with a brief history of Madame Sherri posted near the entrance to the path leading up to the ruin. 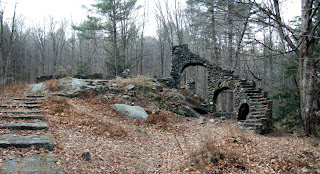 And this is a photo (actually a combination of two photos) of the ruin that I took today. -- PL
Posted by PL at 8:15 PM 4 comments:

Given all the hype around that new movie based on the "Twilight" books, I thought it would be fun to post an old drawing of mine that featured a vampire. 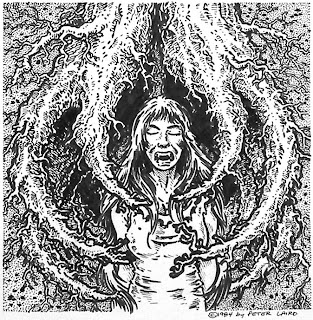 I'm pretty sure that I did this as an illustration for a story in a fanzine in 1984, but I can't recall at the moment which fanzine, or what the story was about (other than that it involved vampires in some way). -- PL
Posted by PL at 8:25 AM 3 comments:

Although most of the leaves are off the trees, and the great and glorious fall colors have for the most part been muted, there are still patches of beauty to be found. 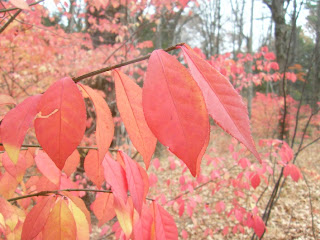 I took these photos last week during a bicycle ride along a riverside path in Northampton, and stitched them together into this panoramic view.

I'm not sure what these bushes are, but the leaves they bear turn this exquisite shade of red every year, and when you ride or walk through this part of the path, the air glows with a roseate light. Quite lovely. -- PL
Posted by PL at 8:07 AM 5 comments:


I ran across this photo recently. I took it a few years ago during one of my many walks around Northampton. This lovely sculpture of a heron is located in a small pond next to the Smith College greenhouses (a fascinating place to visit if you're in the area).

I liked how the turtles were enjoying the sun on the statue's base... not something they would likely do if that was a real heron! -- PL
Posted by PL at 8:11 AM 8 comments:

When I was in high school (1968-1972), we would occasionally have "assemblies", where everyone in the school would crowd into the auditorium and hear the principal give some kind of talk, or there would be a pep rally for one of the sports teams (snore), or a guest speaker would address us.

One year -- I can't remember which one it was -- one such assembly was called. Our principal, whose name was Nicholas DelNegro, introduced the speaker, a black man whose name I cannot at this point remember. I think he may have been a politician or a college administrator -- it's been a long time, and it really doesn't matter for the purposes of this story.

The principal finished the introduction, and the guy started speaking. He began by thanking Mr. DelNegro... and as he said that name, an audible titter swept through the auditorium. I just wanted to crawl into a hole... it was so embarrassing. I couldn't believe that so many of these idiots I had to go to high school with were so stupid -- I mean, laughing because this speaker was black and he said "negro" (as part of Mr. DelNegro's name). It was the worst kind of "Beavis and Butthead"-type moment, long before Beavis and Butthead were created.

The speaker paused. You could tell that he was pissed and appalled (and justifiably so). "Did I say something funny?" he asked. An awkward silence went on for maybe ten or twenty seconds. To his credit, the speaker continued and said his piece. I don't remember what he said. All I really remember from that incident was feeling ashamed to be part of this group of morons, even though I was not one of the ones who laughed.

Why do I tell this story? It's just a way of trying to articulate how I feel now that Barack Obama has won the election and will be our new President next year. Like many people of my age, I grew up in a time when the idea of a black President was an interesting fantasy -- something that, given the evolution of race relations and the civil rights struggle in the US, might some day be possible. But I really never expected to see it this soon. In fact, I despaired of seeing it within my lifetime.

There are a lot of important reasons to be happy that Barack Obama has won the election. He's smart, tough and principled. He understands and respects the Constitution (a quality that those in the White House for the last eight years clearly don't share). But simply the fact that he has been elected -- a black man with an exotic-sounding Middle Eastern-type name, in a time when we are all supposed to be afraid of people with names like that, when those in power expect that when they say the word "Terrorist!" we will all froth at the mouth like Pavlov's dogs and march in lockstep to whatever fear-mongering tune they play -- is something that offers me hope that this country actually CAN get its act together and quite possibly have a decent future. Our evolution toward a better society -- which seemed to screech to a halt and start to backslide during the dark days of the current Bush administration -- may actually start moving forward again.

I'm not a "Pollyanna". I don't expect that Barack Obama will be a perfect President, or that everything he and his administration does will be right. But as I right now watch John McCain give his concession speech (to his credit, a very gracious one), I am filled with hope for our country, more so than I have been in any of the last eight years. -- PL
Posted by PL at 8:41 PM 21 comments: