Often, when I get to pottery class, either hand-building or intermediate wheel, I don't really have a plan for what I will be doing. I get there and I let the clay speak to me. Or perhaps a better way to put that is that the clay and my hands have a conversation, and eventually something emerges.

But this Tuesday morning, in my hand-building class,  I arrived with an idea. It wasn't a fully-formed idea, but I knew that I had two prepared slabs of leather-hard clay to play with, having made them at the end of the previous Tuesday's class. The idea was pretty basic -- make a boxy teapot.

I decided to use a shape I'd stumbled onto during my last hand-building class in the Spring. I'd made a template which was essentially a rectangle with one of the ends narrower that the end parallel to it, so that the shape (and I am sure there is a name for it, but I can't at the moment think of it) tapered toward that end. I used this template to make four pieces of clay which I then joined into a four-sided form. But instead of joining them narrow end to narrow end, which would have resulted in a sort of truncated pyramid shape, I decided to alternate the order, flipping each successive slab so that the narrow end joined with a wider end. I'm probably not articulating this too clearly. But the result was a very intriguing geometric shape which pleased me greatly, and I went on to make several hand-built pots using this technique. Here's an example from that last class: 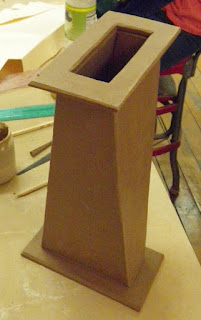 Anyway, I thought it might be fun to do something similar to build the body of this slab-sided teapot, although the shape I had in mind was less vertically-oriented and more squat -- as teapots generally are.

It came together pretty quickly. Once I'd textured the slabs (using two small carved wooden rollers TIffany has in her studio, part of her extensive selection of texture tools), I traced the shapes with the template I'd made onto the slabs and carefully cut them out.

Once I had the basic body shape, complete with base, I had to make a top with a lid, and decided to go with a long rectangular lid, again made from pieces of a textured slab. 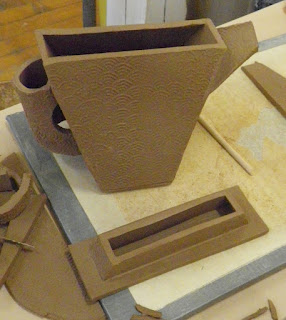 Then it was on to the spout, which came out a little funky -- I think I was rushing a bit, and didn't consider its shape carefully enough… so it isn't exactly centered or straight. But at least it i positioned at the right height, thanks to TIffany stepping in and reminding me to keep that in mind (I'd made a teapot previously with a spout poorly positioned, making it impossible to fill the pot more than two-thirds full without tea beginning to spill from the spout).

For the handle, I'd considered building an angular shape out of the slab, but ultimately decided to try something a little different, carefully (so it wouldn't crack) curling a piece of the softer slab into an half-cylinder shape, then cutting fingerholds into that once I'd attached it. 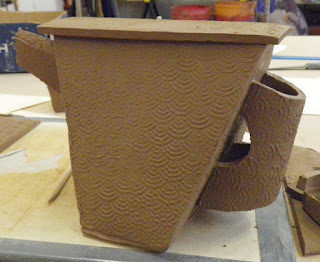 Will it all work as a teapot? Will the handle be comfortable to hold? Will the spout dribble or flow? The jury's still out. But it was a lot of fun to build. -- PL
Posted by PL at 7:13 AM

I'm fascinated, as always, by your creative process. Such an unusual piece, with its own elegance.

Oh, and hey! 'll gladly participate in your experiment....Harney's Paris tea, if you please.

Hi Mr. Laird - you don't know me, but I just wanted to take 2 minutes of your time to thank you - this is the only way I could get a hold of you.

I'm 30 years old and live in Canada. Like every other child of the 80's, I was a huge fan of the Ninja Turtles.

In 2012 I finished medical school and began my neurology residency. In 2014 my brother came over to watch "Turtle Power: the Definitive History of the Ninja Turtles", and loved it. My brother and I had been toying around for a long time with the idea of writing a neurology textbook for medical students, but in a totally different way then standard medical school books. Rather than a dry texts with few figures, we almost wanted to do it like a cartoon, with huge, exaggerated drawings. We pitched it to a bunch of publishers, but they just laughed at us. Graduating from medical school, I am over $300k in debt, and I was trying to think of anything to I could do to try to help me out of that (as medical residents get paid less than waiters, both here and in the USA), and my brother was between jobs, and just trying to get by.

We watched that documentary and were so inspired by your and Mr. Laird's story of the early days of ninja turtles, and the struggles you had. Boy did it resonate with us. We decided to retool, and go knock on a few doors. Finally, a few publishers said they'd submit our samples to a few test audiences. What returned were some of the most positive reviews the publisher's said they had seen in a long time. Soon, publishers were outbidding each other to win our contract. What a turn around!

We're just working on it now with the plan to launch in Sept of 2016. I just wanted to say thanks - both for the Turtles and my childhood, but also for inspiring us (like you probably have so many people), with your story of tenacity. You made us believe that two little guys can take on the giants and win.

We actually met about 10 years ago at comic con in Toronto. I remember, you drew me Shredder, Donnie, and Raphael. It's one of my greatest regrets that my parents threw out a box of my stuff when I moved out, and I lost them. Turtles have had such a huge impact on me and now on my book....I was hoping you would consider redrawing them for me? I'd pay you anything you thought reasonable.

If you'd be willing, I'd be thrilled to hear from you. Please contact me at warren.berger85@gmail.com. Thanks again. I really hope this reaches you!

Cool shape Pete...scale of it looks "large"...what are it's overall dimensions? The texture looks like ripples made up of nested arcs, which is an interesting contrast to the angular, planer form. Has a commanding/demanding presence. The last photo with the tea pot fully assembled, is it fired at this point?
JED
(Ps: 3rd time trying to post this, previous tries failed, I think, for reasons I don't understand, so my apologies if all of a sudden you get 3 similar posts showing up...)

Does he ever reply??