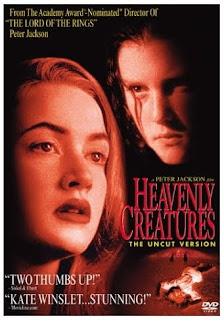 Last night, I thought I was going crazy… or, at the very least, that my memory had really degraded beyond an acceptable measure. Let me explain…

A few months ago, I had enthusiastically recommended to my wife "Heavenly Creatures", an early Peter "Lord of the Rings" Jackson movie which also marked Kate Winslet's film debut. I'd bought the DVD some years ago and watched it a couple of times, and thought it was a really interesting, well-crafted character study of two teenage girls who murder one of their mothers. It's based on a real event that happened in New Zealand. And there are some very nifty special effects in it which are used to illustrate the elaborate fantasy story the girls create.

So several weeks ago, Jeannine expressed interest in watching it, and I went to my drawers of DVD's to pull it out. Not there. I thought it might be in one of the several piles Emily had made in the living room. Not there, either. I scoured all the places where I might have set it down, and even queried some friends to whom I may have lent it. It was nowhere to be found.

So I ordered another copy through amazon.com, and two nights ago, we started watching it. I immediately thought I noticed something odd -- there was stuff in the movie I didn't remember. And… it wasn't quite as good as I remembered, either.

We left off watching it at about the halfway point, and then last night picked it up again and watched the rest of it. And that odd feeling continued to grow. The movie seemed too long, scenes went on and on, and there was more stuff I didn't remember. I was starting to get embarrassed that I had highly recommended this film to my wife, who was clearly not too impressed.

Then, for some reason I can't remember, I picked up the DVD case and saw two words which explained everything:

So that was the reason I was seeing things in this movie I had absolutely no memory of seeing on previous viewings! I breathed a big sigh of relief…. and disappointment, because as far as I was concerned, none of the material which had been restored to this "uncut" version had made it any better. In fact, it had made it worse -- it dragged, it went over and over the same points, it felt too long.

As the old saying goes, "Sometimes less is more." It certainly was in this case. -- PL
Posted by PL at 5:44 AM

No option of uncut or theatrical?
what a half-assed dvd.
its also peter jackson's fault for compulsively wanting alll his movies to be around 3 hours long.

A number of the movies that are very long could be much better if condensed. Only so many can work despite directors and producers ideas that longer is better.

I guess the movie in question also shows us that not everything we chose is as good as we anticipate.

Haha I remember clearly my last summer with my mentor Shirley... She was an amazing lady.

She told us, regarding editing, that we'd have to accept that "some of your best stuff will end up on the cutting room floor".

And once she made us work through an exercise in which we were to go through the pages we were sharing with the group the next day and cut three words from each and every sentence.

Y-eah. It wasn't easy, but I did it, and you know what? She actually knew what she was doing! ha The exercise not only tightened my piece, it forced me to examine each and every word. Frustrating, but also revealing. I had no idea how many "extra" words I'd used!

I hope you'll be able to find a "cut" copy of your movie.

Rejoicing in the day,
-Mary

I'm an incredibly huge fan of King Kong (the original) and even enjoy the 70's remake in its simplicity, but I was CRAZY excited for Jackson's King Kong. When I walked out of that cinema after seeing it, I thought exactly the same thing "Less is more". The original film manages to capture and hold the viewer far better than the remake in nearly a third the running time!

Jackson's films always look nice, but they need to realise when enough is enough.

Dear Mr. Laird,
Hi. I hope you don't mind me writing to you here, I couldn't find any other way of contacting you. I will be as brief as possible.

Her all time favorite characters are the Teenage Mutant Ninja Turtles. I put together a project where I have been folding one thousand cranes (as per the Japanese legend that states if you fold one thousand cranes, you get a wish). I am flying up to present them to her on the twenty third.

I thought it would be amazing if I could send one to you and have you sign it and send it back.

I really hope this isn't an imposition. Zellie is very ill and I am just trying to do whatever I can think of to keep her spirits up.

Please let me know if you'd be willing to participate. You can email me: luvmymousy at yahoo dot com. (I am trying to avoid spam by writing it that way)

I'll be waiting anxiously to hear back from you. Time is of the essence. Thanks so much...Tammy Walsh