Thoughts on the new "Alice in Wonderland" movie 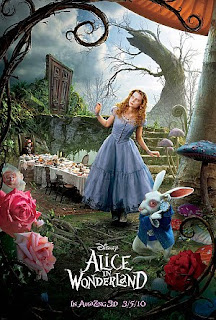 A few days ago, I had the pleasure of going to the movies with my wife Jeannine and Dan Berger and his wife Jess. The movie we saw was the new "Alice in Wonderland" by Tim Burton.

The pleasure was mostly in the company, not in the movie itself -- I found it quite underwhelming, and sadly one more example of a movie in which visual spectacle wildly outstrips the story being told.

I've greatly enjoyed several of Tim Burton's movies, especially "Nightmare Before Christmas", which I've probably seen ten times (most of those viewings with my daughter). He has quite a wild visual imagination, and that quality is very much on display in this new "Alice". I applaud everyone who had a hand in crafting the look of this movie -- it's really quite something, a truly sumptuous feast for the eyes. I found it far more compelling than, say, the visuals in "Avatar". In "Alice", the world being created is surreal and ridiculous, and thus (in my opinion) much harder to render convincingly "real" than the more prosaic jungles and spaceships of "Avatar". I might even go back to watch "Alice" again just to look at the images.

But I wouldn't be returning for the story, which is woefully thin. Not that the source material is a masterpiece of plot, mind you, but even that "collection-of-incidents-which-passes-for-a-story" would be preferable to the thin gruel of this new tale. In fact, when, for a brief moment in this movie, we see a short flashback to the original Alice and her first journey to Wonderland, I found myself thinking how much more fun it would have been if Burton et al would have just turned their considerable talents to a straight adaptation of the original. They just might have produced the ultimate cinetmatic iteration of "Alice in Wonderland".

And I must also say that I groaned loudly when, near the end of the movie, Johnny Depp's "Mad Hatter" busted out some boogie moves to a funky beat. Ugh. -- PL
Posted by PL at 8:29 AM

saw the film and i liked it. not the best burton film. i think i need to see it again in order to have a final opinion.

I agree Dad that the story was not very strong. I think a major problem was the girl who played Alice...she was very stiff. The supporting characters (Johnny Depp, Anne Hathaway, Michael Sheen, etc.) really made the movie too. Yes, the end where the Mad Hatter does that goofy dance was a definite WTF moment.

There were times when I felt that 'something is missing' and I think it has a lot to do with not enough character development, not enough interaction to satisfy, not enough...heh, Mad Hatter/Alice scenes! I admit it, if not a kiss goodbye, Alice should have at least hugged him! Have a Wizard of Oz moment like Dorothy and the Scarecrow: "I think I'll miss you most of all." Even when he arrived at the White Queen's castle, I would have hugged him then as he walked up!

Scenes felt rushed or far too shortened to enjoy. When I mean not enough character development, it seemed as if, for example, Alice was rushed into her transformation from the real world to Wonderland. It seemed like she went from a wouldn't-harm-a-fly Victorian girl to a sword-wielding warrior in rapid speed that was not believable. If they had shown her practicing a little with the sword, it would have helped. But, she jumped right into battle as if doing it all her life.

All in all, I still enjoyed the film immensely from start to finish. Though, I honestly could have done without the Futterwacken dance at the end. Seriously, it did not belong there, threw off the scene's moment big time.

I personally thought the Mad Hatter was a waste.

I love Johnny Depp but the whole purpose of the character, it felt very "quickly, add Johnny Depp in there really quick!" which was just depressing.

Anytime anything got a tiny bit interesting, the film ran over it's own foot.

Like when Hatter accused the Cheshire Cat of what he did 'that fateful day when the Red Queen took over' and you get a sense of history and possible betrayal. It really made in my mind, instantly that The Cheshire Cat might be a possible villain or secret agent for the Queen, only until we do a flashback from the Hatter. All important of that little bit of dialogue was a waste. A red herring that actually made the film seem interesting for a second.

The subplot of the Red Queen seemingly concerned with her methods which in fact,conflicting with the Knave of Hearts was something I would of loved to see more.

Hook was the same type of film, a follow up or sequel to an original classic story, and it had PLENTY of faults, but it was way more entertaining.

I rather pay the same amount of money to see HOOK again.

"msemilylaird said...
I agree Dad that the story was not very strong. I think a major problem was the girl who played Alice...she was very stiff. The supporting characters (Johnny Depp, Anne Hathaway, Michael Sheen, etc.) really made the movie too. Yes, the end where the Mad Hatter does that goofy dance was a definite WTF moment."

Em, thanks for reminding me of something else I thought of but forgot to include with my review. I agree -- the actress playing "grown-up Alice" was ill-cast. -- PL

"Jason said...
I personally thought the Mad Hatter was a waste."

I thought he wasn't very "mad" -- just kind of goofy/sweet. It's been a while since I've read the original story, but I recall thinking that the Mad Hatter was actually kind of creepy, and nowhere in Johnny Depp's portrayal did anything like that come though. -- PL