No, I don't think this was intended for use with a game of any sort (though as a title it DOES have a kind of ring to it). I believe it was something I doodled during my involvement with the Nuclear Freeze folks back in the late 1970's/early 1980's. 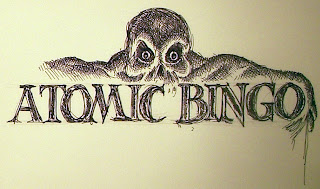 Although I have engaged in some lengthy head-scratching trying to remember exactly WHY I drew this, my gut feeling is that it was probably some idea of mine intended to illustrate the terrible randomness of our possible annihilation by nuclear weapons. And I think "Bingo" is a game predicated upon randomness.

I love it reminds me of manthing with a helping of swampthing. Then the name reminds me of something out of a robocop commercial ~ got to love those.