This is one of those drawings that I like a lot, because I feel it was almost completely successful in its execution... but like many of my drawings from the period of the late 1970's and early 1980's, I don't remember exactly what it was done for.

It is likely a drawing done to illustrate a story or column in "Hampshire Life", but it also just weird enough (worms in ice...?) to have been one of the drawings I produced for various horror/science fiction fanzines back then. Maybe someday I will stumble across the printed version and know for sure.

This was one more example of using the shading film which had opaque WHITE dots instead of BLACK dots. I found it a nice way to produce a muted effect when laid over black line work -- here it works to sell the idea that the worms are inside the ice cubes. -- PL
Posted by PL at 6:54 AM 3 comments:

Labels: Blast from the Past, fanzine, Hampshire Life 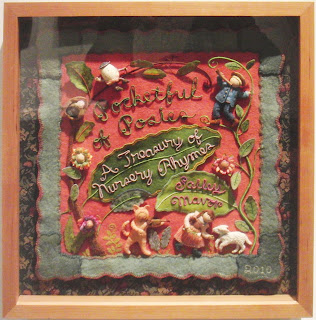 … at the Danforth Museum in Framingham, MA and we were all just blown away by the quality of her work... but I couldn't.
Well, I guess I COULD have, but it might have ruined the surprise Christmas gift I managed to procure for Jeannine through an email contact with with the artist -- several of Salley's original three-dimensional illustrations. Here's a photo of one of them, from a series of works illustrating the nursery rhyme "Hey Diddle Diddle", I believe. (Photo by Salley Mavor.) 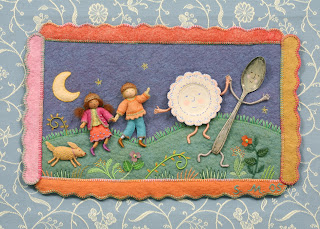 The cliche phrase "photos don't do these justice" was never more apropos than for the work of Salley Mavor. These things are simply amazing to look at, and benefit from standing in front of with your face a few inches away so that you can see more clearly all of the detailed stitching and nuanced color and careful design choices. Although it is completely reasonable -- for the sake of preservation -- that these pieces are behind glass (in beautiful wood frames made by Salley's husband Ron), it is also a shame, because if you are anything like me, you just want to TOUCH them, and tactilely experience Salley's amazing melange of textures. Her use of found objects is extremely clever -- in one piece, a baby is swinging in a cradle hung from a tree branch… and the cradle is a quarter of a walnut shell. Absolutely perfect!
I don't think the show at the Danforth is still up, but Salley has a new show -- a slightly smaller number of pieces, but also several new ones which were not in the Danforth show -- at the Brattleboro Museum and Art Center in Brattleboro, VT. The show is titled "Sewn Stories", and Jeannine and I were very happy to get an email invitation to the opening, which was last night. And it was even more fun because we got to meet and talk briefly with Salley (and Ron).
Here's a photo from the opening last night of Salley posing with one of her more recent pieces, a large and gorgeous one titled "Rabbitat". 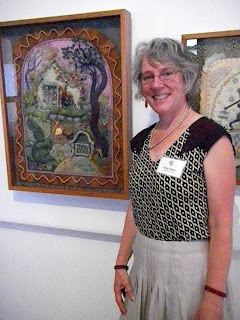 I highly recommend checking out this show, as well as the books which Salley has illustrated. A good place to start is Salley's website:
http://www.weefolkstudio.com/
And you can go here:

I enjoyed the first two "X-Men" movies -- I thought Bryan Singer did a great job of bringing the characters to life on screen. The casting was excellent, the effects were well-done, and the stories held together.
Things started to fall apart with the third "X-Men" movie, which had a few good scenes but really started to devolve into an embarrassing mess about halfway through… and the big battle between the mutants had some really bad fight staging. And the less said about Hugh Jackman's solo "Wolverine" outing, the better.
So when I heard there was going to be another "X-Men" movie, I did not hold out great hope that it would turn out well, especially when I heard it was going to feature all young mutants, in a prequel of sorts to the other three films. There would be no Patrick Stewart or Ian McKellen, sadly.
However, as time went on and I started seeing trailers for the upcoming film (titled "X-Men: First Class"), I began to feel somewhat hopeful. It actually looked interesting.
And on a recent short visit by our daughter Emily to this side of the country, I got to see it with her and Jeannine. Em had already seen it, but was willing to go again (she wasn't so willing to see "Green Lantern" again, but that's another story).
We all liked it, quite a bit. I especially liked seeing Hank McCoy realized much like he was in the original "X-Men" comics, although I do feel the actor they chose to portray him should have been a bit shorter and stockier, But it was still cool to see the bespectacled, slightly nerdy "Beast" in his pre-blue furred state. I would have liked to have seen the complete original team from those first comics -- Cyclops, Marvel Girl, Beast, Angel, and Iceman -- but I guess that wasn't possible if this film was to fit into the established continuity of the first two.
And as far as I could tell (from that single viewing), it did fit -- I did not detect any glaring errors. Maybe when I see it a second or third time, something will jump out at me, but it appeared pretty seamless.
I did feel that January Jones was not terribly impressive in her part of Emma Frost -- she seemed for the most part required to stand around and look sexy, which I guess she did, but her energy level seemed far below that of the other actors. Not so much as to ruin the film, but it was a little distracting.
There was one great cameo appearance which lasted all of about ten seconds -- I won't spoil it by revealing who it was, but it made me laugh.
I would definitely recommend this movie, especially for fans of the "X-Men" movie franchise who thought it was all over after "Wolverine". -- PL
Posted by PL at 7:10 AM 11 comments:

Sunset (sort of) from Mount Sugarloaf

A couple of days ago, I was out on the DN-01 and admiring the cloud colors as the sun was setting. I was thinking that if the road to the top of Mount Sugarloaf in South Deerfield was open, I might be able to catch some truly spectacular scenes from that high vantage point.
The road was, in fact, open, but I didn't time my arrival all that well -- the most colorful clouds had already faded by the time I reached the top of the mountain. However, I did get a few shots looking out towards the west and southwest, and used PanoramaMaker5 to put them together in this image.

When I looked at it the first time after the program had done its thing and stitched all the shots together, I was disappointed, as it seemed there was a flaw about a third of the way from the left hand side, where the fence rail looks split and offset. Sometimes this happens when the photos being used to make a panorama aren't just right.
However, upon closer examination, I realized that it was not an artifact of the software -- that chain link fence rail was, in fact, separated at that point.
Hopefully, when I next ride up Mount Sugarloaf to take some sunset photos, I will time it better. But I still like this image. -- PL
Posted by PL at 6:56 AM No comments:

More turkeys in the yard

I haven't blogged much lately -- I think it's mostly been from a bit of "blog fatigue". (Hopefully, that's not just a rationalization for laziness.)
I suppose part of it too may be due to the fact that it is summer, and we're finally having some stretches of good weather after all of the rain in the spring.

Anyway, at the risk of inducing "turkey fatigue" in the readers of this blog, I have to share at least one photo from yesterday. When I came home, I spotted our flock of turkeys nonchalantly strolling past the front of our house, and I managed to quickly roll down the window of my vehicle and get my camera out in time to capture some images. This was my favorite. 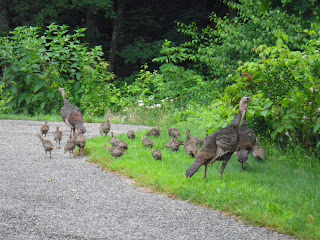 I kind of like the fact that this group of birds feels comfortable enough in our yard to make it part of their weekly perambulations. -- PL
Posted by PL at 6:36 AM 2 comments: