A short review of "Pacific Rim" 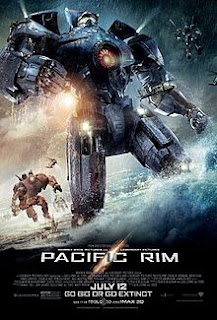 I intended to write a brief review of "Pacific Rim" right after I saw it about a month ago, but it is a measure of just how underwhelmed it left me that I neglected to do it until now. Part of it might have been due to a certain reluctance on my part to criticize too harshly a movie which was clearly made with all good intentions.

I went into the theater expecting to enjoy it, having gotten revved up for it from the various trailers I'd seen before the movie's release. Plus, earlier in the summer, I'd had the great pleasure of meeting some of the guys who'd worked on the visual effects for "Pacific Rim"  (as well as "The Avengers" and several other effects-heavy blockbusters) -- they were alumni of the University of Massachusetts at Amherst (as am I) and had come back to UMass as part of an event held at the school. It was very interesting to talk with them about CGi and special and visual effects. They were really nice guys who patiently answered all of my geeky questions.

So I was jazzed for the film, and enjoyed it, but came out of the theater even more convinced that we live in an age where way too much thought and effort is put towards how things look and far too little energy is expended on the story those effects are being used to support. "Pacific Rim" has some fantastic imagery -- in fact, much of the movie is simply crammed with a level of detail and realism which is staggering. It's all well done… on a visual level, at least.

I just wish more care had been taken to craft a story worthy of those effects. And in a film like this, which -- let's be honest now -- exists mostly because the director really, REALLY wanted to make a big-budget "giant mecha versus giant monsters" movie with state-of-the-art visuals, I don't think it's too much to ask that the action -- which is, after all, the main raison d'etre of the movie -- make sense and not be silly. Here's an example that really struck me as particularly dumb: One of the giant monsters, or Kaiju, is fighting one of the giant mecha, or Jaegers, in the ocean. The Jaeger grabs the Kaiju, and in an incredible display of power,  lifts it out of the water, over its head, and throws it…

That's right, it throws the monster back into the water. How, I ask, is this sort of move supposed to harm or even slightly slow down a giant creature which is totally at home in that environment? I'd have to watch the movie again to be sure -- and I won't be doing that until it comes out on DVD -- but I think this silly move is repeated one or two more times. It's just… dopey.

For whatever reason, the director -- Guillermo del Toro -- decided to not have the Jaegers stuffed to the gills with what you might reasonably expect giant mechanical fighting mecha intended to battle to the death giant creatures to be equipped with -- stuff like lots of stabbing and slashing and cutting weapons, missiles and rockets and artillery and other projectile weapons with explosive ordnance, high-pressure injectors to force bubbles into the Kajjus' bloodstreams and cripple them, electro-shock devices, flamethrowers, high-powered lasers, super-tough cable loops to strangle and decapitate, and so on -- all those wonderfully nasty bits of killing hardware you might expect to be created by imaginative weapons designers who want to WIN this freakin' war with the giant monsters. Every available surface (except those which have to be kept clear for smooth operation and movement of the Jaegers' limbs) should be studded with impaling spikes and ripping blades made to inflict maximum possible damage on the Kaiju during the Jaegers' close-in battles with these monsters. (Yes, I know there are a few such weapons on display, occasionally, but they are ludicrously few and far between.)

Instead, the Jaegers are treated for the most part like big boxing/wrestling robots -- punching, kicking, throwing and grappling with their opponents. It makes for some fun visuals, and they are amazingly well-done (it's quite incredible, for example, how realistic water simulations are these days, and a lot of the fights showcase these visuals as the Jaegers and Kaiju duke it out in relatively shallow water near the shore), but it's also… well, stupid. -- PL
Posted by PL at 5:45 PM 1 comment:

Some years ago -- it might have been as many as ten, perhaps even more -- I saw a nifty pocket tool online and purchased it. Called the PenTool, and made by KeyGear Corporation, it immediately became one of my favorite gizmos, and to this day, I carry one with me in my shirt pocket, every day.

It's gone through at least two iterations that I know of. That first one I purchased had a yellow barrel, and with the PenTool's hexagonal cross-section, resembled a standard yellow pencil… which was a little odd, because it had nothing in common with a pencil outside of that shape and color. The later models -- one of which you see in these photographs -- were all black, except for the tips, and they also incorporated a new bit of functionality in the form of a swing-out blade, partly serrated, in the cap. 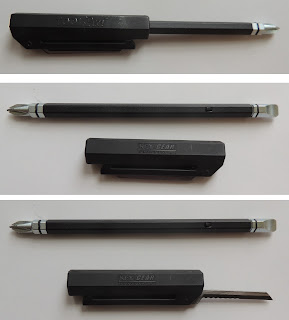 On one face of the hexagonal plastic cap, the name of the product -- "ToolPen" -- is molded into the cap, and two faces away from that is the name of the company which made it ("Key Gear Corporation"), also molded in.

Except for the body of the cap and possibly the pen reservoir which is hidden (and I've never taken one of these apart to see what it looks like), the ToolPen is all metal. While not a heavy-duty tool, it is solidly built.

It's also incredibly convenient, and I have used it hundreds -- no, probably thousands -- of times since I got that first one.

Unfortunately, since I bought those original ToolPens (and one year I purchased about a dozen or so to put in Christmas stockings), the product seems to have disappeared. I can't find a site online which sells them, and while I haven't done truly exhaustive searching, it seems that Key Gear Corporation is no longer in business.

Being a big fan of handy pocket tools, I have collected a number of them over the years, and have yet to find one as simple, convenient and useful as the ToolPen. I would hate to think that when the one I have wears eventually wears out or breaks, I won't be able to replace it.

So we come to the point of this entry -- I'm asking my blog readers if they have seen any ToolPens for sale anywhere online or in a brick and mortar store. If you have, and can point me in the right direction, I'd appreciate it! -- PL
Posted by PL at 4:16 PM 2 comments:

View from our new back yard 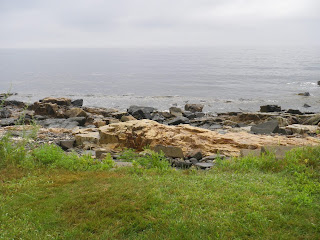