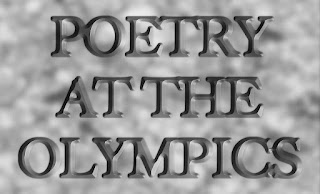 I'm not an athlete by any stretch of the imagination, but I think if the Olympics had an event for not being interested in the Olympics, I might just medal… or maybe at least make it into the competition. Personally, I think one of the most noteworthy parts of this worldwide ritual is how overblown the congratulatory self-regard of the athletes (aided and abetted by the breathless commentators) for their accomplishments can often be. I recall a few years back, hearing on the radio about some runner breaking a record, and that runner waxing effusive about how going a few seconds faster on a track had "rocked the whole world" or words to that effect.
Uh… sorry, no.
There is a great big part of the great big world for whom the Olympics is just one more news story out of thousands, and breaking records -- even "world" records -- is in the end merely a matter of temporary statistical change… and "the best in the world" is very often only the best in the world on that particular day.
So I was intrigued to hear on NPR today that there was a time when it wasn't just athletes, but poets, painters, sculptors and others in the arts also who took part in Olympic competition. It hasn't happened for some time -- I think the last Olympic medal given for poetry was in 1948.
But it's certainly an intriguing notion, and it could bring a whole new audience to the Olympics. Of course, by their very nature, such arts contests would require a greater attention span on the part of the audience than that required of most athletic events, which might be a problem.
Could be cool, though. -- PL
Here's a link to an interesting piece on the history of these nigh-forgotten Olympic games:
http://www.nytimes.com/2012/07/01/books/review/poetrys-relationship-with-the-olympics.html?_r=1&pagewanted=all
Posted by PL at 7:37 PM No comments:

Yesterday was a lovely sunny Sunday -- warm but not too hot. Perfect weather to drive up to the Bennington Museum to see their new exhibit of the paintings and woodcuts of Rockwell Kent.

I was somewhat familiar with his woodcut stuff -- he's probably most famous for his illustrations for a 1930 edition of "Moby Dick"* -- but I don't think I''d ever seen any of his paintings. 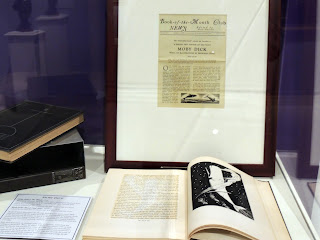 It's almost always a nice drive up to Bennington, and this time we took the route from Brattleboro, VT over Route 9 heading west. This allowed us to stop briefly at the Vermont Deli in Brattleboro to pick up some food for lunch -- a great place with great food, and I was surprised that with all the people crowding it we were able to get in and out within minutes. Sheer luck, I guess.

The exhibit of Kent's work focused mainly on the landscape paintings he did while living in Vermont, but also featured some of his print work, both wood engravings and lithographs. His work, especially the prints, definitely has an Art Deco feel to it, but I think the paintings reminded me a lot of the art of Georgia O'Keefe, both in the color palette and the abstractions of shapes. 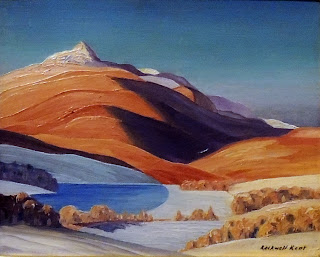 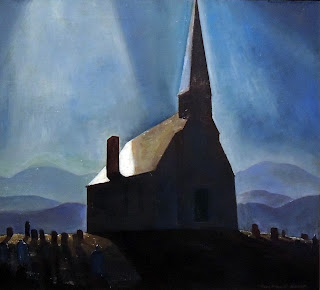 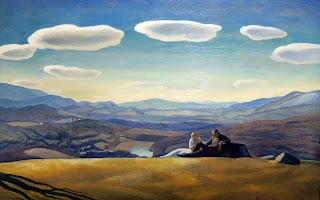 Regrettably, I did not write down the title of this next painting of a quarry or mine, nor was the photo I took of it and its "tombstone" (the card describing the painting) of sufficient clarity for me to garner that information from the image. But I think of all the pieces in this show, this is the one which caught my attention the most. 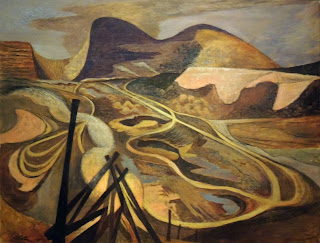 It really does hover most effectively in that unquiet space between a recognizable scene and total abstraction. -- PL

(07-28-12 Correction: This painting is NOT by Rockwell Kent, as I thought it was, but by another artist who also lived in Arlington, VT, named John Atherton. It is titled "The Ore Pit" and was painted by in 1947. Thanks to commenter "jfranklin" for the correction!)

P.S. As I did in my blog entry about the Howard Pyle show at the Norman Rockwell Museum, I have to note another "tombstone" with errors on it at the Rockwell Kent exhibit. Here it is, with the problem areas boxed in red: 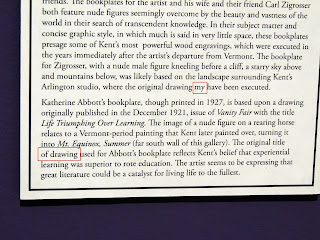 As you can see, "my" should be "may", and "of drawing" very likely was meant to read "of the drawing". (And no, I am not obsessive about looking for these kinds of mistakes -- these are two that just popped out at me.) -- PL

… and which, weirdly, are described as "PEN, BRUSH, AND INK DRAWINGS" in the Wikipedia entry on Kent, as are many other of his book illustrations -- all of which, I am fairly certain, were wood engravings.
Posted by PL at 8:20 AM 3 comments:

A few days ago, I was sitting on the porch with Jeannine, enjoying breakfast in the cool morning air, when she mentioned that it might be fun to go sometime to the new Howard Pyle exhibit at the Norman Rockwell Museum. My interest was piqued -- I've always loved Pyle's work, especially his illustrations of Robin Hood. Given that I had nothing particular planned for the day, I suggested that we not wait, and go that day, and she agreed. 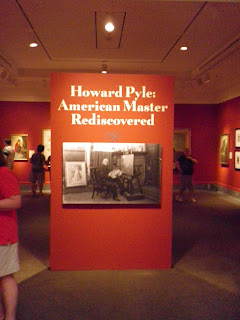 The show was great -- many of Pyle's original oil paintings were on display, as well as some watercolors and a goodly number of his black and white ink drawings. One of the paintings -- I think it's titled "The Mermaid" -- is one of Pyle's best-known works and one I have seen reproduced many times in books and on prints and posters. 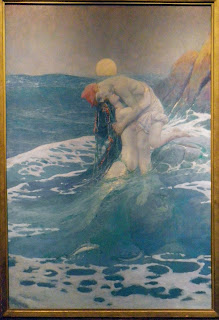 However, it was not until I got close up to the painting that I noticed a really nice detail… 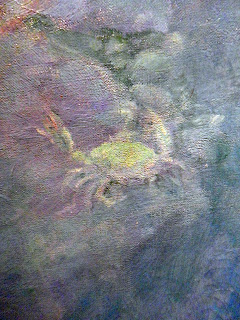 … clinging to a rock under the crashing surf is a little crab.

I am so used to thinking of beautiful color when considering the work of Howard Pyle that this painting, an illustration from an edition of the works of Nathaniel Hawthorne, surprised me with its monochromatic look. 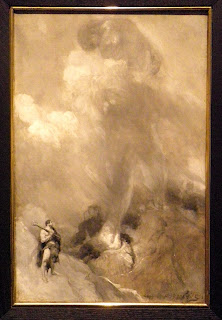 I was also struck by the way Pyle had rendered the giant in such a way as to emphasize his great size by painting him in soft, almost cloudy tones, as if seen from a great distance through the haze of intervening air, while the human in the lower left is rendered in harsher, more solid shapes and tones. 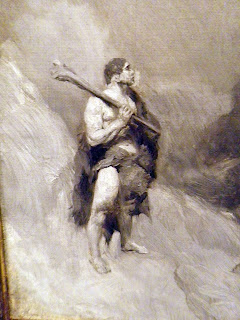 The influence of Pyle on the later works of Frank Farazetta is clear to me in this closeup detail of that human figure… it puts me in mind of a number of the cavemen which Frazetta painted.

There were many pieces which dealt with scenes set on or near the ocean, but I think my favorite was this one, an illustration of the "Flying Dutchman" from a story in Harper's Monthly Magazine. I love the way Pyle achieved the look of the foam on the ocean's surface in this watercolor… and the composition is brilliant. 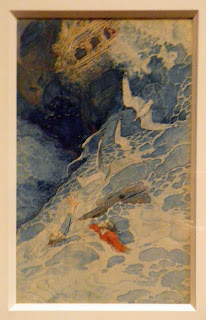 I really enjoyed the show, but I have to mention two things which caught my eye, two silly mistakes that struck me as pretty obvious… and made me wonder about the process of putting together shows of this nature.
The mistakes were on two "tombstones", those descriptive cards which accompany the pieces hung on the walls and also those in display cases. One of them was for a print by another artist, something which had inspired Pyle. As I read the card, I noticed this mistake:

… the unnecessary repetition of the word "the".

Moving into another gallery (if I am remembering correctly, the show occupied four rooms in the museum), I was looking at some examples of books with Japanese prints in them from which Pyle had derived some inspiration, when I noticed the following: 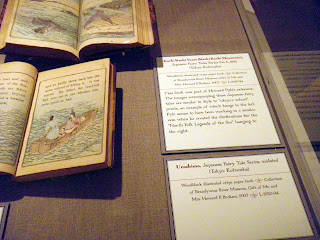 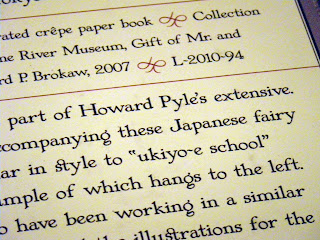 Obviously, the word "extensive" should have been followed by another word like "collection" or "library".

As we were leaving the museum, I spoke to a woman at the front desk and told her about these two errors. She listened to me politely and seemed to be somewhat concerned, but also said she didn't know if they could be corrected, as the show had come from another museum, and the cards belonged to that museum.

So how did these mistakes survive through one exhibition and into another? It seems pretty absurd to me that such obvious errors could not be caught with even slightly careful proofreading. I am pretty certain that I am not the only person who noticed these things, so it is pretty likely that in the show's previous incarnation someone MUST have mentioned them. So why no corrections? I know it's a minor point (or two minor points), but it seems to me that when you are putting on an important show of a major artist like this, you would want to have it as perfect as humanly possible.

Having enjoyed the show, and beginning to feel slightly peckish, Jeannine and I considered our food options. We checked out the Rockwell Museum's cafe, which was a pleasant space but only stocked with pre-made sandwiches, most of which had some variety of (gag!) mayonnaise slathered on them. Then Jeannine remembered something from our last trip to the Rockwell -- on a whim, I'd taken the road from the museum in the southerly direction, to see where it went, and as it turned out, it took us to Great Barrington, not far from one of our favorite restaurants, Xicoh Ten Catl. 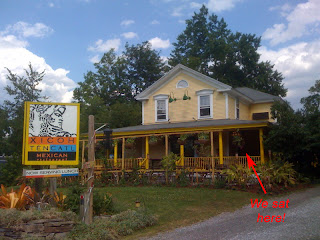 The idea of fresh, delicious Mexican food won out over stale mayonnaise-ridden offerings, so off we went. Xicoh Ten Catl did not disappoint -- we got a table outside on their shady porch, the air was slightly cool and soft, and the simple meals we ordered (a vegetarian burrita for Jeannine, the chicken version for me) were just perfect.

We followed the meal with a casual stroll around downtown Great Barrington, doing a little shopping, and then headed home, with one more stop in Hinsdale for a soft ice cream. Not a bad day. -- PL
Posted by PL at 8:31 AM 1 comment: