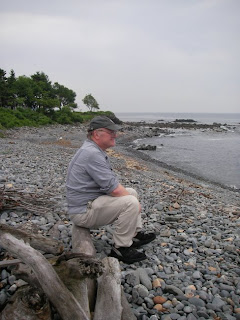 Back from the Heroes Con, now on vacation... here I am taking a break near the ocean. I enjoyed the time I spent with Jim and Eric driving down to and back from Charlotte, NC, but it's nice to relax in serene surroundings. -- PL


P.S. About ten minutes ago, this beautiful creature passed across the lawn of the house we're renting. (Just beyond that little dirt road is a pile of stones, then the ocean.) It's amazing how many of these animals you see this near the ocean. -- PL 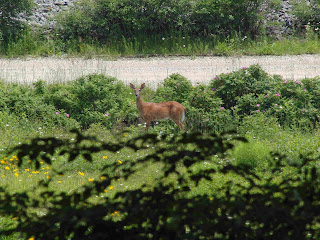 Today my daughter invited me to go to dinner and to the movies as a way of celebrating "Father's Day". We ate a nice meal at a Thai restaurant in Northampton, and then headed to Hadley to catch the new "Incredible Hulk" movie at Cinemark.

I really enjoyed it -- almost as much as the recent "Iron Man" movie. The Hulk has never been my favorite comic book character, but I always enjoyed his appearances in the "Avengers" and "Defenders" comics, as well as his occasional battles with the Thing in various comics. I also watched every episode of the old "Incredible Hulk" TV show staring Bill Bixby and Lou Ferrigno. And although I enjoyed the first "Hulk" movie, it didn't really thrill me.

This one, though, really rocked. The Hulk looked like he should, the action was incredible (no pun intended), and I just loved the little references inserted at various points for the geeks in the audience. And Robert Downey Jr.'s cameo at the end as Tony Stark was great. Well done! -- PL
Posted by PL at 7:22 PM 20 comments:

I made up this word the other day when I was out riding my bicycle and musing about email, my blog and the Internet in general. The way I would define it is "the antipathy and/or hostility encouraged by the use of anonymous 'handles', or pseudonymns, when communicating on the Internet". I believe that when people are able to post messages or comments in this fashion, they are more careless about what they say, and more likely to be deliberately cruel, rude or pointlessly disruptive.
But beyond that, I have to say that I'm getting a bit weary of talking with pseudonymns. I want to know who I'm communicating with. To that end, from now on I am going to ask anyone who posts a comment on my blog to please "sign" it at the end with their real name, first and last. If you feel you can't go that far, at least sign your first name.
Depending upon how this works, and how my feelings about "anonenmity" evolve over time, I may make this a requirement for posting comments. Or not. -- PL
Posted by PL at 11:20 AM 56 comments: 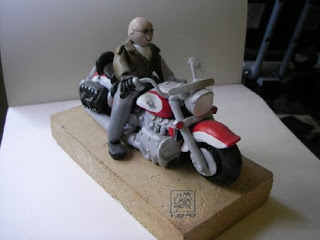 I had forgotten about this "gift sculpt", mostly because -- for some reason I can't recall -- I didn't display it in my old studio with all of the other Sculpey gifts. Instead, I put it on a shelf in my house where it got hidden among some other stuff. 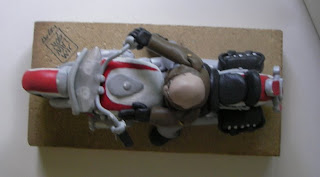 Which is unfortunate, because this is yet another beautiful piece of Jim Lawson artistry. Done in 1997, it portrays me astride my Honda Valkyrie, a bike I still own. 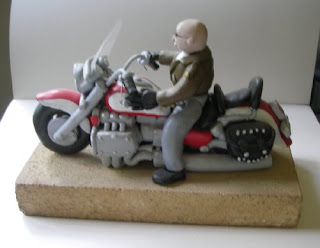 The Valkyrie (which is no longer produced, sadly) was a real departure for Honda. They took the awesome flat-six 1500cc engine from the Gold Wing and put it into what you might call a "cruiser-style" frame and running gear. I loved it immediately, and bought one of the first year models. It doesn't have all the bells and whistles of the Gold Wing, but you get that same smoothness and wide spread of power from the six-cylinder engine. It's very comfortable, handles great, and looks very cool. Honda made a few more variations, including one which edged back toward the Gold Wing a bit, with a stereo system, cruise control, and hard luggage. (I bought one of those, too, but recently traded it in on another bike.) And then they stopped making them. Bummer. -- PL

P.S. To show you what the real thing looks like, here's my brother Bruce with my Valkyrie a few years ago. 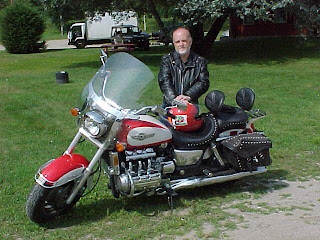 A couple of you -- I think it was "tokka" and "machiasbanshee" -- expressed interest in seeing what my Triceratops collection looked like. These following photographs represent a large portion of what I have, though not all. -- PL 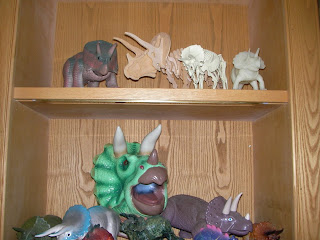 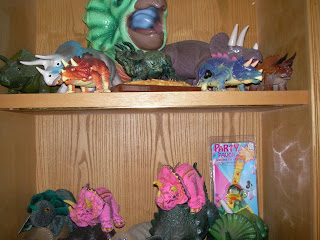 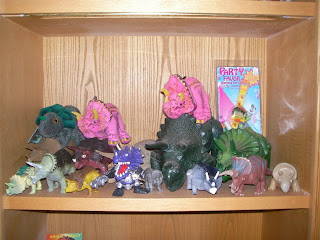 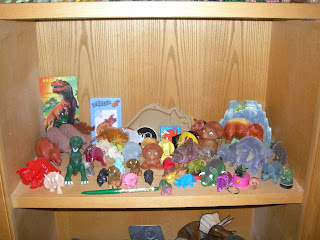 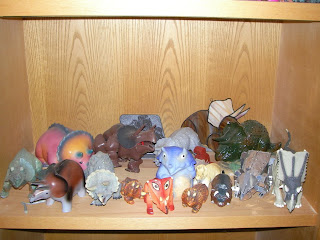 Putting up that drawing I did for the "Art of Usagi Yojimbo Book" the other day reminded me of one of the fun times that I had with Stan Sakai, and this photo in particular. 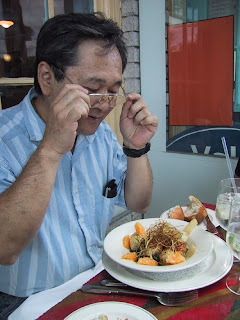 I took this at a small restaurant in Bethesda, Maryland, when Stan and I were attending the SPX (Small Press Expo) in 2000 -- a really excellent show just bursting with energy and creativity. I had been to it the previous year, and I'd never before seen so many small press and independent comics creators and publishers in one place. It was really quite inspiring. I got to meet several Xeric grant winners who were there promoting their books, which was very nice. As I recall, Scott McCloud was there too, and I always like getting to see and talk with him.

One day Stan and I walked around the neighborhood next to the hotel we were staying in, looking for a place to eat, and found this funky little place with a few small tables outside (always my favored place to eat if the weather is good). As I recall, I thought the waiter looked like a young Jack Kirby. They had an amazing "golden gazpacho", which I got and thoroughly enjoyed.

I couldn't tell you what it is that Stan is about to eat here, but if I'm remembering correctly, he enjoyed his meal too. (I have found that Stan is quite the adventurous eater... probably a good thing, with all of the traveling that he does.) I just love the way he's giving it the "once-over" in this photo. -- PL
Posted by PL at 6:09 PM 9 comments:

I may as well face facts -- I think my old "Blast From The Past" (http://www.planetracers.com/blast/prblastarchive.html) section at the "Planet Racers" website is pretty much dead. I had a lot of fun with it, and I'll probably leave it up as an archive, but this blog thing is SO much easier and more enjoyable.

I hadn't yet run out of things to post at that site, so I'll probably end up eventually putting the remainder of the "BftP" items on this blog. -- PL
Posted by PL at 8:14 PM 4 comments: 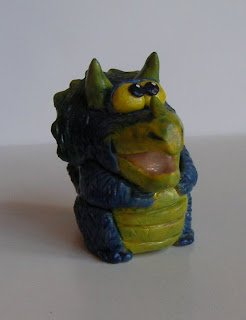 Here's yet another in my series of fun Sculpey gifts (notice a theme emerging?). Can you guess who did this one? 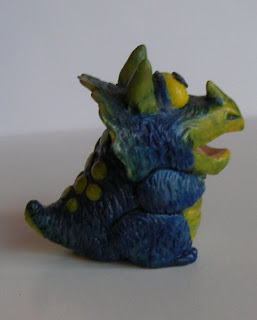 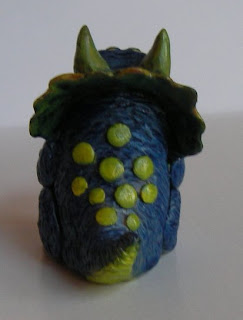 That's right -- it's the amazing Ryan Brown! Doesn't this thing look like it just popped out of a bubble-gum vending machine in Japan? -- PL
Posted by PL at 8:06 AM 5 comments:

Here's another one of those cool Sculpey gifts, a sweet l'il blue Triceratops. Can you guess from the style who the sculptor is? 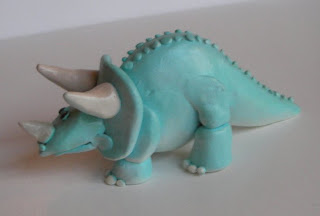 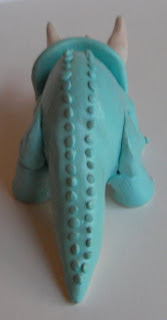 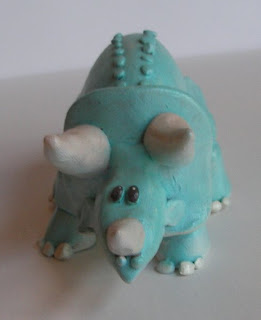 I don't intend to turn this into "DogBlog", but there was enough positive reaction to my earlier post about little puppy Parker for me to want to follow up with one of my favorite photos: 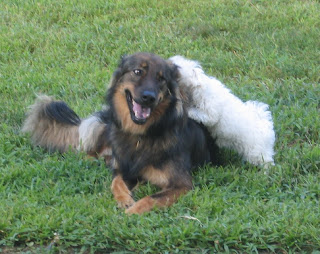 For those of you who wanted to see what Parker looks like now, here he is. The little white blob is also my daughter's dog -- a Maltese which she named Louis. In this photo, Louis has only been with us for about a week, and already he is boldly playing with Parker, who is about five times as big as he is. I have to give props to Parker for being very patient with the little beast.

One of the reasons I like this photo is that it kind of looks like Louis is whispering something into Parker's ear -- something surprising, to judge by Parker's reaction! -- PL
Posted by PL at 7:59 AM 10 comments: 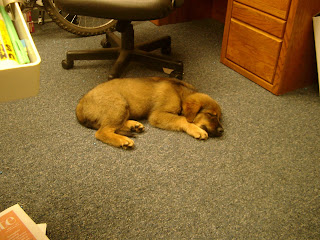 I ran across this cute photo today -- it's from 2002. The cuddly puppy in the photo, snoozing on the floor of my office at Mirage, is our dog Parker. (Actually, I guess he's technically my daughter's dog -- she convinced us to get him, and named him as well... after "Peter Parker", Spider-Man's alter ego.) I think this must have been only a couple of weeks after we picked him up from a local animal shelter. He's a lot bigger now, but still lovable. -- PL

P.S. As I was looking at this photo a bit closer, I kept seeing these little specks of blue on the carpet. I didn't know what they were at first, but when I zoomed in on the photo in Photoshop, it suddenly became clear, and what a blast from the past! Those little blue specks are actually blue plastic balls which at one time liberally littered the halls of the artists' side of the building, residue from our many manic "airsoft gun" battles. What a trip that was! I think some of the wooden door frames still bear tiny dimples from multiple hits.

I still chuckle when I remember Jim Lawson crafting a protective helmet out of a colander... effective, but pretty wacky-looking!
Posted by PL at 8:26 PM 8 comments: 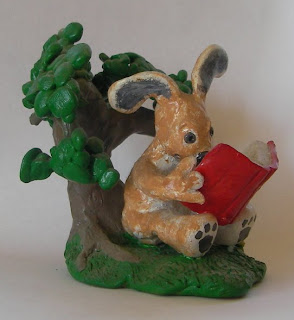 Years ago, inspired by my friends who made me all those cool Sculpey sculpture gifts, I tried my hand at it a few times. One of those few was this birthday gift for my wife, who is a writer. (She also likes bunnies.) -- PL 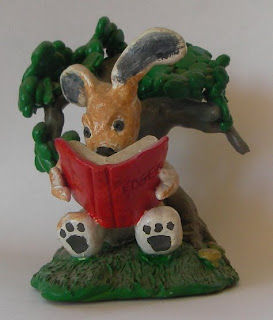 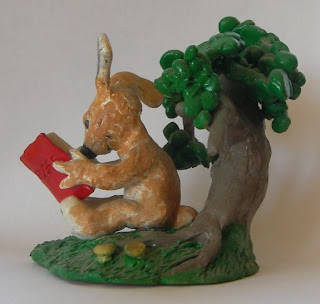 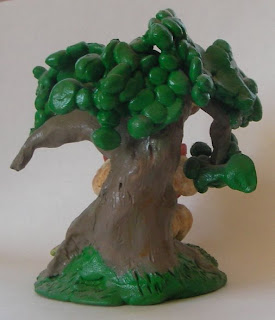