I was just made aware, via a comment posted today in my recent "Ask PL #11" blog entry, that CAPS, the Cartoon Art Professional Society, has started a fund-raising effort, though direct donations of money and donations of original artwork which will be auctioned, to try to help out Stan Sakai and his wife Sharon with the many expenses they have incurred recently as they have struggled with Sharon's health issues.

For more information, go to this link:

http://garageartstudio.blogspot.com/2013/11/help-stan-sakai.html
Posted by PL at 8:38 PM No comments:


A few days ago, I was apprised via emal that my old friend Norman Witty had passed away this week.

Norman (I never called him -- or heard him called -- "Norm") was a collector of and dealer in comics, records, books, magazines, and original artwork, among other things, operating out of his building on upper Main Street in Northampton, MA. I met him during my college years, when I would occasionally come over from Amherst to Northampton to shop for second-hand comics (the ones I could afford, that is) at his store, Omega Books. I remember that Norman was an admirer of Jack Kirby's work, and this led me into conversation with him. Eventually, I guess Norman thought I was smart enough to work for him on a part-time basis as a clerk in Omega Books, which was kind of a dream job for me.

I learned a lot from Norman in those years about comics, and comic art, and things collectible. I remember him showing me old magazines he would buy and sell to collectors, pointing out the beautiful painted artwork by illustrators such as J.C. Lyendecker. The first comic book convention I ever went to was in New York City, and I went there with Norman to work at his table in the dealers' room. I think it was at that convention where, with Norman's assistance (he pointed me in the direction of the dealer who had the art), I got my first piece of comic book art, a page from "The Mighty Thor" featuring artwork by Jack Kirby (inked by Vince Colletta), a page which I still have and still treasure.

I think I worked part-time for Norman for a couple of years, and during that period I would occasionally do drawings for him to be used in advertisements for Omega Books. Norman encouraged me in my pursuit of an illustration career, though he was always frank about when a drawing of mine was substandard, and I appreciated that.

One thing I remember doing for Norman during those years was helping him make the store sign for Omega Books which hung on the facade of his building. At the time, I still had access to the wood shop over at UMass, and I used that access to the power saws there to cut large letters out of masonite, letters making up the words "Omega Books", which would be mounted on a long strip of masonite and painted. (If memory serves, the "O" in "Omega" was actually the Greek symbol for Omega, Ω.) I think that sign stayed on the outside of the building for several years, and I remember looking at it from time to time and wishing I'd been more precise about the cutting I'd done around some of the letters.

When I moved away to New Hampshire and then to Connecticut, I lost touch with Norman, but when I moved back to the Northampton area I would occasionally run into him in town. He was getting increasingly hard of hearing in his later years, so it was harder to have a conversation with him, but it was always worth it, as Norman always had something interesting to say. -- PL

P.S. The photo above is of Kevin Eastman and Norman at a San Diego Comicon, probably in the mid-1980's. I apologize for the poor quality and wish I had a better one of Norman, but that's actually the ONLY one I have of him, as far as I know.

Getting ready to head home from downtown Northampton yesterday, I was struck by the beautiful colors in the sunset sky. Unfortunately, quite a few telephone poles and wires impinged on the view, but I managed to find an area of the sky view which was not so cluttered. 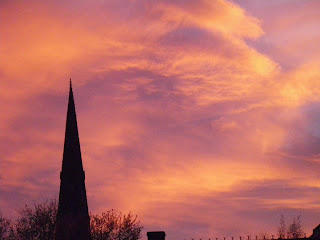