Blast from the Past #57 repost: "Interrupted Meal"

This isn't TMNT-related, but it is a blast from the past. I found this unfinished drawing in my files when I was looking for old TMNT stuff recently, and thought it was kind of fun. This was drawn back in the days when I was really into Barry Smith's barbarian stuff (probably late '70's or early '80's). I think I had just gotten a set of Prismacolor pencils and was trying them out. I can't remember why I didn't finish this drawing... maybe it was the idea of coloring all of those trees. 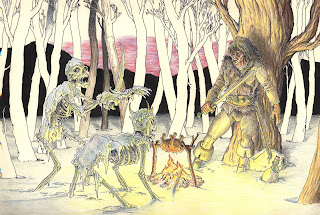 Although this is not my favorite drawing, it is representative of my favorite TYPE of drawing -- one that tells, or simply suggests, a story. In this case, are those skeletal revenants intending to do harm to the barbarian... or, awakened from an icy slumber by the warmth of his campfire, do they just want a nibble of the meal he is cooking? -- PL
Posted by PL at 8:35 AM 4 comments:

I used to make fairly elaborate Christmas cards, and for a few years I made "advent calendar"-type cards, incorporating the traditional twenty-four "doors" which are opened, one per day from December 1 to December 24, to reveal hidden surprises. For this one from 1983 (I probably drew it the same month the Turtles were created), I created this top layer depicting a fanciful Christmas-themed landscape. 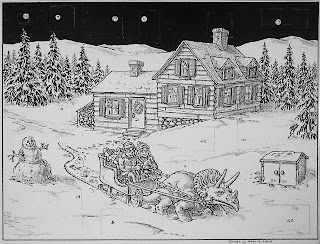 Then I drew this piece with the various images which would be revealed as each "door" was opened. This sheet would be glued (carefully, along the edges) underneath the top sheet. 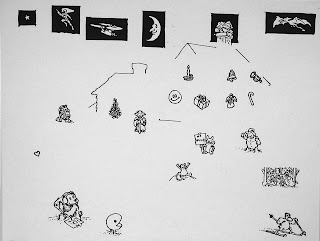 But that couldn't be done until after I had carefully pre-cut along three sides, with an X-Acto knife, each of the twenty-four "doors" so that they could be easily opened by the cards' recipients. I think this was the step that finally put me off doing these things -- it was a lot of work! -- PL

Blast from the Past #128: Robot fighting swordswoman 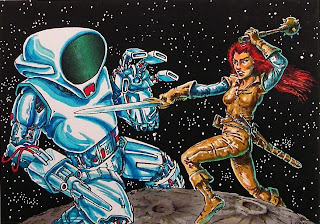 I wish I could remember exactly what I drew this genre-blending image for -- it might have been for a fanzine, though it is also possible it was my entry in one of the poster contests the UMass Science Fiction club used to hold. In any event, it was fun to draw, and I like the poses. -- PL
Posted by PL at 9:25 AM 4 comments:

Blast from the Past #127: Robot with birthday "cake" 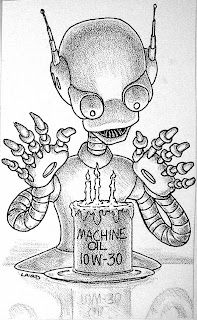 Turtle in the sun

The chill of winter is beginning to tighten its grip on Massachusetts, so I thought it might be fun to look at a photo taken during a much warmer day back in June of this year. 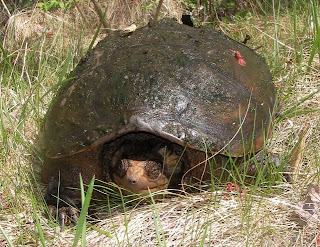 This turtle (I'm not sure what variety it is) was sunning itself alongside the bike path in Pittsfield, MA, and I stopped to snap a few photos. -- PL
Posted by PL at 9:21 AM 6 comments: 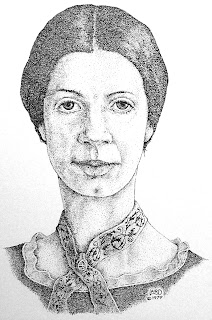 Blast from the Past #125: Flying dragon

This is another "done for fun" drawing from the pre-Turtles days. -- PL 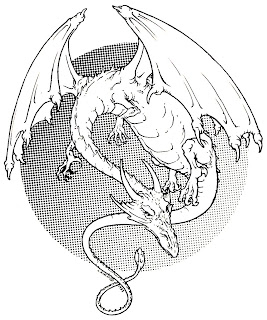 Blast from the Past #124: Spider on head

Here's another old drawing, which I think I did as an illustration for a story in a fanzine back in 1983. Kind of creepy, especially for the arachnophobic. -- PL 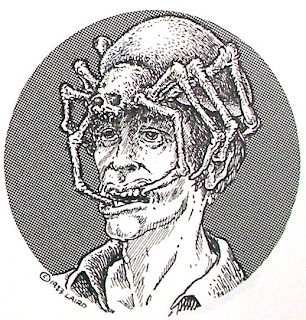 Blast from the Past #47 repost: "New Comic Day" pencils

This silly six page “dream” story, titled “New Comic Day”, was something I wrote and penciled -- back in the late 1980's or early 1990's, I think -- for one of the First Comics TMNT "graphic novels" (actually color reprints in trade paperback form of the early TMNT comics). Jim Lawson inked it. It was inspired by the ritual weekly trip the guys at Mirage would make to the comic book shop in the Mountain Farms Mall in Hadley, MA, on new comic day, which was on Wednesdays.

That ritual is, sadly, no more (as is that comic book store in Hadley). Now there are a couple of stores selling comics in Northampton that we go to. I usually get my comics-related stuff at "Modern Myths". -- PL 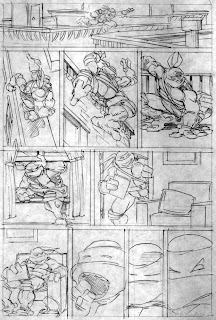 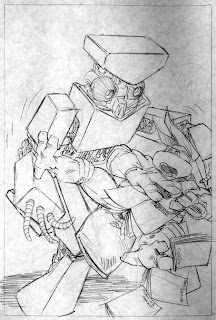 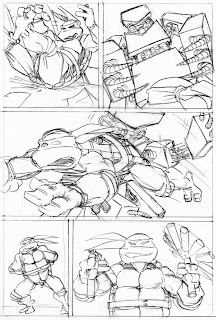 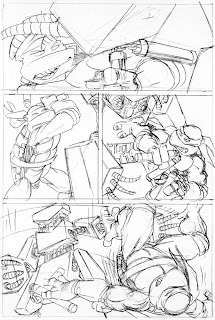 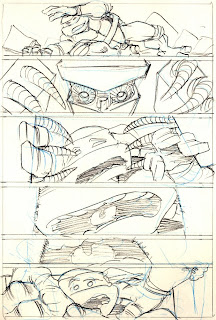 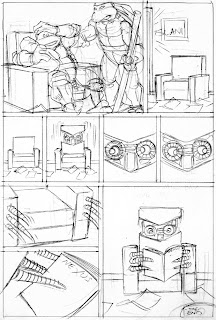 Blast from the Past #46 repost: Alien Snake Hunter

Here’s another piece from 1983, the early days of Mirage Studios, pre-Turtles. Kevin and I did a bunch of these together. He would take various black and white drawings I had done, make copies of them, mount the copies on foam-core board, and proceed to apply his marvelous colors to them, usually Dr. Martin's dyes. Actually, it was in large part because we both liked the results so much that we decided to form Mirage Studios. Below is my original black and white art, then below that is Kevin's color version. -- PL 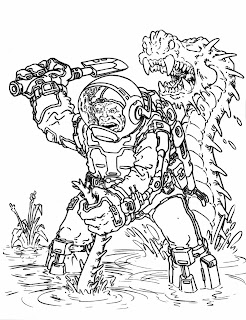 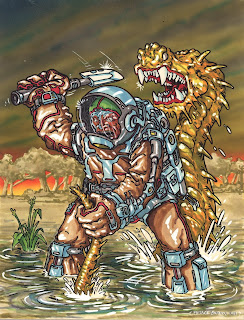