Yesterday was a hot one here in western Massachusetts, and my friend Rick and I decided to take our bike ride on one of the shadiest routes we know of -- the rail trail bike path from Northampton up to Look Park in Florence. We often do this, in large part because Look Park is just such a beautiful place to ride through.

Like many times before, we took a break for lunch on a bench overlooking the small pond at the park. While sitting there and talking, I noticed out of the corner of my eye an object which seemed to be making its way across the pond, but just under the surface. We were about a hundred feet away, so it was a little difficult to discern details, but I soon realized it was a big turtle! I would guess that it was about a foot and a half long.

I couldn't remember ever seeing a large turtle swimming like this. I've seen similar beasts sunning themselves on rocks or logs near water, but never cruising along just under the surface. I tried to get a good shot of it, but my little pocket camera could only manage these: 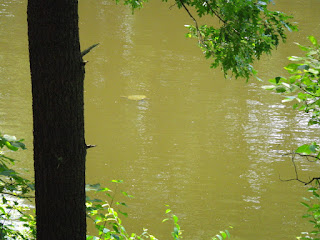 Here's a cropped version of the second one: 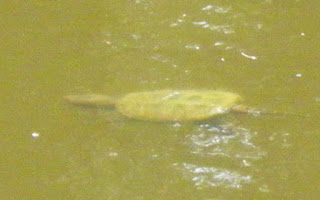 Though I couldn't see a lot of detail, I think it looked like a snapping turtle. -- PL
Posted by PL at 6:36 AM 8 comments: