One of my favorite characters created by Jack Kirby is Etrigan, the Demon... and back in the days of Sculpey presents, I received several very cool renderings in this medium from some of my Mirage pals. Here's one -- see if you can guess who made it. 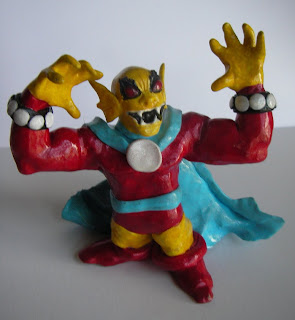 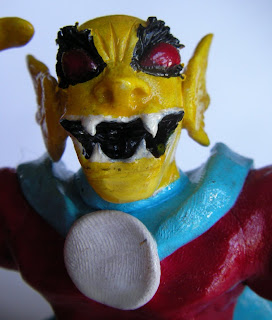 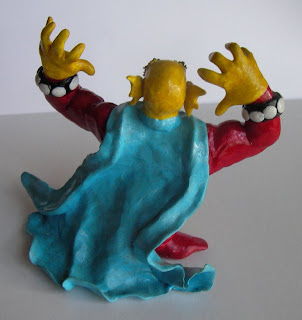 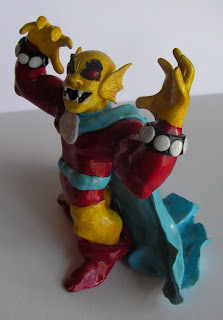 In case you are not a fan of "The Demon" books by Kirby, the title of this blog post may seem a bit obscure. It's the first line of a rhyme that Jason Blood would recite to tranform himself into Etrigan, the Demon... and I was such a big geeky fan of the book that I actually memorized it and remember it to this day.

No, I'm not talking about cussing. This is the first of a probably continuing series of blog entries in which I rant a little bit about what I consider to be poor usage of English, stuff which bugs the heck out of me.

This first one has to do with a bit of ridiculous hyperbole found all too often in advertisements for movies. It usually takes the form of a phrase like "A Tale Beyond Imagination!" or "A Story Beyond Imagining!" or some equally nonsensical variation. Think about it -- "beyond imagination"? Obviously not -- a whole bunch of people imagined the heck out of it, and made costumes, props, cast actors, devised special effects, wrote a script and imagined all of the myriad of things required to get a movie on the screen. Literally, NOTHING in ANY movie (or anything created by any human being) is "beyond imagination".

I see the usage of this type of phrase as an example of sadly deficient imagination on the part of those in charge of publicity -- it's a truly lazy, silly shorthand for trying to say how mind-blowingly awesome a movie is, when in point of fact it probably isn't anything of the sort. And there is an insulting subtext to it, too -- they're saying, in essence, that their movie is beyond YOUR imagination, you dull, stupid ticket buyer. -- PL
Posted by PL at 2:08 PM 29 comments:

Along came a Spyder 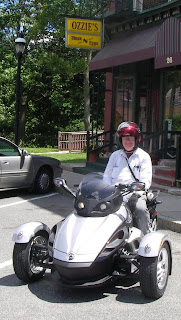 I picked up this new vehicle yesterday -- doesn't it look like it belongs in a scene from "Planet Racers"?

This is the new Can-Am "Spyder", a three-wheeled motorcycle (although that may be an oxymoron in this case). It drives -- or rather STEERS -- like a car, which is taking some getting used to. But it's fun!

This photo was taken by my friend Rick -- returning to Northampton after picking up the Spyder at the dealership, we stopped for lunch on the way back at one of my favorite eateries: Ozzie's Steak 'N' Eggs in Hinsdale, MA. -- PL
Posted by PL at 7:14 AM 18 comments:

Somewhere in Arizona, seventeen (?) years ago

It's a beautiful sunny day here in western Massachusetts, and I'm about ready to head out for a short motorcycle ride. Thinking about that put me in mind of this photograph that's been hanging up in my old studio for many years. My friend Ed took this while we were on a break during our cross-country motorcycle trip to San Diego many years ago. I can't remember if this was on the way out or on the way back, but I do recall it was somewhere in Arizona. 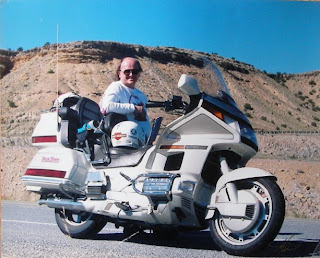 I loved riding through the desert -- it was quite beautiful for the most part, and the total antithesis, visually, of the type of terrain I ride through here in this neck of the woods. But the aspect that I wasn't too crazy about was the incessant, baking heat. I was fortunate to be riding the Honda Gold Wing -- years of development had evolved it to the point where the clever engineers who worked on it had devised very ingenious ways to route the engine's heat away from the rider (as long as you were moving, that is).

One of our groups' mottoes on this part of the trip was "Hydrate or die!". We made sure to keep plenty of water with us, and we went through a lot of it (or perhaps more correctly I should say a lot of it went through us). If you look closely, you can see one of my life-saving water bottles strapped to my back seat. -- PL
Posted by PL at 8:06 AM 17 comments:

Some of you may remember Louis, my daughter's little dog, from one of my previous posts. When we went on vacation last week, Louis -- for the first time -- came along with us. (In fact, it was the first time ANY of our pets ever accompanied us on vacation.) Louis behaved himself pretty well -- didn't bark very much, and didn't chew up the furniture in the rented house.

He also seemed to like the ocean a lot. Here are two photos of him communing with the briny deep. The first is one I took of him looking at the ocean out of the back porch window and listening to the waves. 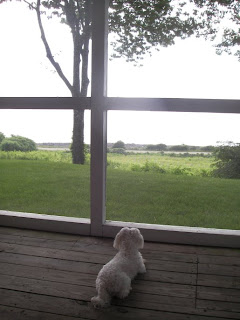 And this one was taken by my daughter when she brought Louis to the beach. Apparently Louis really enjoyed frolicking in the shallow water. -- PL 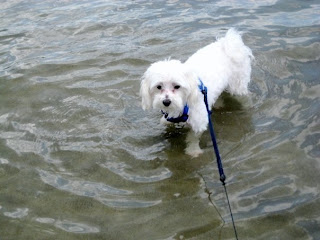 What kind of fruit would you say this is? 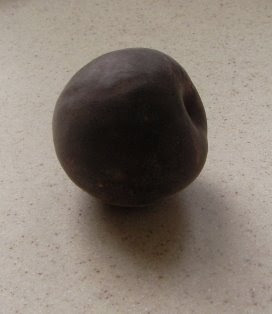 I found it yesterday while grocery shopping at our local Big Y supermarket, and bought a few of them. They're delicious.

I'd never seen an apricot with this color skin before -- all the ones I'd encountered previously had that kind of orange/yellow coloration. I'm a big apricot fan -- when I was a kid, it was a HUGE treat to get dried apricots. And this "black velvet" variety may just be my new favorite fruit. -- PL
Posted by PL at 6:40 AM 16 comments: