Back in the 1970's, when I had my "Little Used Book Shop" in Northampton, one of the nice features of it -- one of the nice features of self-employment, generally -- was that I made my own hours. Occasionally, during the day I had to run out to do errands or take a couple of hours for lunch or some such. To let customers know that I would be returning at some point, I made a variety of signs to hang on my store door. This is one of those signs. 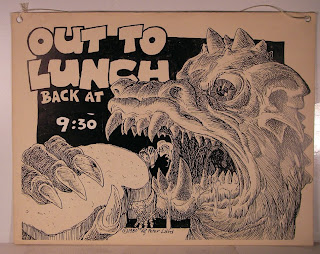 I constructed it with a wheel in the back that I could turn to indicate in a little cut-out window when I would be open for business again. -- PL
Posted by PL at 8:47 AM 3 comments:

A little post-Christmas miracle (of sorts)

Christmas 2009 is "in the books", as they say, and we had a good time. Jeannine made great food for Christmas dinner, my sister Chris brought wonderful desserts, my brother Bruce and I went crazy making juice with my new Jack LaLanne juicer, and it's wonderful to have Emily home, if only for a short time.

The celebration was a little more subdued than usual, without the energy of our dear friend Pat, who passed away this spring. But I was glad that her husband Ed joined us for Christmas again, an almost twenty-year-long tradition I hope he keeps up.

The house is quieter now, even with Em's friend and roommate Colleen visiting. The Fugitree is not long for the world (we'll probably leave it up for another week or so before I hack it to bits). I plan to carefully repack all of those 'Toids in their original boxes, maybe to use another year, maybe to sell. Anyone interested in a relic of the first (and so far as I know, only) Fugitree?

It rained pretty heavily last night, and continued into this morning at a lesser pace. I was startled when the rain stopped and the sun came out around noon today... and a thought crept into my mind. I stepped outside to gauge the temperature -- not bad, about 43 degrees. That's CERTAINLY warm enough for a motorcycle ride.

So off I went, after first bundling up warmly. I took the latest addition to the stable, a new Honda NT700V (aka the "Deauville" in the UK and Europe). I got this bike about a month ago, and only had a chance to ride it once before the weather got too cold and snowy. It felt great to be out on a motorcycle, even though I only rode out to the Williamsburg General Store for a coffee and pastry. The roads were clear (except for one back road I took which had a few icy patches, though only a few and they were very visible and easily avoided). I stopped on the way home by a swamp to take this photo of the new bike in a winter landscape which felt -- at least today -- like spring. 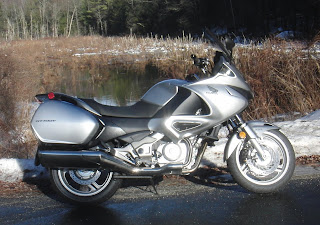 I don't expect this weather to continue, but I was grateful to get this unusual chance to ride on December 27... not something that happens too often in this neck of the woods. -- PL
Posted by PL at 1:01 PM 24 comments:

Blast from the Past #261: Moving to New Hampshire "Tag Sale" sign

This is a somewhat whimsical, quirky little piece whipped up in a hurry back in 1982, for a tag sale I was having in my apartment prior to moving to New Hampshire with then-girlfriend Jeannine. I can't really remember how successful it was, or how many people actually made the trek up to the third floor to go through my stuff. 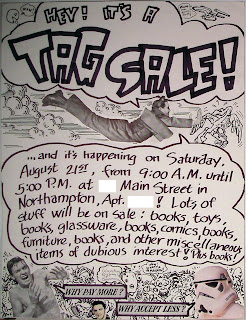 But as light-hearted as this little sign is, it actually signified a very big and serious change in my life. I was leaving a comfortable life in Northampton -- a town I'd lived in pretty much since graduating from UMass in 1976. I had a great studio apartment right in the middle of downtown Northampton -- low rent, heat included. I wasn't making a lot of money with my illustrating, but I had the steady gig with the "Daily Hampshire Gazette", and my expenses were pretty low. And I had never lived out of state -- in fact, I'd always lived either in my home town of North Adams or no more than sixty miles away from it.

Yet here I was, ready to drop all of this to move to another state, away from family and friends and work, to live in a town I'd only visited once (on a trip to find a place to rent), with a woman I'd been dating only a few months. I can't stress enough how unusual this was for me -- I guess it is a pretty good indication of how head-over-heels in love with Jeannine I was.

The fact that this move would bring me geographically closer to my new friend Kevin Eastman, who I had met the previous year in Northampton before he headed back to Maine, was a minor detail, and one I didn't think too much about among all the preparations for the move. But, as students of TMNT history know, it would turn out to have hugely significant consequences for us. -- PL
Posted by PL at 8:34 AM 7 comments:

Blast from the Past #260: Yoda and Taun-Taun Christmas card

Continuing with the theme of self-produced personal Christmas cards, here's one from the 1980's (the resolution of the image isn't good enough for me to read the date precisely). I always thought Yoda was the coolest character in the "Star Wars" movies, and the Taun-Taun one of the coolest creatures. 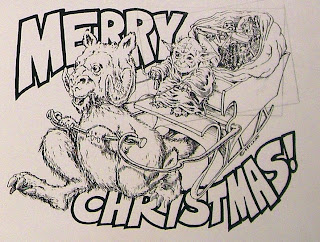 (On a technical note, I'm not sure why there are two rectangles drawn at different angles around Yoda and the sack of presents in this image. At first I thought they were paste-up lines, but on further inspection they appear to be drawn with pencil. Who knows? -- PL)

Continuing with the theme of self-produced Christmas cards, here's a slightly odd one, probably from the late 1980's. 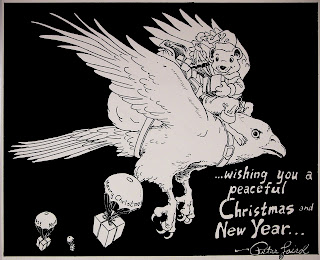 I really don't know what gave me the idea for this mouse version of Santa Claus, nor why I had him riding a bird. But I kind of like the drawing. -- PL
Posted by PL at 8:48 AM 2 comments:

Back around the time the TMNT were created by me and Kevin Eastman in Dover, NH, I bought a relatively inexpensive low-end food processor called a "Mouli". It was a simple device with interchangeable blades, well-suited to slicing, shredding, or grinding small quantities of various food items quickly and easily. Here's a photo of the Mouli in closed position... 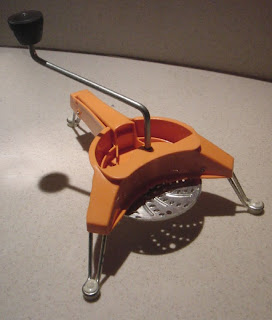 ... and here it is in its open position. 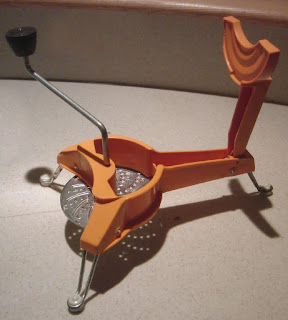 Believe it or not, this is the same Mouli that once grated carrots for the salads that we used to eat in Dover. This thing has survived almost twenty-six years and four household moves. It's still working well, though it is showing its age -- the plastic, especially the part which gets near the blades, has chipped in places, and the steel cutting discs are rusting in spots.

The device has little on it to indicate where it originated, though it does have the words "Mouli Julienne" molded into the plastic on its underside.

I'd like to buy a replacement... but I can't find any! A few months ago I spent several hours on the Internet searching for a place which might sell this type of Mouli, but the only ones I could find were in France and I could not figure out how to order from those sites. And I have kept an eye out whenever I go into kitchen supply stores, and have yet to find another one just like this one (actually, I would not mind if it were a different color, as long as it was the same design).

There are many other Mouli-type devices, but the ones I have run into don't seem to have the same simplicity and ease of use as this one, nor do they cut/slice/chop in the same way.

If anyone out there knows where I could find and purchase this product, and could steer me in the right direction, I would be grateful. -- PL
Posted by PL at 7:54 AM 6 comments:

Blast from the Past #256: Pasta Claus

Seeing as how we have entered "Christmas Month" (hard to believe the holiday is little more than a mere three weeks away), I thought I would pull out some old Christmas-related artwork. First up is this drawing that I am sure I did for "Hampshire Life" back in the late 1970's or early 1980's, but I don't remember what the article it illustrated was about. 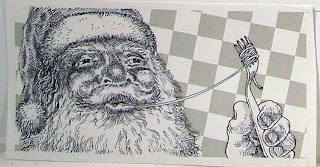 Maybe it had to do with serving spaghetti for Christmas dinner...? -- PL
Posted by PL at 7:19 AM 2 comments: