It's the king's birthday!

Just a few minutes ago I was reminded that today is Jack Kirby's birthday… and I know I've used this already in a blog post, but I think it deserves being posted again. 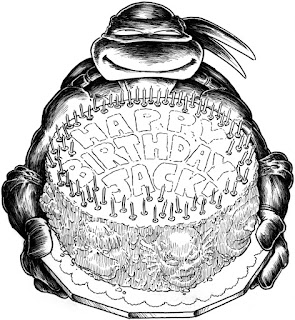 Happy birthday to the king of comics! -- PL

"(CNN) -- An elected county judge in Texas is warning that the nation could descend into civil war if President Barack Obama is re-elected, and is calling for a trained, well-equipped force to battle the United Nations troops he says Obama would bring in.

Saying that as the county's emergency management coordinator he has to "think about the very worst thing that can happen and prepare for that and hope and pray for the best," Head told radio host Jeff Klotzman that he believes "in this political climate and financial climate, what is the very worst thing that could happen right now? Obama gets back in the White House. No. God forbid."

For the rest of this mind-boggling stupidity, go here:

Is anyone surprised that this Todd Akin guy is a Tea Party member? -- PL

After thinking about this some more, and hearing much commentary about it on the news, it becomes sickeningly clear that the staggering idiocy of Akin's comments is all in the service of an anti-abortion talking point: To wit, if you get pregnant from what you claim was a rape, then you can't really have been raped, because women bodies can somehow prevent pregnancy in the event of a rape... and thus you can't get an abortion if the law allows for that option in the event of an unwanted pregnancy from a rape... because if you got pregnant, you couldn't have been raped... and so on... and so on... 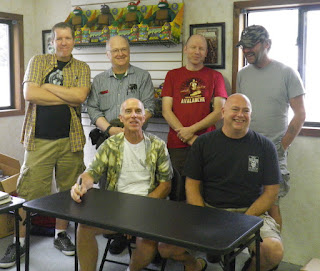 I had fun with the Mirage Studios crew -- Dan Berger, Mike Dooney, Jim Lawson, Eric Talbot, and Steve Lavigne -- this past weekend. We all travelled up from Massachusetts to do a signing at Steve's store "Shellback Artworks" in Wells, ME.

Here's a sampling of photographs from the event. (Of course, I followed my usual bad habit of not getting the names of most of the people I took photos of. Sorry!)

There was one gentleman who drove a LONG way to come to the signing -- I can't remember which midwest state he was from, but I think he easily took the prize for "most miles driven to get to Shellback Artworks". He brought with him a nifty vintage VW van toy, which we all took turns signing. Mike even did some "Turtleizing" of it, adding some shell texture to certain areas. 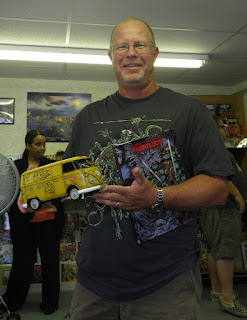 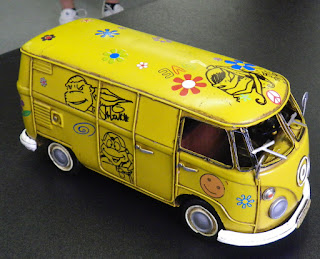 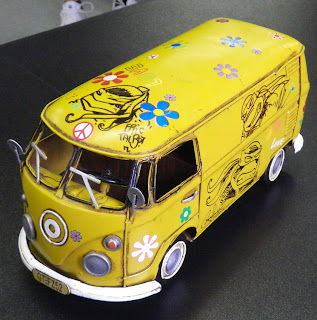 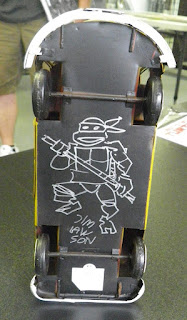 I think this next person's name is David, and after talking with us for a while and getting some things signed, we posed for a photo with him. Then he went to the local Wal-Mart and got it printed in a large format, brought it back, and we all signed it. 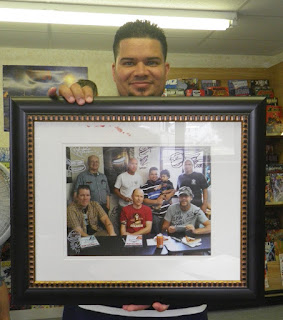 Cool idea! I had no clue that you could get prints done like that at Wal-Mart. 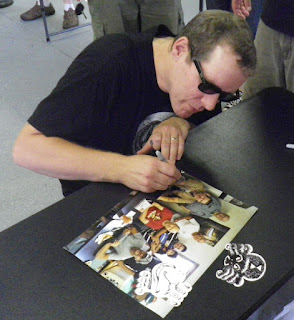 Chris Parlon and his girlfriend Katie, who were also at the grand opening signing, showed up for this one as well. 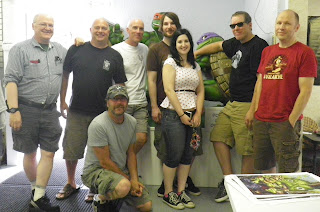 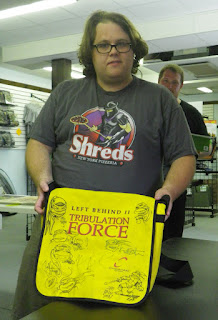 … and the back of this pizza box (which had previously held some of our lunch). 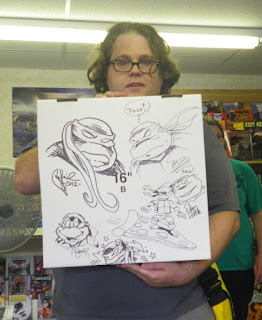 I have to draw particular attention to the thing Jim Lawson sketched on this box -- something that, in all the years of the TMNT, with all the references to pizza and surfing, has NEVER been done before (as far as I know): a Turtle surfing on a piece of pizza.

Genius! Jim, you're too much.

Here's Jim in the act of creation -- I was fortunate enough to be sitting next to him at the signing, and thus caught this moment for posterity. 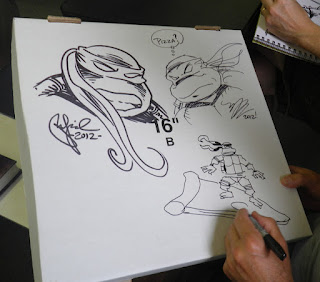 Mike took it upon himself to, um, enhance the image of infant April on the cover of this fan's copy of TMNT Volume 4 #22. 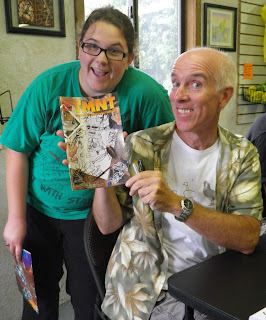 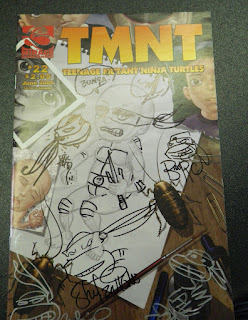 Here's Steve posing with one of his store t-shirts which we all signed. I don't know where the shirt ended up. 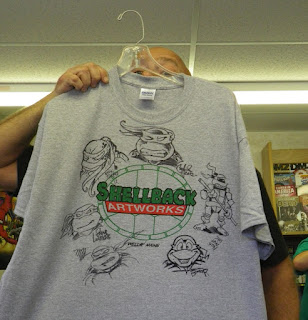 It was great to have Eric with us -- I hadn't seen him in months. He brought with him some blank stickers with the die-cut shape of a skull and crossbones (the result of a printing error) and invited us all to draw something on them. Here's a photo of Eric working on one… 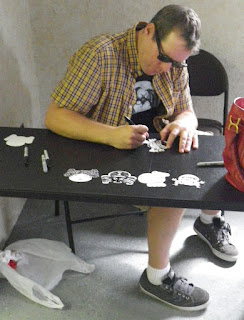 … and here are five COMPLETELY different approaches to using that space. Can you guess who did which?

A short review of "Breasts: A Natural and Unnatural History", by Florence Williams 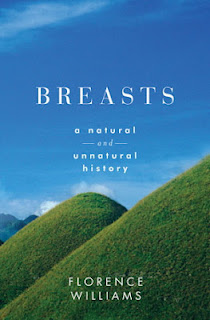 It's fascinating because it goes into great detail about a feature of human anatomy which I confess I had previously had only a mostly surface appreciation of. One of the most salient points the author makes is that, contrary to what one might think, even after all these years breasts are still in large part a mystery... and she makes a good case that far more research into them is warranted.

It's frightening because much of the book is about how many artificial substances find their way into breasts, and -- in the case of women -- breast milk, which then often finds its way into children. Many of these substances are outright toxic, and may have serious deleterious effects upon the health of mother and child.

"Breasts: A Natural and Unnatural History" is a very good book, and I recommend it to anyone with breasts... which is, I guess, just about everyone. -- PL

P.S. I have to mention one small error in the book, which seems to have slipped through the writing/editing process somehow without being corrected. It's the following line found on page 189, a line which compares the relative prices of breast milk and oil:

"At four dollars per ounce, it costs 262 times the price of a barrel of oil."

I am pretty sure what the author intended to say here is that breast milk, per ounce, is 262 times the price of oil, per ounce. But that's not what this sentence says. In fact, the more one tries to parse it, the more one realizes that -- as written -- it makes no sense at all.
A simple fix could be as follows:

"At four dollars per ounce, one ounce of breast milk costs 262 times the price of an ounce of oil."

Or, if more dramatic numbers are desired:

I'm sure there are other ways of saying it, but I thought it would be useful to give examples.

This is a minor glitch in an otherwise excellent book, but it definitely caught my eye as I was reading it. I suspect it probably had the same effect on some other readers.
Posted by PL at 7:16 AM 2 comments: 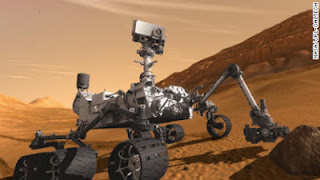 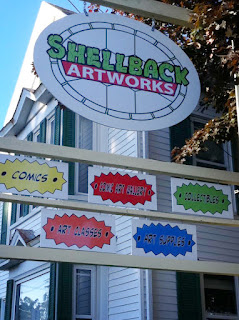 I'll be heading up to Maine next Saturday to do a second signing at Steve Lavigne's "Shellback Artworks" store, but this time I'll be sharing a table with Mirage Studios pals Dan Berger and Jim Lawson. (We're hoping Mike Dooney will go as well, but he hasn't made a final decision, as far as I know.)

A brief review of "The Dark Knight Rises" 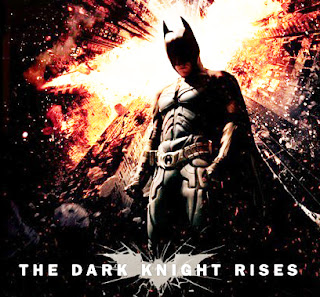 Last night, I went to the movies with my wife and daughter, and saw one of the silliest films I've seen in a while -- "The Dark Knight Rises". As I was watching it, I could not help but think back to the development period of the first live-action TMNT movie, when Kevin and I were struggling to work with the  writer the studio had chosen for the project. At one point, he turned in an outline in which the bad guys -- I think they were the Shredder and the Foot -- had imprisoned all the "good people" of the city in the sewers, and the Turtles had to rescue them and release them from their subterranean prison… after which the jubilant, newly-freed citizens  carried the Turtles on their shoulders through the streets of of New York City.

No, I'm not kidding.

Anyone who has seen "The Dark Knight Rises" will very likely recognize a similar -- and similarly stupid -- plot line.

There are some good things in the movie -- several pretty spectacular action scenes, and good performances from actors like Gary Oldman, Michael Caine, and Anne Hathaway. But…

… the overwhelming feeling I had as I watched the movie was this: The more "seriously" you treat the "Batman" story, the more obviously stupid it becomes. Director Christopher Nolan had hit the "sweet spot" in this regard with his first Batman movie, "Batman Begins" -- an intriguing take on the genesis of this tortured hero, with just enough updating and verisimilitude to sell the idea in a "serious" way. His follow-up, "The Dark Knight", was able to tread a similar fine line, though it occasionally tipped over the edge into goofiness.

But "The Dark Knight Rises" suffers hugely from the bloated sense of importance and significance that made watching Nolan's flabby "Inception" painful for me to sit through.

I'm glad he's done with Batman -- I look forward to future explorations of the character which might not be quite so pretentious… and silly. -- PL