I've already done one of these for the word "countless", but the lazy, stupid abuse of this wonderful word seems to be popping up a lot these days... or maybe I am just noticing it, for some reason.

A few days ago, shortly after I'd posted about how much I enjoy National Public Radio, I was driving in my truck and heard a music review on NPR about some musician -- I think he was a Brazilian in his seventies -- and the reviewer was enthusing about how this musician had "recorded countless albums".

It's such a mind-bogglingly stupid misuse of "countless" that it makes my head hurt.

Let's assume for the sake of argument that the musician in question is seventy-five years old. Let's also posit that he is an amazing prodigy who has recorded ten albums per year since he was twenty years old (obviously a ludicrous number, but bear with me). That's ten albums per year over the course of fifty-five years. Basic arithmetic gives us, then, a total of five hundred and fifty albums. I can count that high... can't you? Five hundred and fifty is so staggeringly, brain-bendingly not even close to "countless" that it takes my breath away.

There is no way -- not even REMOTELY -- that this musician, or any other, could have "recorded countless albums". -- PL
Posted by PL at 7:13 AM No comments:

I am a little reluctant to file the following under "WEFEing" (short for "Witless Exaggeration For Effect"), as it actually does contain a certain amount of wit, but I am going to include it here because other than that dash of wit, it does suffer from the same silly use of language that a typical example of WEFEing does.

I love National Public Radio -- it offers so much in the way of news and information and opinion, in an unhurried way which is so different from most other media. I mostly listen to it in my truck, or sometimes when I am working at home.

But it is not without its faults, small though they may be. One such tiny fault is contained within a short promo for NPR that I have been hearing on the local NPR station (WFCR in Amherst) often in recent months. It is this line, apparently from a Terry Gross interview with one Charles Fishman, author of a book titled "The Big Thirst: The Secret Life and Turbulent Future of Water". The line in question goes like this:

"Every drink of water you take, every pot of coffee you make is dinosaur pee."

Every time I hear this, it drives me a little crazy… because undeniably clever as it is in making the important point about how water is recycled ad infinitum, it is literally NOT TRUE. Yes, while that drink of water you just had may have, in whole or in part, once, many many many millions of years ago, been for a short time the urine of a dinosaur, it no longer IS. The ongoing cycles of purification through evaporation and condensation and/or filtering through the soil changed that dinosaur pee to just water.

See, that snappy line wouldn't have quite the ear-grabbing, attention-getting, gross-out effect if it read this way instead:

"Every drink of water you take, every pot of coffee you make was once dinosaur pee."

Of course, the less-snappy version of the line DOES have the virtue of actually being TRUE. -- PL

This was the view outside our bedroom window this morning.


While bicycling around Northampton with my friend Rick a couple of days ago, we kept hearing the thunder of fighter jets passing overhead -- unusual for this area. We stopped to get coffee at Smith College*, and, while sitting outside enjoying the warmish spring weather, heard the jets passing overhead once again.

I whipped out my little Pentax camera and managed to get a shot of the planes -- four of them -- as they roared overhead in a tight formation. I've NEVER seen that here before. 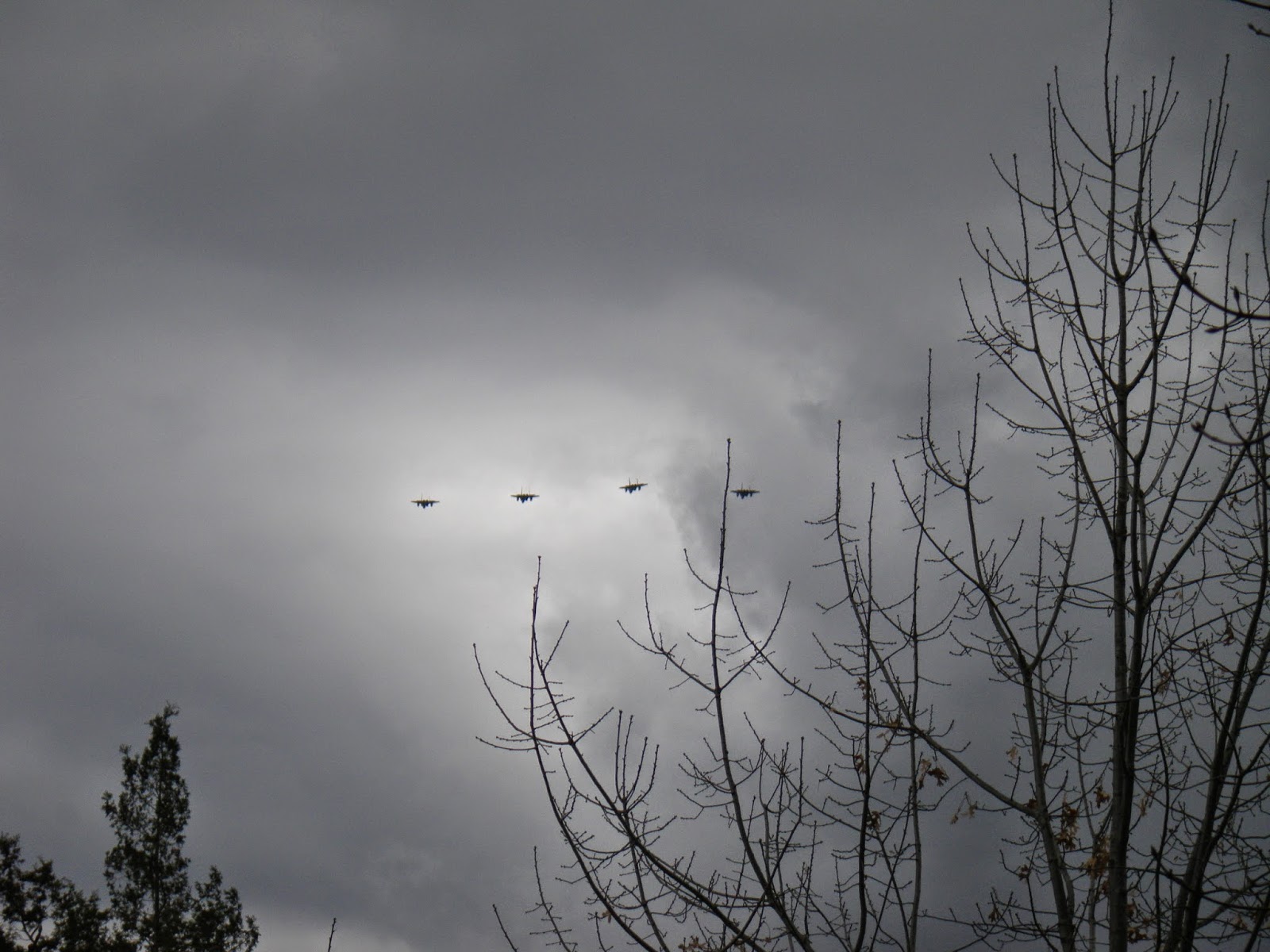 We speculated about what they might be doing -- Practicing for an air show? Getting ready to fight the Russians? Just having fun? -- but conceded that we really had no clue.

As we finished our coffee break and got back on the bikes to head back to Mirage Studios, the planes appeared overhead once more, this time with one of the pilots "waggling" his plane's wings. -- PL