May the Fourth be with you! 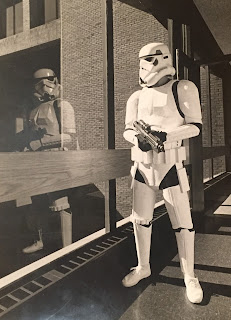 I have the feeling that I have posted about this before, though I can't recall for sure if I have. So please forgive my aging brain if you've read something like this previously!

I actually meant to post this a few days ago, on May the 4th -- now known in some circles as "Star Wars Day" -- but didn't get my act together in time.

Way back when I had my little used book shop (cleverly named "The Little Used Book Shop") in Norhampton, I took it upon myself to build a "Star Wars"-themed costume for Hallowe'en. I had been so taken with the extremely cool design of the stormtrooper costumes in the first "Star Wars" movie that I knew I had to try my hand at making -- as best I could -- a replica of one of those armored outfits.

However, I wasn't going to even try to recreate the stormtrooper helmet -- the multiple curved surfaces just seemed beyond my limited capabilities. So I ordered a replica stormtrooper helmet from a company out in California which was doing officially-licensed "Star Wars" headgear.

For the rest of the costume (except for the foot wear, for which I used some plain white tennis shoes, and the blaster rifle, which I picked up at a local toy store), I set to work building a framework using some nice flexible (but sturdy) cardboard from lingerie boxes I got from a local women's clothing store. As best I could, working from photos of the stormtroopers I found in various fan magazines, I constructed the various armor pieces with this cardboard.

I then mixed up a home brew of papier mache (basically flour, water and shredded newspaper), and used that to build up the shapes of the armor pieces, sculpting the curves and details.

When the papier mache had fully dried, I applied multiple coats of pure white gesso, the material painters use when preparing canvases. It not only captured the white color of the stormtrooper armor, but in multiple coats, it also gave extra strength to the pieces.

For the black under-armor garb, I bought a set of white long winter underwear and dyed them black, and sewed on strategically placed Velcro strips which corresponded to appropriately placed Velcro on the armor pieces, so that I could slip the pieces on and the Velcro would hold them in place.

The last and most vital piece to the outfit was the helmet. It was getting pretty close to Hallowe'en -- I think about three weeks out -- and I finally received the helmet in the mail. Or at least I thought I had at first, though the suspiciously light weight of the shipping carton should have given me a hint. When I opened up the box, it was empty -- no helmet! I immediately wrote a frantic letter and sent it off to Don Post Studios. About a week later, I got another box from them in the mail. I should have held my sigh of relief, given that when I opened the box, there was no stormtrooper helmet -- just half of a Darth Vader helmet!

Another frantic letter went out immediately, and finally, a few days before Hallowe'en, I got the right helmet. Whew! I couldn't fit my eyeglasses underneath it, so I couldn't see much while I was wearing it, but it looked great. I ended up using that costume for several Hallowe'ens, until the papier mache and cardboard started to disintegrate. I still have the helmet, though.

The photos which accompany this post resulted from a happy coincidence. I was. at the time, working on drawing the campus map for Amherst College (my first significant freelance art gig), and mentioned to the man who'd hired me (whose name, if memory serves, was Doug Wilson) that i had made this stormtrooper costume. He suggested that I bring it in and have a staff photographer (who I'd been dealing with as a source of reference photos for drawing that map) take some shots at various places on the Amherst College campus. So I got dressed up in the costume and traipsed around, posing for photos. 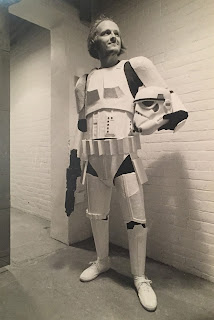 The photographer (whose name, sadly, I cannot recall) took a couple dozen shots, and somewhere I have the contact sheet showing all of them, but I only got a few of them printed as 8 by 10 prints.

Thinking back on it, I guess I was really "letting my geek flag fly" -- I don't know if I would have the nerve to do something like that today. -- PL
Posted by PL at 9:05 PM 6 comments: