"Meanwhile, back at stately Wayne rumor..."


Comicbookmovie.com is one of my favorite sites for information about upcoming movies based on comic books -- it's one of the sites I go to just about every day. It's generally a well-crafted site, but occasionally some goofy error will show up, such as the one you can see in my screen grab of part of this bit on the highly-anticipated "Batman vs. Superman" movie. 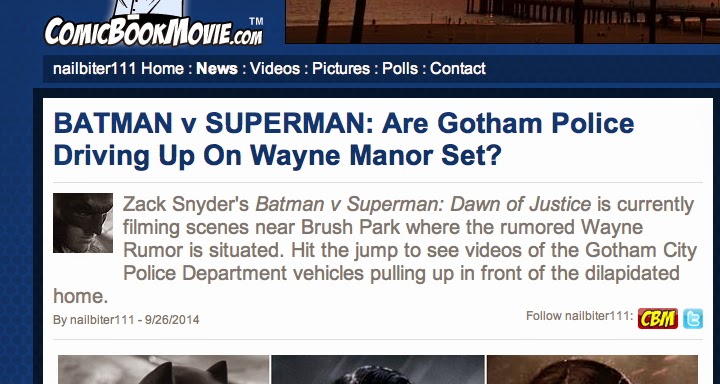 As I was coming down our driveway today, I was delighted to see another flock of wild turkeys making their way across our lawn. I took some photos and later counted seventeen of these regal birds in one of the images, so this might be the same group Jeannine saw last week. Here's my favorite shot of the bunch. -- PL 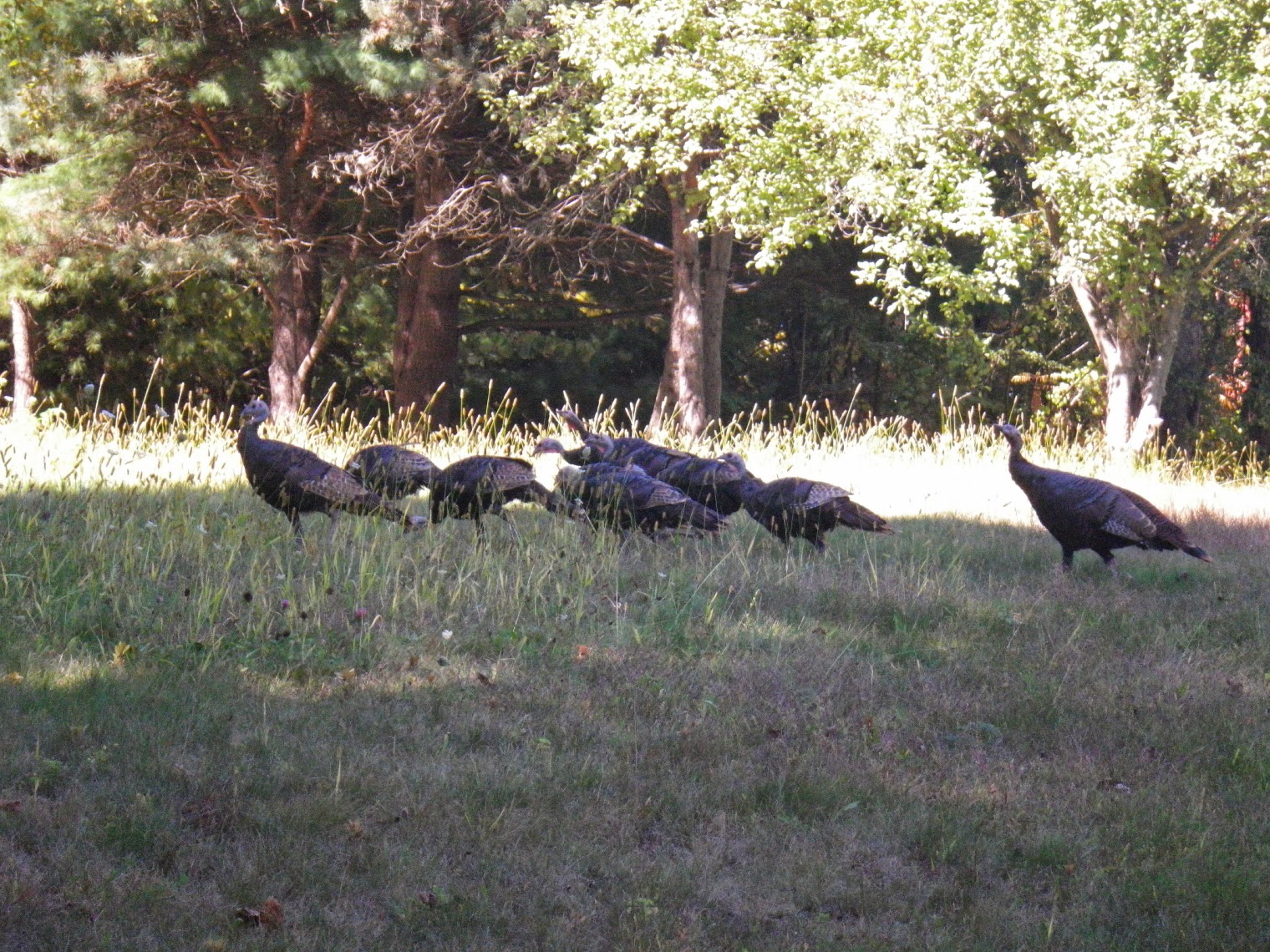 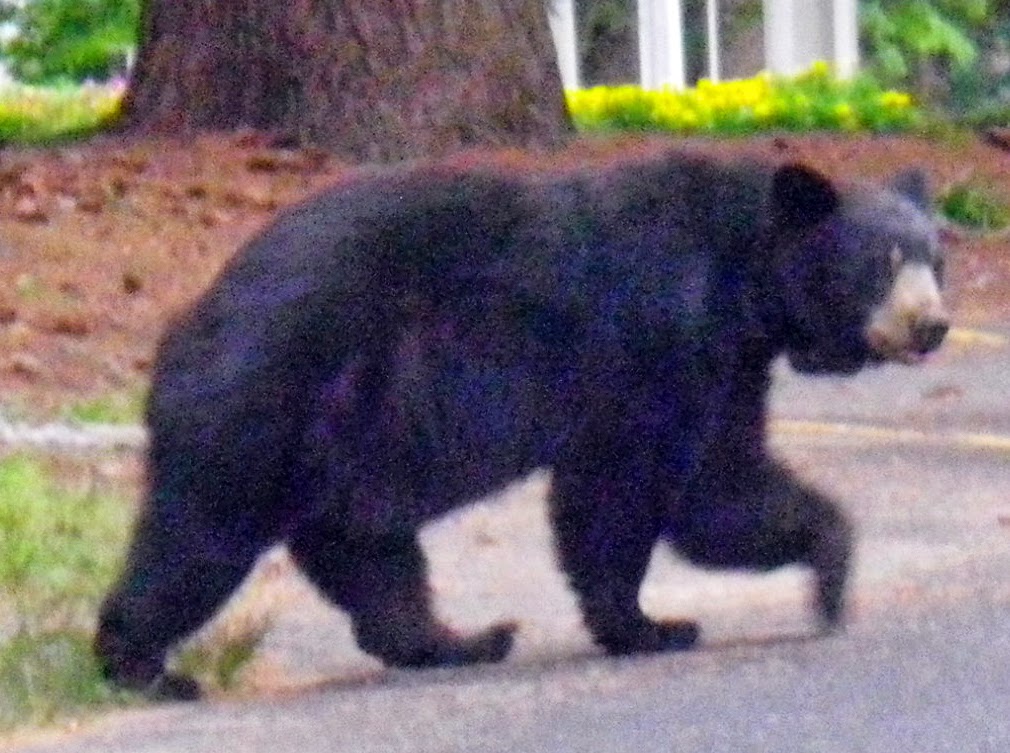 I was driving home today around 1:15PM, coming down Route 91 out of Brattleboro, Vermont. Just a few miles south of Brattleboro, on the east side of the divided highway (the side you take to go north) there is a relatively new, spiffy visitor's center. I was coming up on it as I headed south on the opposite side of the highway, and -- as I passed the entrance to the facility -- out of the corner of my eye I saw a large, furry black lump squirming its way under the highway guardrail just a few yards away from that entrance.

I was tempted to slow down and pull over, get my camera out and see if I could get a few decent photos, but figured that by the time I'd safely done that, I'd be pretty far past the bear, and it would probably have already completed its trek across the highway and gone off into the woods (barring its getting hit by one of the many fast-moving vehicles, of course).

So I just slowed down a bit, and kept my eye on it in my rearview mirror. Sure enough, in less than ten seconds the bruin had ambled/run across both sides of the highway and made it safely into the trees.

P.S. The photo illustrating this post is, of course, NOT the one I saw today -- it's a bear I saw on a bicycle ride last August in Northampton.
Posted by PL at 11:22 AM 4 comments:

Yesterday, as she returned home from a yoga class, Jeannine stopped in our driveway to count seventeen turkeys strutting around on our lawn. When she mentioned this to me as I greeted her at the door, I grabbed my camera and headed outside, thinking the birds might still be there and I might get one or two photos before they melted into the woods.

I did manage to snap a few photos, though true to form they didn't stick around too long, and in their stately yet curiously quick gait were soon lost to sight among the shadows under the trees.

This is a cropped version of one of the better photos, though it is a little blurry -- that's what happens sometimes when I'm trying to quickly get a few shots before the opportunity vanishes. -- PL
Posted by PL at 9:37 AM 1 comment:

Acts of kindness for our furry friends

A friend's recent Facebook post about an act of kindness which allowed three black bear cubs to escape from a Dumpster ...

... reminded me of something that happened to me a few years ago. I'd gone outside with a bag of trash to toss into our Dumpster, and when I opened the lid, I was startled to see a bedraggled creature moving around inside among the few bags of trash in the Dumpster.

It was a raccoon, which had apparently found its way into our Dumpster by prying up one edge of one of the plastic lids, and had a wonderful time tearing open all of our plastic trash bags in search of edibles, but made a potentially fatal miscalculation -- there was not enough volume of trash inside the Dumpster to allow it to climb out. I'm not sure how long it had been in there -- probably not much more than a day or two -- but it looked absolutely miserable.

I had to help it get out. However, as I understood that handling a wild, dirty and probably pissed-off raccoon is generally not considered a highly recommended activity, I opted for carefully placing the trunk of an old Christmas tree into the Dumpster. It was long enough to reach above the level of the top of the Dumpster, and had plenty of branch stubs to act as paw holds for the raccoon.

Sure enough, about a minute later, from a safe distance, I saw the raccoon's head poke up.

It climbed out onto the edge of the Dumpster, a bit wobbly to be sure, but it made it all the way out, slid off the back, and trundled away into the woods. -- PL