I'm going to be delving into my old folders of stuff that I had collected and scanned for my old "Blast from the Past" section of the "Planet Racers" website. I only wish that I had been more organized with that project, i.e. putting things I'd already used into a folder labeled "Already Used". I remember most but not all of the things I used in BftP, leading to the slightly embarrassing duplication of a BftP entry about those Will Vinton Claymation Turtles in one of my early "palblog" posts. I will endeavor to avoid this in future posts.

Anyway, I found this odd piece in one of those BftP folders -- it's a fun little drawing of what you might call "Gizmo's Evil Twin". Gizmo, as all fans of cool non-oil drinking comic book robots know, is the creation of Michael Dooney. Together with his giant dog thing sidekick Fluffy, Gizmo traveled through space in his ship 'Soto, having wacky adventures. 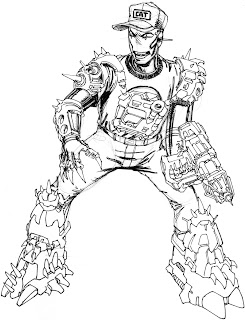 At some point, Mike and I obviously collaborated on this sketch, but for the life of me I can't recall how it came about. It's possible that we did it deliberately, or maybe Mike started a drawing of Gizmo, didn't like it, and was about to throw it away when I grabbed it and started playing around. I really don't know -- maybe MD himself will show up here and cast some light on the subject.

But I can see clearly Mike's style in the head and torso of the character, and my style in the various spiky accoutrements and the gun. I can't remember who decided to name the character "Omzig", but it was certainly the result of much careful thinking. -- PL
Posted by PL at 8:38 AM 8 comments:

The dudes (Mike Dooney, Eric Talbot, Jim Lawson and Steve Lavigne) came back a couple of days ago from the comic con in Toronto, and before heading back home to Maine, Steve stuck around for one more day so that he, Jim and I could go for that motorcycle ride we'd been talking about for some months. It was going to be a trip down memory lane, riding out to Sharon, CT, which was once the home of Mirage Studios (for about two years -- September 1984 to July 1986).

We were graced with an absolutely beautiful day to ride -- mostly sunny and slightly cool. The ride was great (except for that first blast down the Massachusetts Turnpike, which we only did to save some time), and we ended up riding about 185 miles altogether.

Sharon is nestled in the hills of the northwest corner of Connecticut, and it is a lovely area. I don't think I fully appreciated just how beautiful it was back when we lived there, but I certainly do now. Back then I think I was too busy with working on the comics to pay a lot of attention to the scenery.

We did a lot of reminiscing about life in Sharon, from Steve's job making sandwiches at the "Nutmeg Pantry" (a gas station/conveniece store -- actually, Sharon's ONLY gas station, I believe -- since renamed under a corporate title I can't recall at the moment); counting and packing TMNT comics in the basement of the little house my wife and I were renting; meeting Jim Lawson for the first time when he came with his portfolio to Steve and Kevin's apartment; driving fifty miles, round trip, to Torrington, the next sizable town over, to make photocopies (this was before we wised up and bought our own copier, which ended up in Steve's office/bedroom); and so on.

Here's a photo of Jim and Steve at the boat launch on the small lake I used to live next to in Sharon -- a body of water known as "Silver Lake" as well as "Mudge Pond", for some reason. 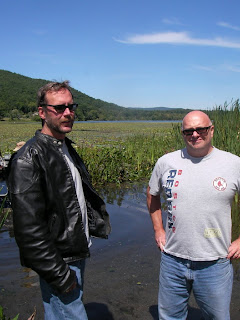 In the summer, we would blow up little rubber boats and paddle out from this point, looking for turtles and having squirt gun battles. And in the winter my wife and I would cross country ski across the frozen lake and in the surrounding hills. It was a great place to live (except for the rutted and bumpy quarter mile of dirt road we had to drive in on, which used to rattle and shake the cheapo cars we owned at the time).

From Sharon, we rode over the hills to Torrington, then north to Winsted, stopping at the Victory motorcycle dealer (Canton Cycles) there, and then took the scenic route past Barkhamstead Reservoir back to Northampton.

(I took advantage of a nearly-deserted stretch of divided highway north of Torrington to snap this photo of Steve riding alongside me on the Honda Valkyrie.)

I found this photo from a trip I took with Steve Lavigne and Dan Berger in 2003 out to the Berkshire Museum in Pittsfield, MA. The Berkshire is a small but very nifty museum with many interesting exhibits. Dan and Steve are posing with a cool live-size Stegosaurus model which stands in front of the museum. 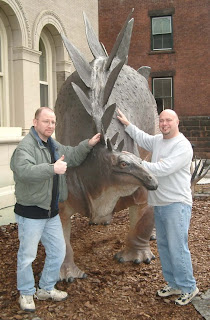 Quazine at the pool... table

Braving the dust collected under my pool table, I dug out one of the boxed Quazine figures I mentioned in my last post, and set it on the table to take a photo. 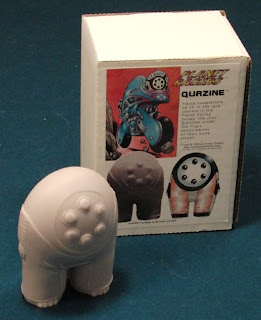 Given the interest several of you have expressed, I think I will be making some of these available -- maybe ten or twenty. But first I have to check with Katie to see how much they will cost to ship. They'll probably go for $10 plus shipping. I'll post more details here when I get it figured out.

As you can see, the Quazine figures are unpainted. I will be happy to sign any Quazines purchased -- I'd probably do it very small on the bottom of their feet unless otherwise requested. Probably Jim Lawson would be happy to sign them too. (Hmm... I just realized I should probably take a photo of the backside of the figure so you can see what that looks like. But I can't do it now -- I'd be late for today's movie meeting.) -- PL

UPDATE: I have decided to offer a limited number of the boxed, unpainted Quazines for sale through the TMNT website. They will go for $15.00, shipping included. I sent an email to Dan Berger this morning requesting that he post the appropriate ordering info, so hopefully that will show up on the site soon. -- PL
Posted by PL at 6:43 AM 32 comments:

Eric Talbot and his Quazine

I was looking around for something to use for a new blog post, and I decided to go delving into my folders of ancient digital photos. I found these in one section of the folder in which I keep all my photos that I took with my old Sony Mavica digital camera -- the one which (high tech at the time!) stored its images on floppy disks. 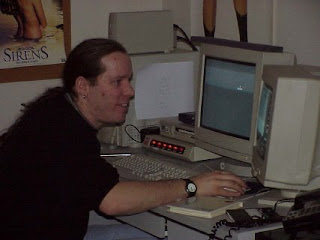 This first one shows Eric Talbot (when his hair was still long) working at one of Mirage's early Macintosh computers. I'm not sure exactly where in the studio this was taken -- it may have been in Eric's office. Check out the old CRT monitors and the Syquest drive (I'm glad we don't have to use THEM anymore). 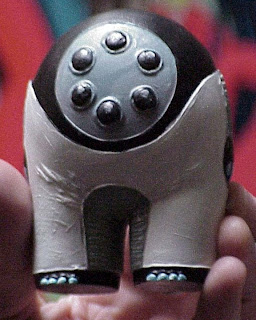 This second image is of a Quazine sculpture that Eric painted and which I think he had in his office. "What's a Quazine?", you ask? This was one of the cool aliens that the fertile mind and hand of Jim Lawson designed for our PLANET RACERS graphic novel trilogy. Mike Dooney sculpted one of these little guys (with his usual expertise) and gave it to me for my birthday. I was so taken by it that I asked him if he could cast it and make a bunch of duplicates, which he did. I think there were maybe fifty or one hundred of these things cast in hard grey resin. I gave some of them away, but the rest I was going to use as promotional items for PLANET RACERS. I think I may have sold a dozen or so at shows or signings we went to, but I got tired of bringing them around because they're kind of bulky in the boxes I put together for them. So the ones that are left are now gathering dust in bags under my pool table. -- PL
Posted by PL at 8:11 AM 15 comments:

Battle of the Thunder Lizards! 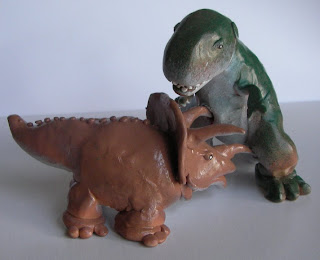 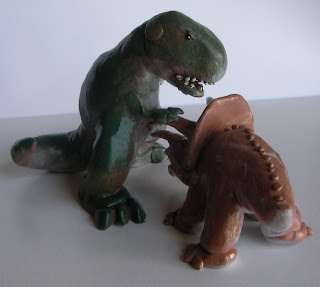 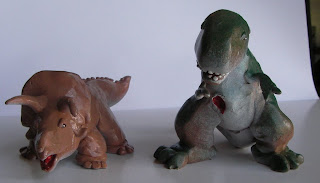 This is a cool set of two Sculpey dinos that Jim Lawson made for me AS a set -- it's a little "dino battle diorama", with my favorite dino (a Triceratops) going at it with the fearsome predator Tyrannosaurus Rex.

I like the way that Jim added the "battle damage" to the T-Rex where the Tric's horn jabbed him in the belly. (This is a scene I would have loved to have seen in one of the "Jurassic Park" movies.") -- PL
Posted by PL at 8:58 AM 9 comments: 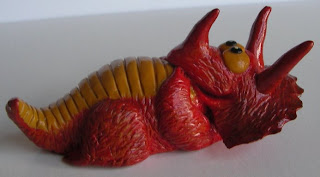 Here's another lovely sculpture from the talented hands of Ryan Brown. Ryan has the ability to make sculpts that look like toys. I love the paint job he did on this one, and the pose is great. -- PL 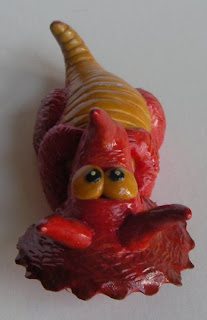 "Gone, gone the form of man
Rise the demon... Etrigan!"

Okay, that's the rest of the "summoning" rhyme (at least as I remember it -- the punctuation might be off) from the first issue of "The Demon" comic book by Jack Kirby. I wish I had three more Demon sculptures so I could have used one line from the rhyme as the title for each blog post, but alas -- I have only one more. 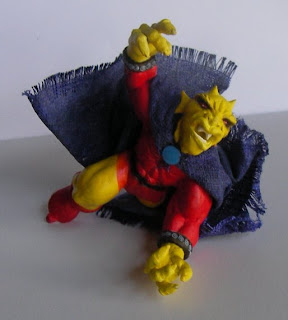 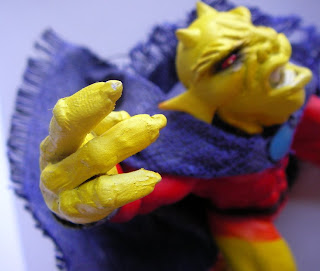 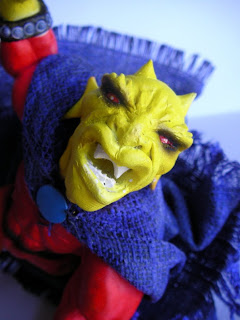 And this one is very nifty. It's also the only multimedia version, as the sculptor -- the "God of Sculpey" himself, Michael Dooney -- incorporated a fabric of some kind into the sculpture (for the Demon's cloak). 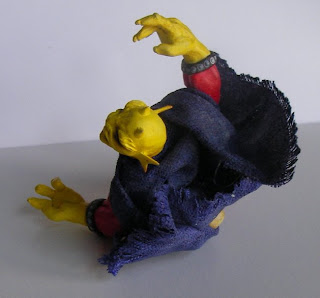 I especially like this view of the piece -- Mike perfectly captured the energy seen in many panels from the "Demon" comics in this pose. -- PL

P.P.S. As I was completing this blog entry, I remembered something I hadn't thought of in years -- my "Demon" sketchbook! I started this probably sometime around the first or second time I went to the San Diego Comicon -- it was a large, hardcover sketchbook in which various artists (not many, unfortunately) drew their versions of Etrigan for me. I should see if I can find that thing...

Here's a second sculpture of Jack Kirby's Etrigan, the Demon, from another of my Sculpey-slingin' pals. 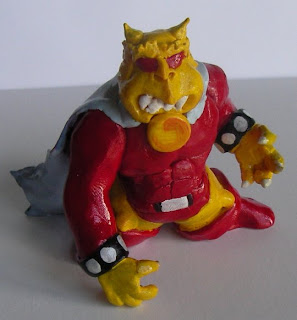 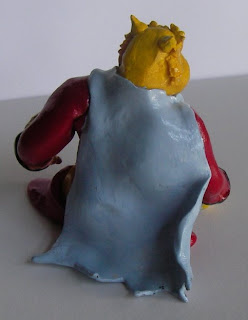 This time it's the talented hands of Steve Lavigne rendering Jason Blood's other self in three dimensions. Cool, huh? -- PL
Posted by PL at 7:30 AM 10 comments: