Yesterday, while out on a bicycle ride in Northampton, I stopped on the newly-installed bicycle bridge across Main Street to take a few photos I could stitch together into a small panorama.

I had to stick the lens of my camera through gaps in the cyclone fencing lining the sides of the bridge to get three clear shots, but I think it turned out nicely. The view is looking west up Main Street. -- PL
Posted by PL at 8:27 AM 8 comments:

Back in the late 1970's, while I still had my tiny used book and comic store in Northampton, I tried my hand at self-publishing minicomics. There was a copy shop right across the street, so it was convenient to bop over there and get the 8.5 by 11 inch copies made. They had a cutter which could slice big piles of these copies in half, so it made it easier for me to put together the 5.5 by 4.25 inch comics. I think I did about five issues of "Tenpenny Funnies" which -- coincidentally -- I sold for ten cents apiece. (I'm not going to say I sold very many of them -- in fact, I probably never recouped the printing costs.) It was a lot of fun. 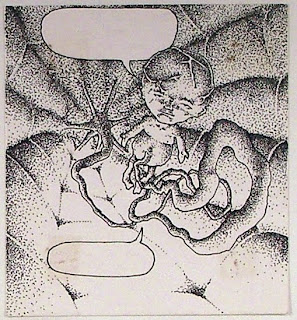 This artwork is a piece I did for the cover of the first issue of "Tenpenny Funnies". I can't remember exactly WHY I picked this image, but as for technique, I remember at the time being very impressed by Dave Sheridan's stipple work on various underground comics, including the work he did with Gilbert Shelton on "The Fabulous Furry Freak Brothers". -- PL
Posted by PL at 8:49 AM 3 comments:

Over the last few weeks, we've been seeing a lot of wonderful spring colors in the form of blossoming trees and bushes. Most of these I don't know the names of, except for forsythia. But they sure are pretty to look at.

I did a nice bicycle ride yesterday down the river path to Smith College, where I stopped to take a couple of photos of Paradise Pond and a beautiful flowering bush to later stitch into this little panorama.

And, having just recently discovered a very handy "macro" button on the side of the lens of my camera, I took this closeup shot of the blossoms. -- PL 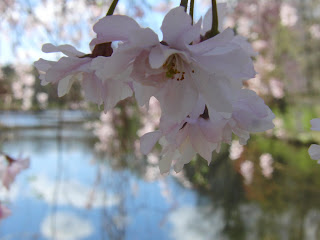 Blast from the Past #292: Hot air balloonists

I probably drew this one back in the early 1980's for "Hampshire Life", but -- from the "not used" note written on the side -- I guess it never saw print. I'm not sure why.

I find this piece interesting because it incorporates a technique I employed only a few times -- using a manipulated photo as a background for drawn art. I'm not sure where I first saw this technique -- probably in magazine or newspaper advertising, but possibly in those cool photo collages Jack Kirby used to do in some of the comics he drew in the late 1970's.

For this one, I used the trick of copying a photo, then copying the copy, then copying the copy of the copy, and so on. This had the effect of enhancing the contrast and removing most of the lighter grey values, until you arrived at a point where the image was almost completely black and white. And if it worked properly, you would end up with something that retained enough detail to be readable, while having the added benefit of not needing to be screened or halftoned.

These days, with the aid of computers, this is no longer a problem. Creating a printable halftone from a photograph is a snap, and if the higher contrast effect is desired, it's a lot more easily done with various controls in Photoshop. -- PL
Posted by PL at 7:20 AM 4 comments: 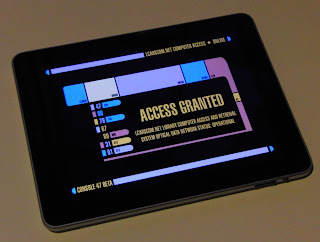 The above photo is of my iPad displaying one of a bunch of "Star Trek" graphics I found with a quick Google search. I hope someone writes an iPad app which will allow it to simulate an "LCARRS" display like this... could be a lot of fun! -- PL
Posted by PL at 4:41 PM 11 comments:

Fun with the helmet cam

Last week I finally got a piece of equipment I've been thinking about for a long time -- a helmet-mounted camera. I saw this particular model -- the "Contour HD" -- reviewed positively in a motorcycle magazine, and decided to try it out.

So far, I like it a lot. It's very small and light, and has simple-to-operate controls. And the quality of the video is excllent (although -- perhaps unavoidably -- the microphone in the camera picks up a lot of wind noise). You might not be able to see that from this example, as I had to reduce it in size and resolution to make it a feasible upload.

The video here is of a short ride on a local dirt road through some woods that I like to take occasionally, especially when I'm riding a more dirt-oriented bike than the street bikes I usually ride. In this case, that means my BMW 650. -- PL
Posted by PL at 7:45 PM 4 comments:

For the last five years or so, I've had a project which I've been promising myself I will do, and that is to scan all of the pre-digital camera photos that I have accumulated over the last three or four decades. I recently purchased a small photo scanner called the "Pandigital Photolink" and just started testing it out. It's very convenient and fast (I think it takes only about three seconds to scan one photo), but I'm not yet convinced it's the way to go. The quality is a bit shaky (of course, the quality of prints from some of those cheap film cameras back then is also pretty shaky), and the scanner has some annoying quirks, like not wanting to scan dark images (it tends to cut them off at weird spots). I'll have to do some comparison tests with a flatbed scanner to see if it makes sense to go that way, which would be a lot more complicated and work-intensive, but might give better results.

In any event, the reason I mention this is that in testing the little photo scanner last night, I grabbed a box of photos sitting next to my chair and pulled out a few to test with, and they brought back some nice memories.

Back in 1986, when we moved Mirage Studios from Sharon, CT up to Northampton, MA, my wife and I ended up living in a small apartment in Haydenville, a small town about seven miles outside of Northampton. I think we lived there for a couple of years before moving into the first house we bought in Leeds, MA.

It was while living there that Mike Dooney came for one of his visits (before moving here permanently a few years later), and here he is in my tiny studio in that Haydenville apartment. 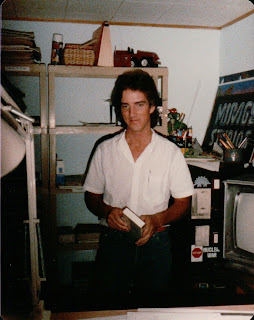 If I remember correctly, Mike split his time during that visit between my place and Kevin's, and I'm pretty sure while he stayed with me he was helping to ink zombies (among other things) in issue #8 of the original Volume 1 TMNT comics.

Sometime in early 1987, with snow still lingering on the sides of the roads, Jim Lawson showed up at our apartment, pleased as punch with his new motorcycle, a Honda 700 Nighthawk. 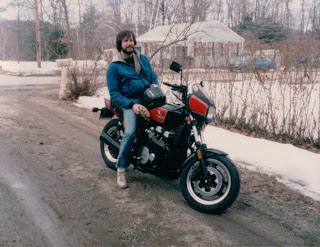 Jim offered me a chance to ride it, and it just so happened that although I hadn't ridden a motorcycle or had a motorcycle license in over a decade, I fell just within the Registry of Motor Vehicles' time rules in this sense -- I could go in and renew my motorcycle license simply by taking a written test. If I had waited another two months, I would have had to go through the whole road test thing again.

So when Jim came up with his new bike, I got to take a spin on it, just around the neighborhood. But it immediately awakened the love of motorcycles that had been slumbering inside me for a decade, and within a few weeks I had bought a new bike, a Kawasaki KLR650. And I never looked back. Thanks, Jim! -- PL
Posted by PL at 8:22 AM 7 comments: