Blast from the Past #219: Bruce Lee screen print

Here's another piece from the 1970's, when I was a little obsessed with Bruce Lee. I did this one at college, in one of my printmaking classes where we covered screen printing. 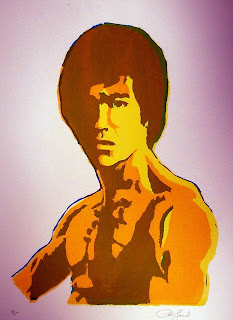 I never got very good at this technique, but I remember being fascinated with the process.

Note: The purple tones around the edges of the image were not in the original print -- they're just some weird artifact of the digital photography.-- PL
Posted by PL at 8:25 AM 8 comments:

I don't have any photographs or video to document this wet excursion, but yesterday I got caught in a fierce downpour while returning home on my motorcycle du jour (Honda DN-01).

I had gone down to the Mirage offices late in the morning to grab a bicycle and go for a ride. It was a hot, muggy day, and while the weather widget on my iPhone was predicting thunderstorms, there was not much in the way of heavy cloud cover to support that prediction. I finished my ride, ate a late lunch, took a little nap in my office, and around 5:30 decided to head home. It was already raining when I got outside, so I dragged out my rain gear and got suited up. In the few minutes that it took to do this, the rain increased greatly -- I hesitate to say exponentially, because I don't think that is literally true, but it sort of felt that way. Within minutes of taking off on the bike, I had to ride through the first of several semi-flooded areas, this one a dip in a road which went under a railroad bridge. The water there was pretty deep -- it came up over my footpegs -- and I had a few moments of trepidation, worrying that it might be deep enough to cause the bike to shut down. But the Honda plowed right through. It's always weird to produce a visible WAKE when riding a motorcycle on the street.

The next mile or so up King Street was somewhat nightmarish, as the traffic was fairly heavy and there were at least three long sections in which deep water had pooled. The storm -- which was still continuing -- had dumped enough water in such a short amount of time that the drainage systems had been temporarily overwhelmed, leaving standing water several inches deep all over the road, and giant puddles eight to ten inches deep in places. Under different circumstances (i.e. no other traffic, and on a different bike like my new dual-sport BMW 650), it might have been fun. But just then it was the classic "white knuckle" ride, made even more so by a number of clueless cage drivers who were acting like it was a normal day and not slowing down at all.

Fortunately, the bike performed admirably and made it through each flooded section, and although I did get wetter than I planned, I did make it home with no damage. -- PL
Posted by PL at 8:09 AM 9 comments:

Last night, just before bed, I decided it would be a good idea to have a cup of calming mint tea out on the front porch, and enjoy a little night air, the insect sounds, and some stargazing. There had been a bit of a rainfall a little while earlier -- not much, not even enough to hear it inside the house. But it was still enough to help to bring out the toads... or frogs... I'm not exactly sure which they are, though I think they are toads. They seem to appear under these circumstances.

I let the dogs out while I was sipping my tea, and they basically ignored the amphibians (except for one cursory glance/sniff by little Louis). I thought it might be fun to try to get a closeup shot of one of these nocturnal visitors, and, using the indirect light from my flashlight for illumination, I managed this one: 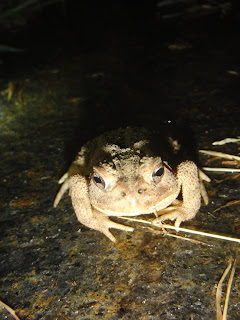 The beast was pretty amenable to getting its picture taken, not moving a muscle while I snapped this shot from about six inches away.

Blast from the past #215: Fathers and sons

I've always liked this drawing. It was done sometime in the early 1980's, and I believe Kevin and I may have printed it in one of the first "Gobbledygooks". The drawing was inspired by a photograph of family friend Len carrying his (then) young son Jesse on his shoulders. 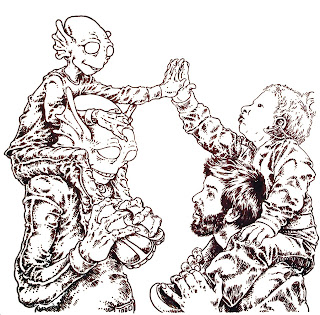 This is one of several drawings I inked with a "Flair" felt-tip pen -- never my favorite inking tool, but hey... they were cheap and convenient. -- PL
Posted by PL at 7:00 AM 5 comments:

Labels: Blast from the Past, Gobbledygook, ink

Blast from the Past #214: adaptive re-use

This drawing -- which I think dates from back in the early 1980's -- is an example of what I like to call "adaptive re-use". In this case, I had spent quite a bit of time drawing this corridor full of machinery, and I believe originally there was a robot peeking out of that doorway. I thought it might be handy to be able to re-use parts of this drawing, and so created an acetate overlay onto which I pasted the drawing of the barbarian with the sword (you can see that it doesn't line up precisely with the rest of the drawing -- when I took this photo, the acetate had shifted). 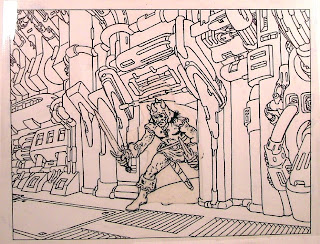 I think I did this a few times with various things I didn't want to re-draw, but it never became a real habit with me. -- PL
Posted by PL at 7:25 AM 2 comments:

Labels: Blast from the Past, drawing, re-use

Knowledgeable fans of TMNT history know about the significance to that history of the free "comics gazette" called "Scat". If Kevin Eastman had never seen that copy of "Scat" on the floor of the PVTA bus as he traveled from Northampton to Amherst back in 1980, he would never have seen my artwork in it, would not have looked me up through the Graphic Arts Guild in Northampton, we would never have met, and thus -- no Turtles.

I ran across these sketches recently, and they brought back memories. These are from the early days of Scat, when we were still trying to figure out what the logo should look like. I doodled these designs in my sketchbook...

We went back and forth on various logo designs, finally settling on this one, which I drew by hand:

It's been so long that I can't remember exactly, but I think this final design was based on an idea that either Marty Maceda or Brian Turner (two of the "Scat" co-founders) submitted. I also can't remember why I got the job of finishing it -- maybe just because I volunteered! We used this logo on the cover of the magazine.

I also did a slightly fancier, "rendered" version, as seen here:

We used this on various "Scat" business forms, like letterhead and invoices. -- PL
Posted by PL at 7:47 AM 12 comments:

Labels: Blast from the Past, logo, Scat

A while back I posted an image of a Triceratops with a pencil which I'd created to use in self-promotion. Well, I just ran across this preliminary sketch for it... 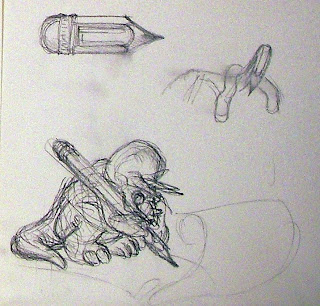 ... and I found it interesting to note the other designs I was toying with at the time. I think the one I ended up using was the best one. -- PL
Posted by PL at 7:42 AM 4 comments:

Western Massachusetts has seen an unusual amount of rain this summer, and a few days ago we had yet another big storm. I went out the next day for a bicycle ride, down Old Springfield Road, and ran into this: 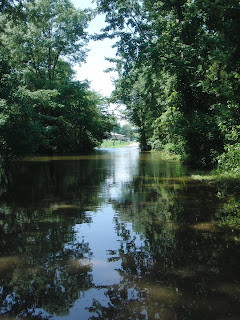 The Connecticut River, which you can't see in this photo but which is off to the left of this scene by a few dozen feet, had risen enough so that it flooded this portion of the normally dry road... resulting in this stretch of water I'd estimate as being about 150 feet long. I debated whether or not I should try to ride through it, but decided against it for a couple of reasons -- one, I was going for a motorcycle ride later and didn't want to get my shoes soaked, and two, I really didn't know how deep it was out in the middle of this thing. What you may not be able to see further ahead -- about two thirds of the way across this flooded area -- is a pretty strong current of water flowing from left to right. I was a bit concerned that I might get out there and end up soaking a lot more than my shoes. So I passed on this little adventure.

But it reminded me of a similar occurrence from a few years back, when I was riding one of my recumbent bicycles on this same road but on a stretch about another half mile on. The river had at that time risen and flooded parts of the road... but that day I was wearing my water sandals, and decided to go for it. I was also carrying my camera in my left hand (I do most of my shifting on the bicycle with my right) and took the following video of my journey across the waters. I can't say exactly how deep it was, but at one point you will hear me say something like "It feels nice on my feet" -- referring to the water, in which, at that point, while pedaling, my feet were submerged.

I've tried this kind of thing a few times, and it doesn't always work as well as it did here -- I remember one time I got halfway across and a floating stick jammed itself in my chain, derailing it and stranding me in the deepest part, from which I had to push the bike to dry land to fix the chain.