Jeannine Atkins' "Views from a Window Seat" -- now in print!

Almost since Jeannine and I got together thirty-plus years ago, I have been bugging her about self-publishing some of her wonderful writing work. I doubt that the following is solely the result of my pestering her over the years, but it probably had some kind of effect. (At least I would like to think so.) 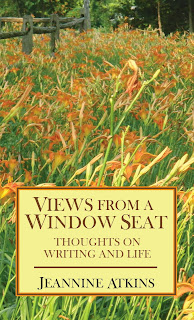 Jeannine just finished the final approval stages for her first self-published book, a collection of essays about writing and life from her blog, "Views From A Window Seat", aptly titled "Views from a Window Seat: Thoughts on Writing and Life" and it is now available through amazon.com. I'm proud to say that I helped her out a little with the  book design and layout, including her new "Stone Door Press" logo. (I wish I could take credit for the gorgeous photo of flowers she chose for the cover, but that's right from Jeannine's camera and her artist's eye.) -- PL

P.S. Here's a view of the back cover: 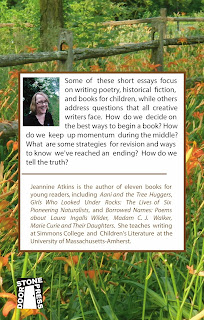 A review of ""These are the Voyages: TOS Season One" by Marc Cushman 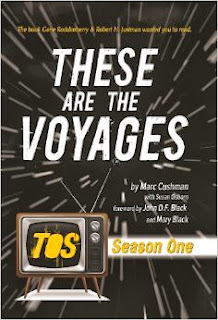 I just finished reading a very cool book, "These Are The Voyages" by Marc Cushman. It's a hefty tome -- 580 pages within its hard covers -- and is a fascinating look at the day-to-day creative process which went into making the first season of the original "Star Trek" TV series (also referred as "TOS", for "The Original Series"), using material culled from the extensive files of those who worked on the show, primarily series creator Gene Roddenberry and producer Robert H. Justman. Even if you are not a fan of that first "Star Trek" series, this book is worth reading for insights into how a television series of the 1960's was made. I suspect some of the same issues arise even now when TV series are being produced, more than four decades later -- the rewriting of scripts, the constant battles over budget, and the need to keep things workable on a practical level, to name but a few.

The book isn't lavishly illustrated, and there are no images in color, but there is an entertaining sprinkling of black and white photos throughout, many dealing with behind-the-scenes stuff, some of which I'd never seen before.

Unfortunately, this otherwise wonderful book is marred with what seemed to me to be an overabundance of typographical errors and odd misspellings. My guess would be that much, if not most, if not all of the proofreading was done with the spellcheck function on someone's computer -- leading to some goofy stuff like "breading" for "breeding" in the caption to a photo on page 62.

And there is a very odd line in the author's credit on the back cover, which reads:

"Gene Roddenberry took the pitch from Marc for "Sarek", the first episode of Star Trek: The Next Generation to include a character from TOS and thereby link the two series together."

According to Wikipedia, "Sarek" was the seventy-first episode of "Next Generation", and appeared in the third season of that series. But… a principal character from TOS had already appeared in "Next Generation", in the very FIRST episode of the first season, no less ("Encounter at Farpoint"): Dr. McCoy. DeForest Kelley appeared in this pilot episode as the aged Dr. McCoy, now an admiral, in a lovely, touching scene with the android character Data.

For a book as seemingly well-researched as this one, that seems like an egregious mistake.

However, it does not put me off recommending this book highly, especially for fans of TOS. And I will certainly be purchasing the promised following volumes, dealing with the second and third seasons of TOS, when they are released. -- PL

I was enjoying reading my new "Star Trek" book, "These Are The Voyages", on our front porch swing yesterday. The weather was mild, the late afternoon light was adequate, and I was ensconced in the swing in a posture which Jeannine often chuckles at when she sees me there -- it's not a large swing, probably about four feet wide, so I have to scrunch down a little and hang my legs off the end railing with my knees bent.

It was starting to get a little cool, so I shut my "Star Trek" book and untangled myself, preparing to head inside and maybe read a little more... when I glanced over at the small table next to the swing and saw this: 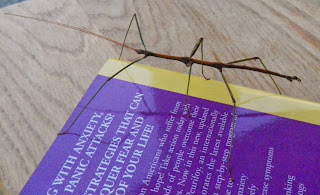 These insects are so weird and cool. They really do look like some kind of alien species. And I rarely get to see them, probably because they spend most of their time being very well-camouflaged on the branches of bushes and trees. 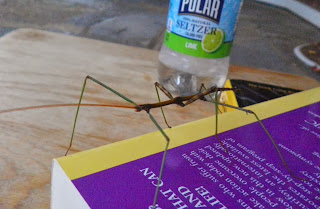 I don't know why this one in particular thought it would be a good idea to emerge from such a safe haven and crawl over next to me, but I'm glad it did. -- PL
Posted by PL at 8:54 AM 1 comment:

My brother Bruce, prolific painter/photographer/collagist, has two pieces in an upcoming show in East Norwich, Long Island. Here's the poster for the event: 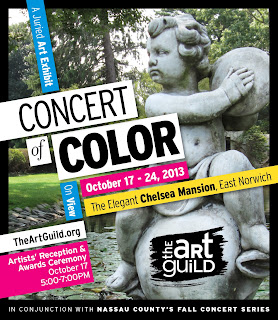 Apparently, the show is only a week long, so act quickly if you want to see it! The artists' reception is October 17. -- PL
Posted by PL at 9:26 AM 1 comment: