After enduring an unpleasant prep for a medical exam this morning, I decided to treat myself by driving out to the Norman Rockwell Museum in Stockbridge, MA. I'd read on the museum's website last week that there were two intriguing exhibits -- one about pop-up books, and the other a show of illustrations and portraits by the artist Everett Raymond Kinstler. It was a beautiful day, though not quite warm enough to take my motorcycle (I guess those eighty degree days we had a few weeks ago really WERE an anomaly).
The pop-up book thing was kind of a bust -- I was expecting something with in-depth looks at how pop-up books are made, why they appeal to us so much… but it was basically part of someone's collection of pop-up books.

It was fun to look at, but certainly not worth a fifty-five mile (one way) trip.
However, the Kinstler show was great -- lots of examples of his illustrations, both ink drawings and paintings, many of which were portraits -- and from what I could gather, all painted from life, not photographs. Here's a nice one of Katherine Hepburn: He's definitely one of those "old school guys" -- and at the age of 86, he's still going strong. I was wandering around looking at a lot of his beautiful work, when I realized that the crowd of people in one of the galleries were actually listening to Mr. Kinstler himself! I had not realized that he was supposed to be there today, so I decided to take advantage of this bit of serendipity and listen to the rest of his talk, which was very interesting and humorous.
My favorite part was when he described a meeting he had with Theodor Geisel (aka "Dr. Seuss") when Kinstler was painting this portrait of the famed children's book writer… It seems that somehow in their conversation, the topic of a children's book Kinstler had illustrated some years previous came up. It was titled "Cowboy Andy", and as Kinstler told the story, he confessed to Geisel that it was the worst illustration job he'd ever done… 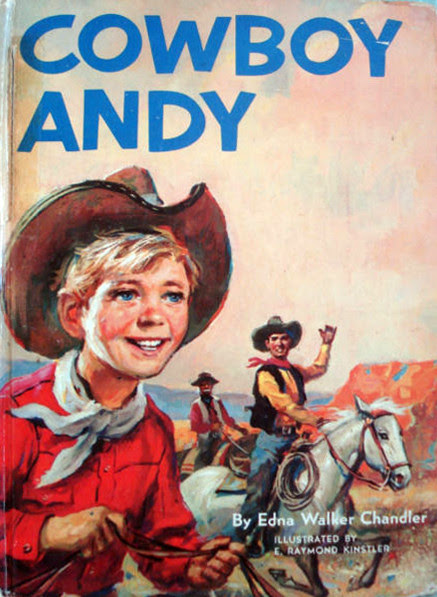 … to which Geisel replied "No, it's the worst illustration job ANYONE has ever done!" Apparently, Kinstler didn't disagree too much with Geisel on this point (or at least didn't take great umbrage at that description of his work on that book), as he told the story with a big grin.
After the talk, the crowd thinned out to the point where I was able to get a minute or two to talk with him, and I asked him what tools he had used to do this 2011 drawing (and other drawings of a similar style in the exhibit). 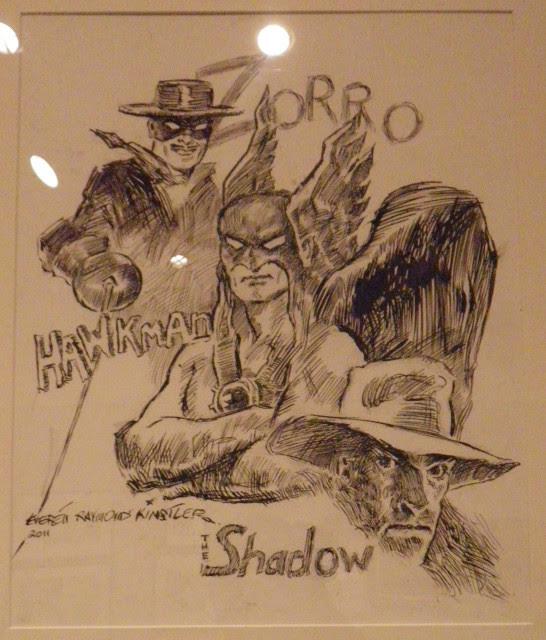 I thought for sure he would say a brush, but he told me that he actually did them with broad nibs for pens which were dipped in India ink. I was hoping to ask him if he'd known Jack Kirby during his years of working in comics, and what he thought of fellow illustrator Norman Rockwell, but other fans were itching to ask him some questions, so I didn't get that chance.
It was fascinating to study his artwork up close, especially the large black and white pen and ink drawings, to see how his loose, sweeping style was also so well-controlled as to produce some amazing shading and rendering effects. The guy can DRAW! Definitely worthy of being shown alongside Norman Rockwell.
Before I left the museum, I stopped in their gift shop and bought three things: a Norman Rockwell tie, a little bear which I am going to send to a bear-fancier friend of mine, and a beautiful autographed hardcover collection of a lot of Kinstler's illustration work titled "Everett Raymond Kinstler: The Artist's Journey Through Popular Culture 1942-1962". This is definitely a show which any appreciator of fine illustration should see. -- PL
Posted by PL at 6:26 PM 1 comment:

What a strange world we live in...

A few minutes ago, I happened upon this article:

(b) it is an early "April Fools" joke (April first being only a few days away.

Given how many thick-headed "journalists" read (and maybe "read" is too generous a word) my recent post about Michael Bay possibly turning the Turtles into aliens in the upcoming live-action movie and somehow got out of it that I supported this idea, clearly not perceiving the sarcasm in my words, I've been pondering the potential benefits of creating a "sarcasm symbol" -- a graphic icon which could be appended to a piece of writing or artwork to help the "perception-challenged" among us in apprehending the real meaning of said writing or artwork.

I started doodling in my sketchbook yesterday, and here's what I've got so far: 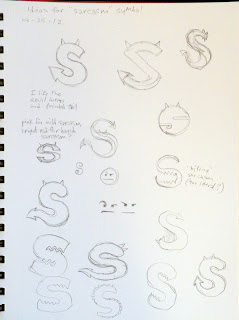 As noted, I like the "S" form with the devil horns and forked tail. I think I will keep working on this and try to get it into a nice, clean, black and white design.

A great deal on "Blue Plate Special" by MIchelle Kwasney! 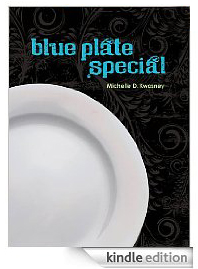 About a year ago, I wrote here about a new friend I'd made, a wonderful writer named Michelle Kwasney who was (and still is) battling the effects of Lyme Disease. I mentioned -- and put a link to -- one of her books, "Blue Plate Special", in that post.
Well, I just found out that amazon.com is offering "Blue Plate Special" as a "Kindle Pick", and the book is available for Kindle download at the "steal of a deal" price of $2.99. Here's the URL and link for the offer:
http://www.amazon.com/Blue-Plate-Special-ebook/dp/B005WUWGPA/ref=sr_1_1?s=digital-text&ie=UTF8&qid=1332274067&sr=1-1
Highly reccommended! -- PL
Posted by PL at 8:44 AM 1 comment:

Blast from the Past #497: "Copyrite" logo design

I can't remember exactly what this was all about, but I suspect it was something I did for a client of a small local design firm in Northampton, for whom I did some graphics and illustration work back in the late 1970's.

What I do remember about this one is having fun with it. I enjoy trying to develop logos, and this one in particular was fun because I liked using the three-dimensional pencil forms twisted in various ways to make the letters. -- PL
Posted by PL at 9:13 AM 5 comments:

Labels: Blast from the Past, illustration, logo

Sometimes, getting up from the kitchen table to make your wife one of her favorite treats -- in this case, a cup of cinnamon vanilla black tea topped with a mixture of milk and maple sugar frothed into foam with an Aerolatte® -- can bring extra benefits (beyond the gratitude of said wife).
I usually sit with my back to the window outside of which is Jeannine's bird feeder, so most of the activity out there goes unnoticed by me. But today, after I had prepared the beverage described above, and was handing it to Jeannine, I noticed a flash of muted red outside the window.
It was a female cardinal… and just as I was reaching for my camera, she flew away. But then an even brighter male cardinal flashed into view… and stayed long enough for me to snag a couple of halfway decent shots through the window. I like these little moments of serendipity. -- PL
Posted by PL at 9:19 AM 5 comments:

This is a view near our house from one week ago, the day that an early March storm dropped about six inches of snow on us.

It was heavy, sticky snow, good for decorating the trees and bushes, but a real chore to shovel. Even the snowblower was reluctant to deal with it.

Today, one week later, it is almost all gone.

This afternoon I bicycled with a friend on a bike path with just a few tiny, diminished scraps of ice in the shadowed spots. Small patches of snow like errant bits of rabbit belly fur dotted the sides of the path under bushes. We rode without jackets, without balaclavas or heavy boots, without thick gloves.
Crazy weather, but I'll take it.
For all I know, we'll have several snow storms yet. -- PL
Posted by PL at 4:31 PM 1 comment:

When we were starting to get our first serious snow of 2012 last week, I was out driving in it, practicing my snow driving skills. The snowfall wasn't quite as thick as I have seen it at various times in the past, but it was definitely coming down and decorating the landscape.
Coming home on a side road, I noticed the interesting pattern the falling snow had created on the branches of some large fir trees, and had to pull over to snap a few photos. The thought that popped into my head was that the limbs of these trees now resembled hundreds of white-gloved hands. Review of "A Perfect Red: Empire, Espionage, and the Quest for the Color of Desire" by Amy Butler Greenfield 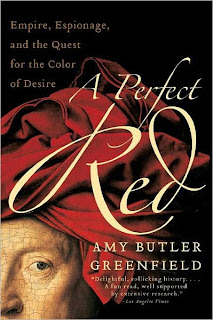 Some years ago, my wife and I visited a large antique store -- I think it was in Connecticut -- which was housed in an old buggy whip factory. I actually found a cool dinosaur toy made out of leather there, but I recall being more taken with the idea that this whole factory once made a product which today is virtually unnecessary. (I mean, I suppose there are a few people who still use horse-drawn carriages and need a buggy whip, but how many of those do you see on a daily basis?) It was a sobering reminder of how things change, often quite radically, over the years.
I thought of this a number of times while reading Amy Butler Greenfield's excellent book "A Perfect Red: Empire, Espionage, and the Quest for the Color of Desire". It is a book about the history and importance of the color red in human societies, but it mostly focuses on cochineal, a "dye stuff" from Mexico made from insects, which brought great wealth and power to Spain, and became the most sought-after ingredient in creating rich red fabrics, remaining so for centuries. Until the invention of cheaper artificial dyes in the mid-1800's, use of cochineal was the preferred way to achieve the best and longest-lasting shades of reds in the dying of fabrics.
Because cochineal was, for a very long time, only successfully produced in Mexico, which had been conquered by Spain, the Spanish had a monopoly on the dye, and made huge profits from the sales of it. Over the centuries, others tried (and failed) in various schemes to smuggle the cochineal insects out of Mexico and establish them elsewhere, a process which was very much like industrial espionage… only in that era, getting caught could mean execution.
It's a fascinating story, and the author tells it well, with prodigious amounts of research into the obscure history of a once hugely important ingredient of life in human societies. Along the way, the reader picks up wonderful bits of hidden knowledge, such as the fact that the word "ingrained" comes from the world of dyes and dying. The insights into the roles of various colors in fashion throughout the ages are also quite compelling.
"A Perfect Red" is an excellent book about a subject which deserves all of the attention Greenfield lavished on it. This is a great example of the type of book about history which I love to read these days, and which I think could make the learning of history in schools all the more effective and memorable. -- PL

"A Perfect Red" is available at amazon.com in paperback: