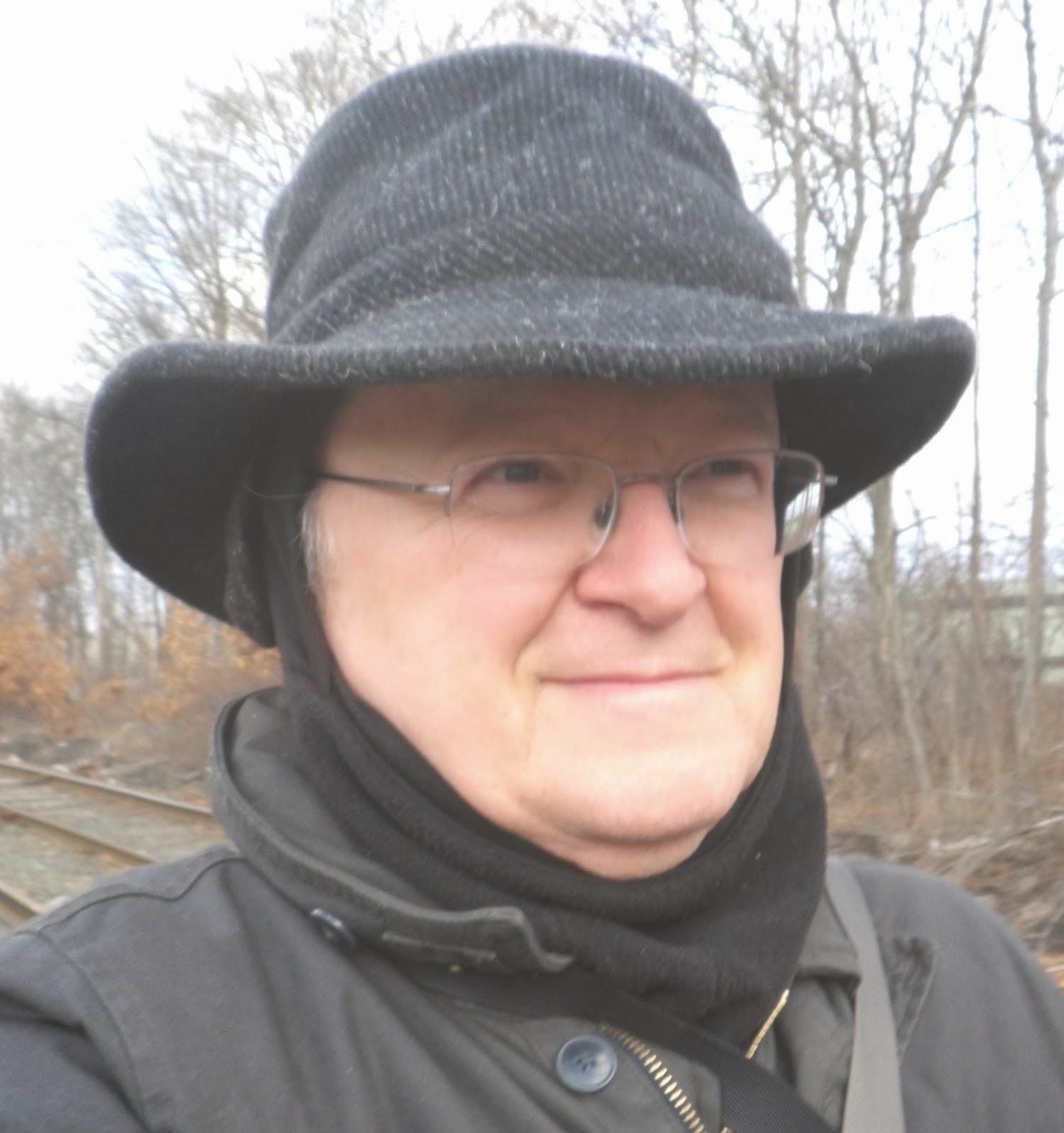 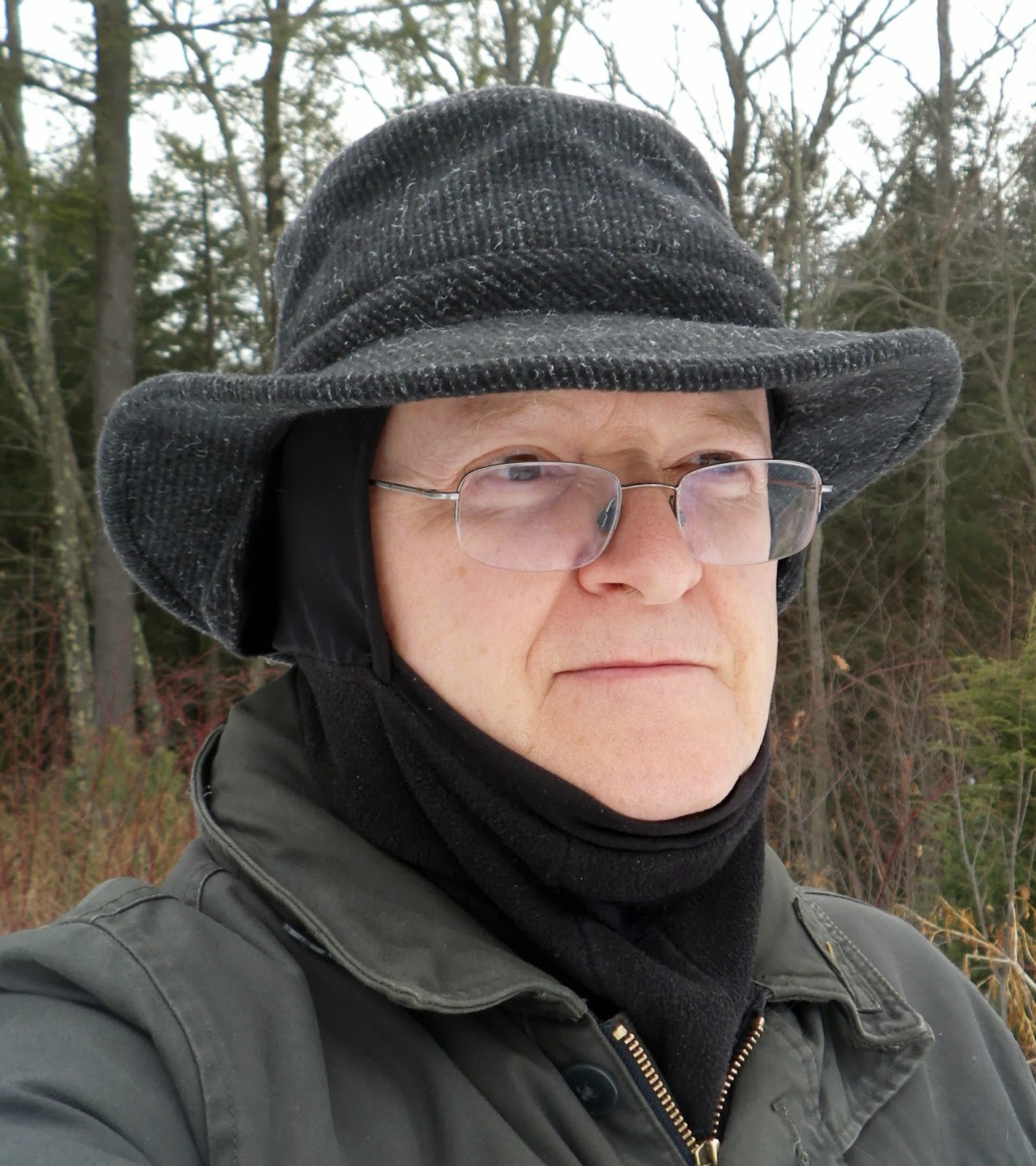 In the UMass greenhouse on a winter day

There's nothing quite like visiting a warm, steamy greenhouse on a cold winter day. You step through the door and it's like you have been instantly teleported to another latitude.

So it was for me when, while strolling around the University of Massachusetts campus, I happened across a greenhouse which was open to the public. My glasses immediately fogged up when I walked through the door, but once I wiped them off, I had a lovely time wandering through the place and looking at a wide variety of plants.

None of the photos I took of the various plants that caught my eye came out all that great, and I want to go back and shoot some better ones, perhaps with my Nikon. But I did manage to capture some images of the center of the greenhouse, which features a little pond with carp swimming in it, and a small bridge over the pond. I put them together into this vertical panorama. -- PL

These chirp instead of oink, but they certainly "pigged out" on winterberries.

A few days ago, Jeannine alerted me to a photo op -- a horde (well, a small horde… hordelet?) of hungry birds had descended on her winterberry bushes. It was pretty cold outside, and I'd only gotten up a few minutes prior and was not yet of a mind to face those frigid temperatures, so instead of going outside to take better shots, I stayed in the kitchen and took these through a window. 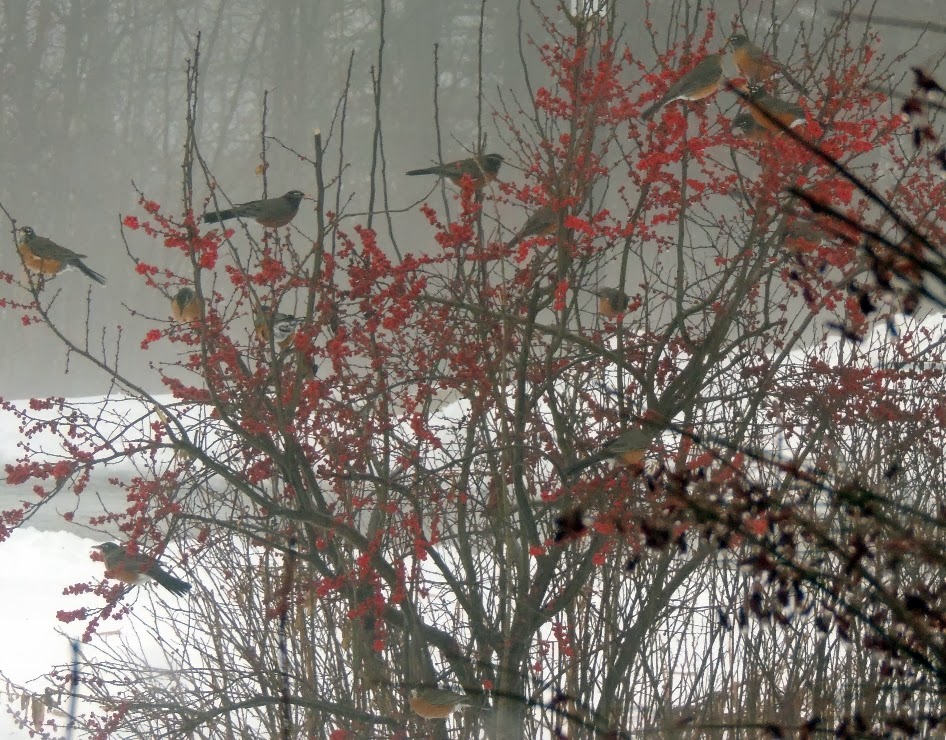 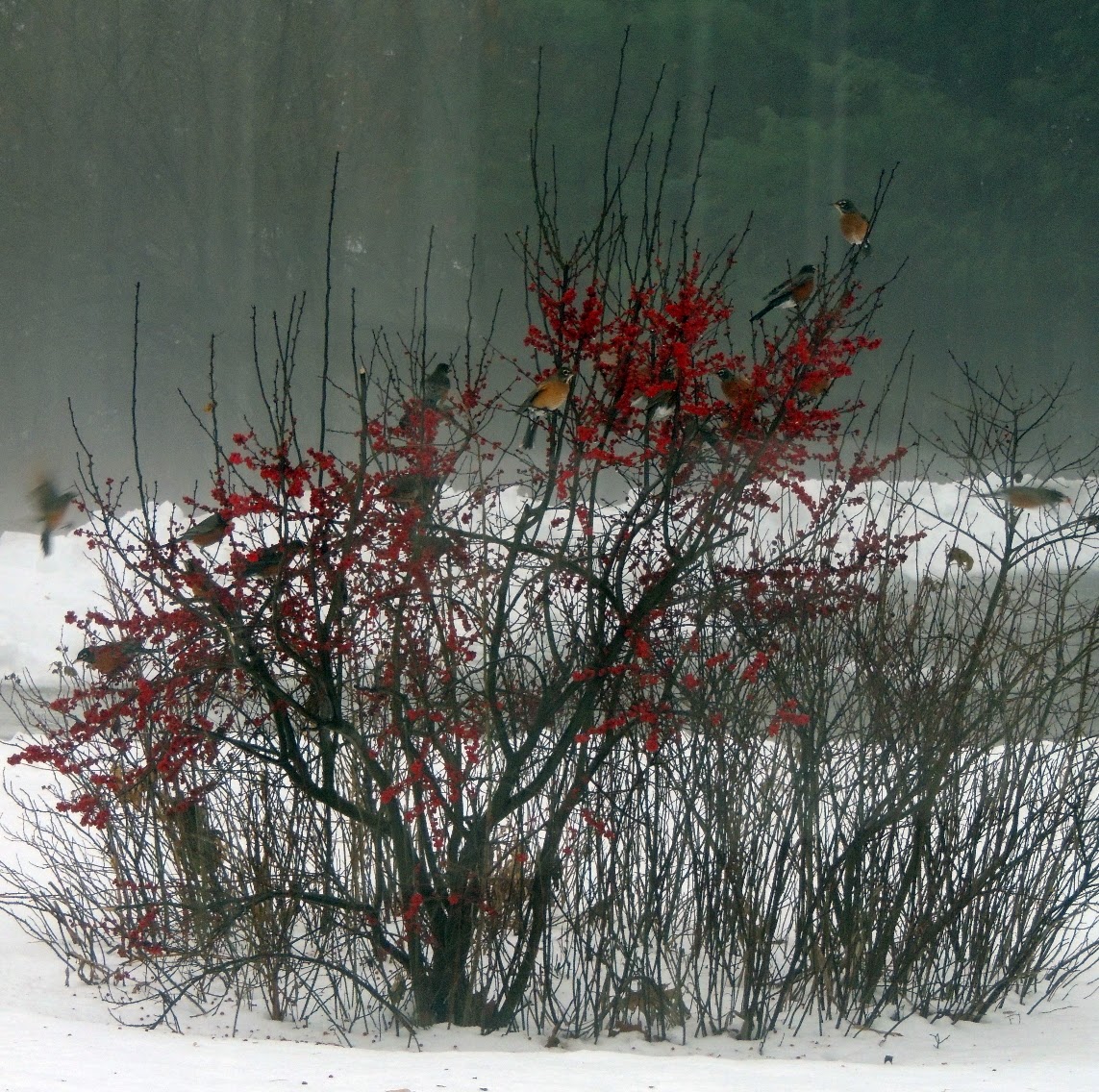 (And I also thought if I went outside for that better vantage, the birds might be startled and fly away, which would ruin the whole point of the exercise.) 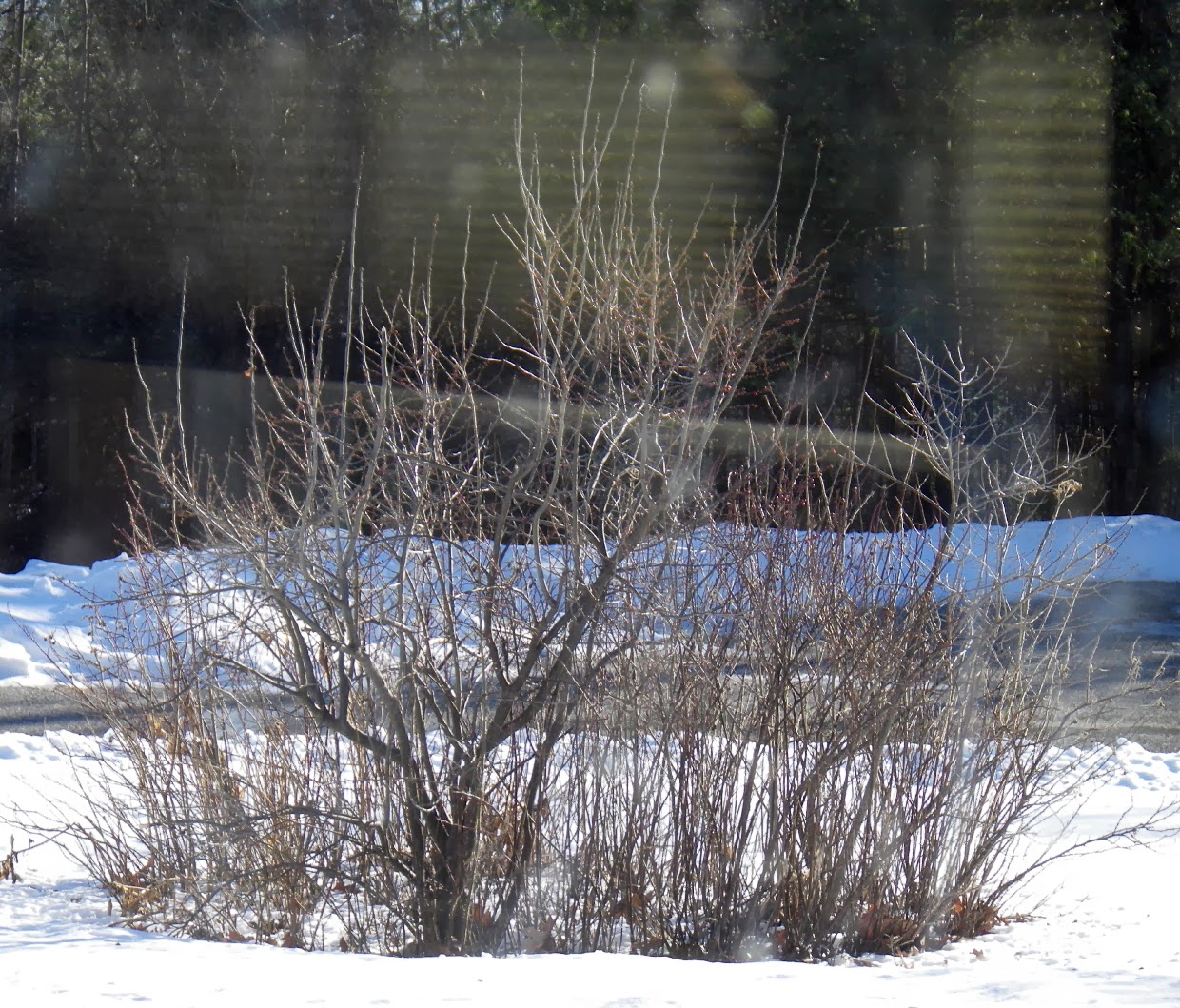 I didn't time it exactly, but I'd say it took them no more than an hour or two to strip the bushes completely clean of their red bounty, as you can see in the last image. -- PL
Posted by PL at 6:44 AM 1 comment:

Bird in the bush

While trying -- and failing miserably -- to capture a good image of a bright red cardinal yesterday, I noticed this plump creature momentarily perched on the tip of one of the branches of Jeannine's winterberry bushes. 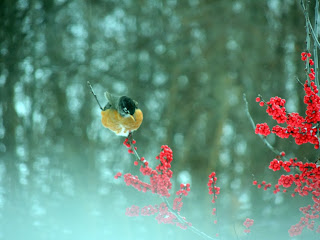 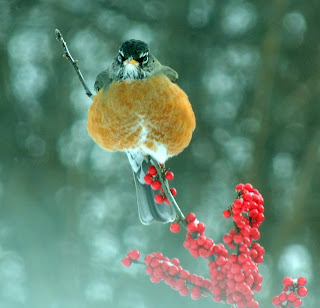 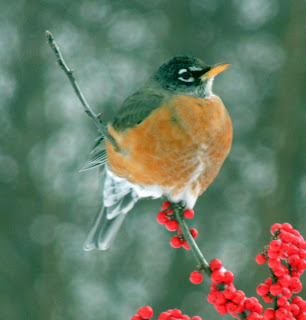 Thanks to the power of the zoom lens on my camera, I managed to get a few fairly decent shots of it through our kitchen window. -- PL
Posted by PL at 8:12 AM 8 comments:

Labels: Bird in the bush

Deconstruction of the 2013 Christmas tree 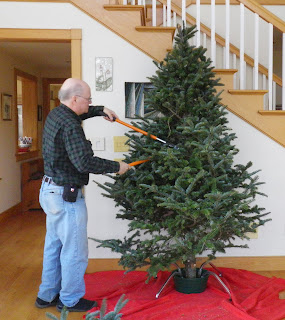 For about the last ten years or so, our tradition has been to leave the Christmas tree up until the first day of the following year, and then it gets "deconstructed". The ornaments are removed and packed away for next Christmas, as are the strings of lights.

Then I get out my loppers and go to town.

I started doing this years ago when I would get frustrated by the incredible mess I made trying to haul the entire tree -- by this time quite dried out -- through the hallway and out the front door. Hundreds, perhaps thousands, perhaps tens of thousands of dried pine needles would cascade to the floor, to be swept and/or vacuumed up later. There would always be some that we would not get, though, and some of those would invariably announce their presence via stabbing foot pains as they lodged themselves in the socks of the unwary shoeless walker.

I figured the fewer total needles falling to the floor, the fewer total little green daggers would afterwards lie in wait to stab our feet. I think the math works… sort of.

So I got a big pair of pruning shears -- what I referred to earlier as "loppers" -- and started cutting all of the branches off the tree before trying to move it outside. This allowed me to take small piles of branches at a time, and made for a much less chaotic transfer of the former Yule tree to the outdoors. I also was left with a naked tree trunk, and I have been storing these with the idea that someday I might make walking sticks or something out of them.

This year, I decided to set up my little Pentax camera to take a series of interval shots so that I could get a time-lapse movie of the process. I think it came out pretty well.


At the very least, it made Jeannine chuckle several times, which I thought was a good thing, as she always feels a little sad to see the tree come down. -- PL
Posted by PL at 10:50 AM 4 comments: