I've always loved blackberries. Sometimes, when I was younger, I would have the good fortune of finding some wild blackberry bushes in season, and I'd pick and eat the sun-warmed berries, reveling in their tart juice and delightful soft/crunchy texture. When Jeannine and I moved to our current location some twenty-odd years ago, I discovered -- while out riding my dirt bike on the local trails -- a large patch of said bushes, and it was a site I returned to several times.

But it's a lot easier buying them in supermarkets than picking them out in the wild while struggling to avoid being lacerated by the blackberry bushes' very sharp and multitudinous thorns, and over the last few years I have found that -- due to the wonders of world commerce and different growing seasons -- they can be found in our local grocery stores pretty much all the time.

And some of them are huge, significantly larger than the wild ones I have picked... like this one I got at the local Whole Foods last week. 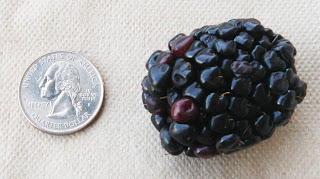 I had to put the quarter in the photo to show exactly how big this thing was. Unfortunately, the image doesn't really give a true indication of how juicy and tasty this berry and most of its fellows in the plastic package were.

… and the gradual shift to a different color palette…

… heralded by a sense that there is more yellow everywhere, even in the green…

… and the occasional single tree, impatient to be the first to burst out into party dress. 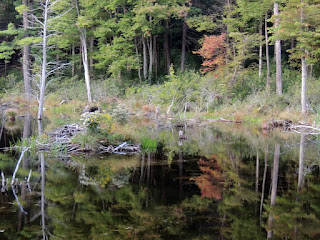