Blast from the Past #79 repost: Robot fighting arboreal beast

In much the same vein as BftP #46 ("Alien Snake Hunter") here’s another piece from 1983, the early days of Mirage Studios, pre-Turtles. This was also drawn and inked by me, then colored by Kevin in his inimitable fashion on a photocopy mounted on foam-core board. 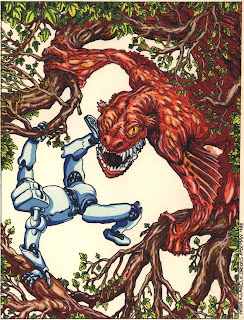 I can't recall what inspired me to draw this particular image, though I suspect my fondness for robots and monsters (and trees) had something to do with it. -- PL

P.S. I noticed one curious thing while resizing the image to put up on this blog -- the way we signed this particular piece. I used my middle initial (something I pretty much never do on artwork), while Kevin used his full middle name (but only an initial for his first name). I have no idea why we did this! -- PL
Posted by PL at 8:49 AM 2 comments:

Labels: Blast from the Past, color, Kevin

A few years ago, I used Photoshop to put together the elements of this image as a card for my daughter's sixteenth birthday. I used the "official" photo taken of her in the hospital a day or so after she was born, and added two of her (then, at sixteen) favorite things -- Red Bull and a cell phone. 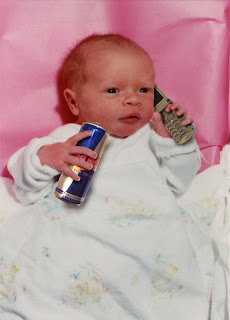 I don't think she drinks as much Red Bull any more, but the cell phone is definitely still a big deal (although she's gone through several since that one!).

We didn't get to see Em on her birthday this week (sob!), but she had fun taking her two roommates with her to Mardi Gras in New Orleans, to celebrate -- at least in part -- her fond farewell to her teenage years. Hard to believe my little girl is entering her third decade.

Just about a week after I took my first motorcycle ride of 2009, we had a snowstorm. And yesterday we had another one. WHEN WILL IT END???!!! Excuse me while I go wail and gnash my teeth in the outer darkness...

Here's a photo I took on my way home from Mirage yesterday. 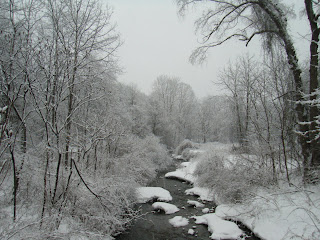 Even though the driving was bad, what with the snow, I wanted to get down to the studio to print out a "proofing" copy of the story guts of TMNT #30. I could probably have done it at home, but the duplexing capability of the color printer at Mirage make putting together a dummy copy a lot easier. Now I have to go through it and see how many mistakes I made.

Here's a little heads-up about what to expect in this issue -- there are only two scenes in it, only one involves a Turtle, and that Turtle is not Donatello, Leonardo, or Raphael.

I'm still looking for interesting letters to include in this issue. If you have any opinions about what was in the last issue, or other cogent TMNT-related comments, please send them along. -- PL
Posted by PL at 8:14 AM 11 comments:

Blast from the Past #155: Obi-Wan Kenobi with dead Stormtroopers on Tatooine

Here's another one of those "Star Wars"-inspired images I used to do for fun. This one is also from the early 1980's. -- PL 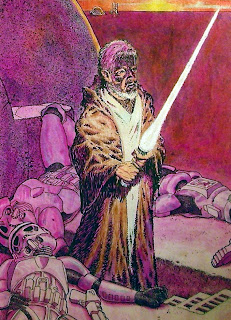 Labels: Blast from the Past, Obi-Wan Kenobi, Star Wars

Blast from the Past #76 repost: PL as Turtle, with pencil

I drew this self-portrait in 1985 (I still had hair on top of my head) as a spot illustration for an interview in some magazine... I think it might have been the now-defunct COMICS INTERVIEW. -- PL 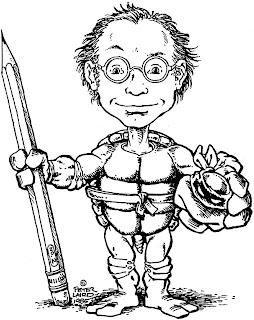 Labels: Blast from the Past, self portrait, TMNT

Blast from the Past #154: Han and Chewie fight stormtroopers

I did this one sometime in the early 1980's, I think. I'm not as big a "Star Wars" fan as I am a "Star Trek" fan, but I will freely admit that the first SW movie blew my mind. From time to time I found it fun to try to draw some of the characters, especially the stormtroopers -- I love the design of that costume. (Someday I'll have to post some shots of the one I built years ago (mostly) out of papier mâché.)

Labels: Blast from the Past, color, Star Wars

The first motorcycle ride of the year, regardless of how short it might be, is always a big deal for me. Even if it is cold and miserable, it signifies that the winter is coming to a close -- perhaps not right away, but the end IS in sight.

I did my first ride of the year yesterday -- just a short jaunt over to my parents' house to drop off some things. I wasn't sure if I could get a bike out of the big garage or up our driveway (still pretty icy), but I managed. I took out the Piaggio MP3, the 250cc three-wheeled scooter I blogged about last year. I figured the extra wheel in the front would give me a little bit more stability on the slippery stuff, and it did.

It's still too cold to do much riding, and the roads are still very sandy. But it's nice to get out again.

I was hoping to get a photo during yesterday's short ride, but didn't, as it was late, and getting darker and colder, and I wanted to reach home before the ice that had melted on our driveway froze again. So I looked back a few years to another "first ride", and found this image from 2006. That ride (on a 250cc Honda "Big Ruckus" scooter) was a month earlier than this year's, a much warmer day (in January!), and quite foggy. I recall that the fog made for some lovely vistas as I followed one of the back roads in Hatfield along the Connecticut River.

I like this photo for the somewhat ghostly vision of the tobacco barn in the distance. -- PL
Posted by PL at 10:04 AM 6 comments:

Blast from the Past #152: Gold Wing motocross

I found this piece the other day -- I think Jim Lawson drew it for me as a birthday present five or six years ago. Part of the reason I think this is that the Honda Gold Wing model depicted here is the older GL1500, which I owned before I upgraded to the GL1800. 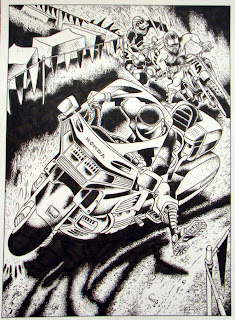 Labels: Blast from the Past, Gold Wing, Jim Lawson, motocross

I apologize for the poor quality of this mage -- I photographed it from a smallish reproduction in an advertisement printed on newsprint. I have not yet run across the original artwork, though it is possible it's in my files somewhere. 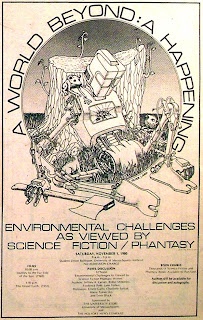 This is from one of two times that my artwork was used to promote a small science fiction event held in 1980 at the University of Massachusetts in Amherst, MA. At one of these shows, I got to meet Joan Vinge, one of my favorite science fiction authors.

In addition to being used in advertisements and posters for the event, this image was also printed on t-shirts. I think I may still have one of them (a little worse for the wear). -- PL
Posted by PL at 7:55 AM 2 comments:

Labels: A World Beyond, Blast from the Past, illustration

Blast from the Past #147: Triceraton archaeologist

This is a fun drawing from back in 1983, quite likely pre-TMNT. I think I may have done it as an entry in the "Fandom Directory" art contest, but I'm not sure. -- PL 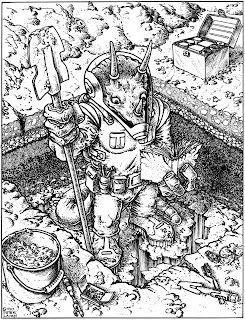 Labels: Blast from the Past, Fandom Directory, Triceraton

Blast from the Past #146: "They Came from the Fifties"

There is a small, independent movie theater in Northampton called the Pleasant Street Theater. They show many films that you might not be able to see at your local cineplex. Years ago (pre-Turtles), I designed several posters for this theater, and this one -- for a festival of science fiction movie from the 1950's -- was my favorite. It was a lot of fun to draw. -- PL 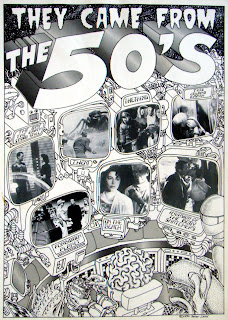 Update January 11, 2011: This is a minor thing, but in going through some old stuff I found this:

Apparently I was considering at least one different approach for the "three-dimensional" type in this poster, and ended up using only a part of this design.
It's funny -- this is the kind of thing that today anyone with passable skills in Illustrator and/or Photoshop could probably bang out in ten minutes. Back when I did this poster, those programs and their amazing tools didn't exist in anyones wildest dreams.
Well, certainly not in MY wildest dreams, anyway. -- PL
Posted by PL at 9:12 AM 4 comments: