When I got up today and checked my email, I found a "Google alert" about a TMNT-related story, and clicked on the link. It was mostly about Kevin Eastman and his history with the Turtles -- not a bad article, a little slapdash and loose with some of the facts, but containing a few charming details from Kevin about his childhood.

But the silliest -- okay, let's be honest -- the STUPIDEST thing about the piece could be found in the headline for it, as you can see by this screen grab I made. 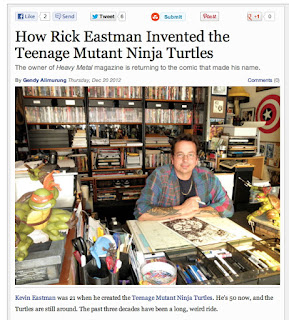 I've had enough experiences with journalists and editors to know that a lot of them are either (a) rushing to make deadlines and thus prone to making dopey errors, and/or (b) just freakin' lazy.

I mean, really, how do you justify a headline identifying the subject of the piece as "RICK Eastman" when the FIRST TWO WORDS OF THE PIECE correctly identify him as "KEVIN Eastman"?

Yes, it's finally here, and there is actually a little bit of snow coming down, so it's a "white Christmas", as well. Family and friends are due to arrive in about an hour and a half, and Jeannine and I are relaxing at the kitchen table with cups of tea, fruit salad and muffins made with butternut squash and cranberries.

So I thought this might be a good time to share this year's Christmas card -- our second collaboration. I came up with the idea for the design (probably inspired by the various "trees with faces" drawings I've done recently), and Jeannine wrote the poem.

Here's the front of the card... 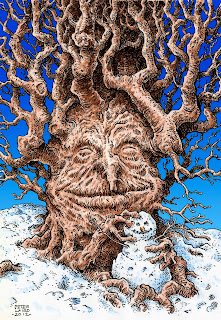 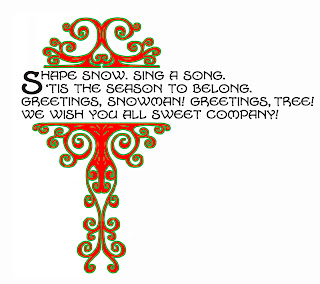 I'm not sure if it is due to global climate change or what -- we've had snowless Christmases before -- but pretty much every bit of snow which has fallen to date this season (and it has been pretty meager) has disappeared within a day or less.

So it was that yesterday, the day before the day before Christmas, I found myself taking a cold but pleasant bicycle ride on one of my favorite routes. A significant part of it follows a river path that ends at Paradise Pond, a lovely feature of the Smith College campus.

Stopping at the overlook above the pond to catch a view of the sunset, I observed something I am pretty sure I have never seen before. The setting sun was somehow casting a vertical shaft of red, poking up from the horizon like a flaming sword. I took several photos of it, though they don't completely capture the nature of this phenomenon.

Here's a zoomed-in view of the strange light… 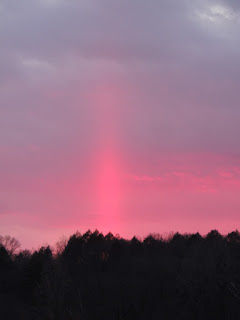 … and here's a panoramic view showing the setting.

I wonder what trick of physics created this intriguing light effect? -- PL
Posted by PL at 8:44 PM 1 comment:

Jeannine and I, along with Gary, Jim, Mike and Rob, went to see "The Hobbit" today, and I was planning to write about that for this blog entry. I probably will write something about "The Hobbit", maybe tomorrow… in the meantime, here's a short review: I enjoyed it.

But I feel compelled by enormous sadness and disgust to write about something else, and that is the shooting at the school in Connecticut today. I saw the initial report online before going to the movie, but at that point they didn't have news of whether there were fatalities.

About half an hour ago, I was driving down to the supermarket to pick up a few things for supper, with the radio on, and heard the updated news: Twenty-six people dead in that shooting… and twenty of them were kids.

Shot and killed, along with some of their teachers, in their grammar school.

What is it going to take to get some serious -- REALLY serious -- gun control in this country? Yes, I know it is very likely impossible to completely keep these kinds of things from happening… some number of those desperate/crazy/depressed/mean/stupid people who kill other people in this manner will find a way to get their hands on the kind of weapons -- in almost all such cases, guns -- which let these mass killings happen. Maybe serious gun control of the type I am thinking about would only keep guns out of the hands of a fraction of the total number of people who go off the deep end and commit crimes like this… but damn it, wouldn't THAT be worth it? To maybe save SOME significant number of innocent lives who might otherwise perish at the hands (or more accurately, trigger fingers) of these wretched souls?

Maybe this will be the tipping point. Maybe people will finally say "Enough!"

My cynical side says "Not likely." But my hopeful side sees the possibility.

I'm not a religious person, so it would be wrong of me to say I am praying for the victims of this horrific crime and their surviving family members and friends. But it is completely accurate to say that they have my most sincere and deep sympathy. -- PL
Posted by PL at 3:54 PM 3 comments:

I generally don't pay much attention to "Hello Kitty" merchandise, but this dual-point marker caught my eye as I was looking for other stuff at the local craft store.

I was intrigued by the shape of the smaller point -- from the package illustration, it looked like a long, thin chisel point, something I'd not seen in a marker before. So I bought it…

… and was very disappointed when I got it home, opened the package and saw the actual point.

As you can see here (even in these slightly blurry photos) the small point doesn't look ANYTHING like the illustration on the package.