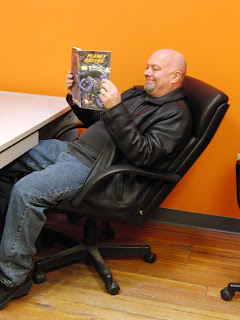 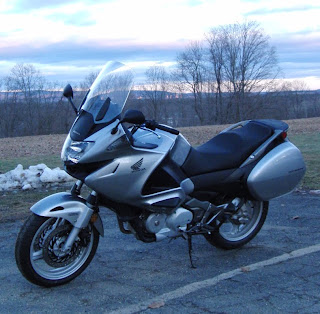 I would have ridden more, but I didn't want to risk hitting a patch of black ice in the dark. -- PL
Posted by PL at 2:50 PM

That wall is really quite orange. Don't you think?

Thanks for the behind the scenes info on the Mirage Dudes! Dan told me in an email right after the sale that Mirage was to close its doors on this past December 31st. Has that been changed?*crosses fingers*

Thanks Pete! I had a blast, and you are a true hero
I wish I was riding Jlo now! <( let the people wonder about this.) I should be typing this on my new laptop
but I'm using my crappy desktop. Thanks again Petey!

I really hope Mirage continues in some form; I always loved the anthologies and wished the Mirage Universe books had taken off. Since the Turtles aren't bogging down the creative aspect of other characters perhaps the Commandosaurs can finally get a full mission or maybe Gizmo Sprocket could make a long-overdue appearance.

Blah, I am happy to swap the seasons with you. It is still scorching hot in Australia and many of us are welcoming the Winter. And we don't even get snow *sigh* one of my 'things to do before I die' list items is to go to America in Winter and stay in one of those log cabins. Woo!
Anyway, love the bike! And the room. Nice and bright :D

-->> ..does this post stand as omen for a possible return of Planet Racers ??