A few weeks ago, Jeannine and I took a drive up to White River Junction, Vermont to visit the Center for Cartoon Studies (http://www.cartoonstudies.org/). James Sturm, author of several excellent graphic novels (including "Market Day" and "Satchel Page: Striking Out Jim Crow") created this school for comic book creators a few years ago and had invited us to come up and get a closer look at it.

It's quite an amazing place. Modest in size but bursting with ambition, it's the kind of school which I would have loved to attend in my younger days. We toured the main classroom building, which has a great basement studio filled with all the devices necessary to turn the art created by the students into actual printed books. And in another building, CCS has a wonderful reference library overflowing with just about every graphic novel and comics collection you could imagine.

But we started our tour with a short meeting in James' studio, and that's where the real subject of this blog entry begins. During our talk, James pulled out a large hardcover book featuring the work of a cartoonist I'd never heard of before, Denys Wortman, who'd produced many single-panel cartoons in the latter part of the first half of the twentieth century, mostly featuring urban settings and characters. The drawings were quite lovely, with a lot of painterly effects in the ink and crayon (Wortman did a lot of these drawings on coquille board). James also mentioned in passing that there was a connection between Wortman and the famous painter Thomas Hart Benton.

Fast-forward to the following week. Jeannine and I took a trip that I've been wanting to take for a while, since I'd found out that the New Britain Museum of American Art (in New Britain, CT -- website at http://www.nbmaa.org/), to which neither of us had ever been before, was having an extensive show of M.C.Escher prints and drawings.

So we drove down there, and decided to check out the entire museum (which didn't take too long -- it's not that big). I was surprised to see that one of the first galleries contained an exhibit of pulp magazine cover art, including a Virgil Finlay and a J. Allen St. John, among others. (I think this show is up through October of 2010.) We wandered around the galleries, admiring some wonderful landscapes by painters of the Hudson River School.

Then Jeannine stopped and nudged me. "I can't believe it!" she said. I looked at what she was looking at -- a painted portrait of Thomas Hart Benton by Denys Wortman! 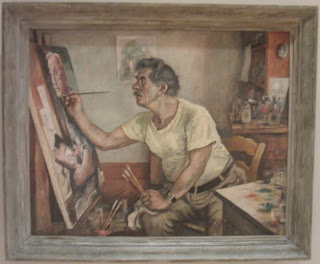 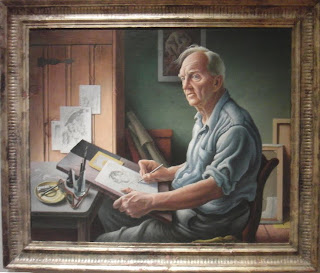 I mean, I'd never heard of this guy before we visited the Center for Cartoon Studies a few days earlier… and now this…!

Definitely one for the book of odd coincidences.

If you want to find out more about Denys Wortman, here's a nice site created by his son:

By the way, the Escher show was great, and anyone who admires Escher's work should go to see it. I'd never seen an original Escher print, just reproductions in books and on posters -- I think I had at least one in college -- and they were beautiful. There were also some of the original wood blocks he used to do the woodcuts -- or were they wood engravings? One thing I'd never seen anywhere before was the assortment of preliminary sketches in pencil which Escher used to work out his intricate, mathematically complex images. And there were two very cool three-dimensional pieces, one carved from wood and the other made of sheet tin, which were based on some of Escher's tesselated images. -- PL
Posted by PL at 6:41 AM

I had never heard of Wortman either, but the CCS had a exhibit of his work (I think it was him) when I was there a couple of years ago. Wonderful textured work, and his people are so beautifully ordinary.

Did you get a chance to eat at the Polka Dot Diner?

Pete, the other odd coincidence.... Look at what each artist is painting in theirr portraits!!! They did portraits of each other painting each other!!

"Did you get a chance to eat at the Polka Dot Diner?

Stan, the CCS folks DID take us to lunch at a nice place, and while I don't recall the name, Jeannine thinks it was indeed the Polka Dot DIner. In any event, the food was good! -- PL

" Scott Tofte said...
Pete, the other odd coincidence.... Look at what each artist is painting in theirr portraits!!! They did portraits of each other painting each other!!"

That is pretty cool. I just realized that I should have made this point clear in my blog entry -- the two artists were good friends, and on a simultaneous visit to Martha's Vineyard one year, they agreed to paint each other's portrait. -- PL