I had the pleasure of a visit from Steve Lavigne today -- he'd come down from Maine to the Northampton area to see his old Mirage pals, and he and I got to do a nice bicycle ride together and catch up on stuff. Steve has been working on various art projects, and one of them involves illustrating children's books, two of which he has completed. He has also produced some very cute plush toys to go with the books, toys based on a couple of the characters in them. When Jeannine and I were in Maine last month, Steve gave me some samples of them, and I took the opportunity of being near the ocean to get these shots of the plush figures -- Twinkle Star the starfish and Squiggles the snail -- with a realistic environment suitable for their aquatic nature. 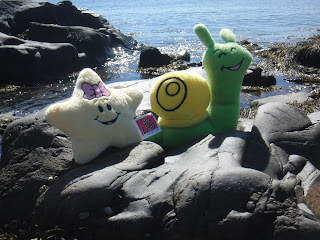 Steve is hoping to get his website (which I think he said should be stevelavignestudios.com)up and running soon, and he'll be able to post more information about what he's up to when that happens. In the meantime, I can tell you that he will be attending a crafts fair in Newburyport, MA, on October 10 and 11, where he will be selling both children's books he has illustrated, as well as the plush toys shown above, and some t-shirts. (And you might be able to get him to do a quick TMNT head sketch if you ask nicely.)

I asked Steve to say a few words about the books, and this is what he sent me: 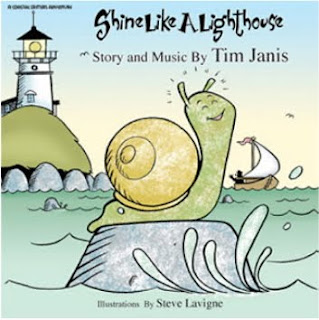 "Shine Like a Lighthouse" is the story of little coastal critters that live in the shadow of Nubble Lighthouse in Cape Neddick, ME. We meet Squiggles the snail, Twinkle star and their friends as they play games and become great friends. And when a boats captain gets turned in the wrong direction the friends band together to help. In the second book, "Twinkle Star's Adventure" we join Squiggles and Twinkle Star and the rest of the coastal critters playing in the summer evening. When a shooting star skates by in the night sky Twinkle Star wonders if the shooting star could be a new friend? So Twinkle Star, Squiggles and Big Belly cod go on a great adventure to find the star, and along the way they meet some new friends.

I produced the plush toys because when I started selling the first book a lot of the comments I was hearing were about how cute Squiggles and Twinkle Star are. So I thought that it would be great for little kids to hold on to them when someone reads the book to them."
Posted by PL at 6:34 PM

Thats cool seeing the diverse projects of the Mirage dudes and yourself from your Ninja Turtles work. Dan Berger told me he was planning on doing childrens books. I hope he and Steve could collaborate. The draw back here is I'm a little young for a family of my own and can't patronize their work yet.


Thanks for showing us what Steve is up to and great to know your still in touch.