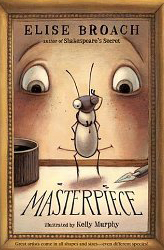 On the strength of a recommendation in a comment (thanks, Amy!) on my wife's blog post about the Albrecht Dürer show we went to in Williamstown, MA, I recently bought "Masterpiece", a novel for children by Elise Broach. It is basically a story about a beetle named Marvin who discovers he has a talent for drawing -- a talent so profound that one of his drawings (a copy of a miniature Dürer drawing)  is used in a scheme to catch the thief who has stolen several other original Dürer drawings.
But it's more than that. It is also -- perhaps mostly -- a story about friendship. In this case, it is a most unusual friendship, one between a young boy and a young beetle. And I have to give the author a lot of credit for accomplishing one of the most difficult of tasks in this kind of story, and accomplishing it with seeming ease and seamlessness: the suspension of disbelief. Broach anthropomorphizes the beetle Marvin and his extended family -- they speak in English with each other (and understand the speech of humans, even though they cannot speak to humans), go on picnics, play games, and so forth -- but she does it in a very interesting way, coming right up to the line where you might expect that Marvin and his human friend James will start talking to each other like characters in a Disney cartoon (think Pinocchio and Jiminy Cricket, for one example)… but not crossing that line. Instead, she uses clever body language and an internal monologue (both on Marvin's part) to establish the method of communication between boy and beetle.
I don't, in general, read books written for this age group, but Broach's writing style and ability to imbue insects (and people) with interesting personalities drew me right in. Marvin and his family are the kind of people -- uh, I mean beetles -- that anyone would like to spend some time with. And Broach makes the occasional wry aside (I liked the one about lawyers in the beetle world especially) which adds to the appeal of the story for adults.
But I think the thing that I found most charming and evocative was the scene in which Marvin first discovers his talent for drawing, when he dips his two forelegs into the ink left in the cap of James' bottle of ink, and starts to use his claws like pen nibs to render an exquisite drawing of the scene outside of James' bedroom window. There is something about this that really appealed to me -- I think it was in part that Broach didn't have Marvin trying to use the pen or any other human drawing implement, but instead did what seemed completely -- well, natural. It made total sense that this is the way a beetle might draw with ink.
To avoid giving away too much, I won't get into the mystery part of the plot -- suffice it to say that it involves a museum, an original Dürer drawing, and a plan to catch the thief who has stolen several other Dürer drawings. It is all well-written -- but I have to say that the resolution of the mystery is perhaps the weakest part of the whole book, and actually -- at least for me -- required more suspension of disbelief than accepting a beetle who draws in ink really well with his feet. But, even so, it doesn't ruin the story.
(I must also mention one sequence involving Marvin and his cousin Elaine and their adventure with a hungry turtle in a terrarium -- it's well-done and exciting, but left me wondering why it was in the book. It had the feel of something added later, perhaps at the urging of an editor who wanted more action in the story. It's one of those things which could be excised entirely and never be missed. I will say, too, that it was in this sequence that the pretty realistic world Broach had created for her beetle protagonists started to slip a bit, with a bit too much "Indiana Jones"-style derring-do on the part of Marvin and his cousin. And can beetles REALLY walk up the sheer glass side of a terrarium?)
The accompanying black and white spot illustrations by Kelly Murphy are amusing and charming, and perfectly complement the text. There is also a very interesting question-and-answer section with both author and illustrator in the back of the book. I would have no problem recommending this novel, especially for its target age group. And I think I will be reading more by Elise Broach. -- PL
Posted by PL at 7:03 AM

Amy, I think it was probably the moment when the book really sold me on the whole world that Elise Broach had created. It was such a perfect action, and so "natural", if I can call it that. She didn't have Marvin pick up a twig or a cat hair or anything like that to dip in the ink and try to draw with, which I thought was a very smart move. And there is a nice connection in Marvin's action to how kids begin to create art, when they smear paint around with their fingers.
I've just ordered Broach's "Shakespeare's Secret" from amazon.com, and am looking forward to reading it. -- PL

Love love love... that you've taken the time to review a children's book. Writing for children is one of the most challenging, and rewarding, venues for a writer. It requires suspending adulthood... looking back into childhood with the eyes of a child and seeing the world as they do, while maintaining the adult perspective that allows for the ebb and flow of language.

Congrats on discovering such a treasure. And now, thanks to your review, I'll be looking that one up myself. :)

Rejoicing in the day
-Mary