I just remembered one of the many nice details which Joss Whedon and his crew put into the "Avengers" movie -- a brief bit where Tony Stark answers his phone and pretends to by his own "Life Model Decoy".

It's a very small thing which will almost certainly go zooming right over the heads of most viewers on the movie… at least, the ones who are not acquainted with the minutia of Marvel Comics lore.

"LIfe Model Decoys", or LMDs, were android duplicate of human beings, used for various purposes, including misleading assassins, as is seen in these first few pages of this installment of "Nick Fury, Agent of S.H.I.E.L.D." from the old "Strange Tales" comic published by Marvel. This was in issue #135, in a story penciled by Jack Kirby and written by Stan Lee. (If I had to guess, I would say that the idea for the LMD technology came from Kirby's imagination.) 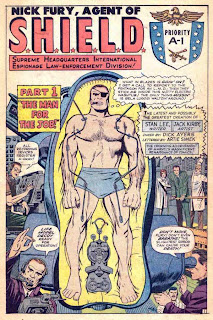 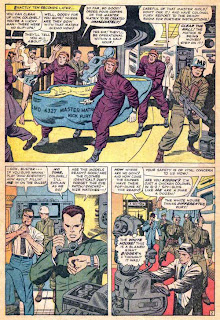 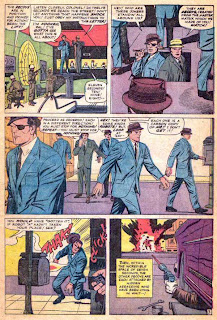 I remember that first page so clearly, as it was such a strange image… partly due to  the fact that Kirby drew Nick Fury in this high-tech "Master Matrix" LMD mold with his trademark cigar still in his mouth! -- PL