Blast from the Past #100: "Melting Pot" and "Commandosaurs" pencils for ad

This is kind of an odd piece. I believe it is the only time I ever drew a character from Kevin Eastman and Eric Talbot's "Melting Pot", in this case the toothy individual in the foreground whose name was "Grinner", as I recall. 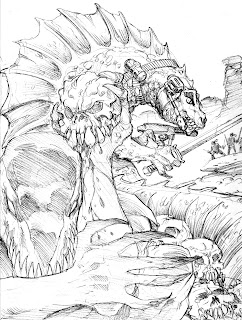 The dinosaur with the sword and gun is Fett, one of the "Commandosaurs" from the never-completed comic book series that Steve Bissette and I worked on in the early 1990's (based on a concept that I had come up with on a flight back home from a visit to Playmates Toys in California). And if you look closely, you can see the silhouetted figures of the Turtles in the background.

I'm pretty sure this piece was meant to be used in an advertisement for upcoming Mirage Studios publications, and I have a vague memory of Kevin inking it. I can't remember right now if it ever saw print. -- PL
Posted by PL at 8:01 AM

It's beautiful as always and why exactly was Commandosaurs never-completed?
It looked to be a very promissing idea.
Do you think it's something you would like to one day get to?
-Vaughn M.

Is it possible for the Commandosaurs to appear in the TMNT universe?

Commandosaurs should fit right into Turtles.. no big thing ..maybe they cam show up on B T T S . NO ??

I think this was in some way used for the last Fantacon.

It's beautiful as always and why exactly was Commandosaurs never-completed?
It looked to be a very promising idea.
Do you think it's something you would like to one day get to?"

It was one of those things where at the beginning, the energy and excitement were high and big plans were made, but then as time went on the energy started to dissipate and the project fell apart. I am disappointed that Steve Bissette and I were never able to do the mini-series that we had planned for "Commandosaurs" -- it could have been very cool.

It's something I would like to get back to at some point, but when that might be, I couldn't say. -- PL

I've got to get off my butt and do the lettering (and finish the toning on the last ten or so pages). It's possible that I will get to that in the next couple of months. -- PL

Is it possible for the Commandosaurs to appear in the TMNT universe?"

It's possible, though at this point probably unlikely. I think I want to keep them separate, and we also have enough humanoid dinosaurs in the TMNT universe as it is. -- PL

Well Pete,
I'll be there for when you do decide to do it, and I really hope you do.
Perhaps it would do you a bit of good to deal with something outside of TMNT even for a short while. :)
-Vaughn M.