Blast from the Past #4 repost: "Alien Gardener"

Most people don't know this, but the first TMNT movie originally had a different ending. As scripted, it went something like this: Shortly after the big battle with the Foot and the defeat of the Shredder, the now unemployed April decided to take the concept of a comic book based on the adventures of the turtles to a publisher to see if they would publish it. In a scene set in the publisher's office, April and Danny Pennington (her old boss' son) were shown waiting anxiously as the publisher dude perused her sketches and proposal... which he then handed back to her, saying something like "This is too weird... nobody will buy this comic!" Whereupon the Turtles -- who had been clinging to the wall outside the office window -- react with various expressions of comic dismay, and I think Mike actually falls off the building.

Anyway, this scene was actually filmed. The movie people asked us at Mirage Studios if we could quickly come up with some wild art to decorate the walls of this comic publisher's office, art that would represent characters and comics published by this company. We all got into it, and turned out about half a dozen pieces... including this one. 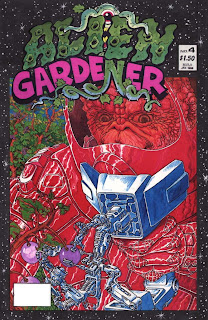 It was a piece of art I had lying around, just something I did for fun. Ryan Brown designed the wonderful "Alien Gardener" logo and I pasted it all together as a mock-up comic cover.

If New Line Cinema ever gets around to releasing a "special edition" DVD of the first TMNT movie, it would be cool to have this scene and several others that I'm aware of included as "deleted scenes". Hey, you never know...! -- PL

UPDATE 09-15-08: I found the original black and white drawing for "Alien Gardener", and thought you might like to see it. -- PL 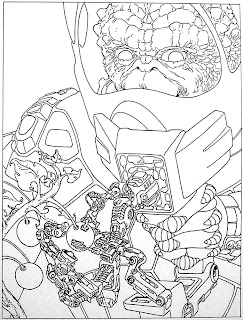 -->> .. o christ, i think this type of stuff just defines allot of TMNT and Mirage stuff in general.. just damm cool and damm weird !! I do believe allot of that weirdness persists in the comics even to this day. But i guess that goes without sayin'.


.. so basically you guys have still have heard from Warner about the DVD then.

You just made the day of many fans out there, do you realize?

I'll have to avoid them like the plague-- else I'll be squeeging the floor.

This is exactly why everyone including the big guys should be pushing for a special edition dvd of the first movie and heck even the others, I've yet to buy the old TMNT movies because I refuse to until they get the treatment they deserve.
Btw that art is creepy and I love it heh.

This ending however DID make the official adaptation comic of the movie. I always wondered why it was there when not in the film. Guess I know why now!

Which is funny, because if it where restored, would it not open up a bit plot whole?

As a kid, I always thought the reason April had a different boss in the second one, was because she got promoted, not fired :).

Pete, in this case, this is something I think that Mirage needs to get tougher on, since WB, or whoever owns New Line Cinema now, obviously has no interest in doing this on their own...which is a shame. They've had numerous times to do it before and the new movie release would have been perfect too..

Considering that next year is the 25th, I would love it if fans could vote on the 'Impossible Wishes' that they would love to have happen in the Turtles franchise.

Obviously up on top is as Follows:
Pete drawing and writing a Volume 4 Issue

Special Edition of movie one at least. Commentary with the original voice actors in character as the turtles, as if the turtles themselves filmed the movie and not actors, making it interesting for all ages to listen to.

And of course, my biggest wish:
Rob Paulson, James Avery Pat Fraley and Peter Reneday recording episodes of the original show that they missed. Lions Gate as stated on Murphs blog was looking for some 'themed set' releases for the 25th, and believe me this would be a PERFECT fit. Even the casual fans I know hate the alternate voices and would not buy those sets at all...

I know I'm getting way off topic, but I do that sometime. Thanks for listening to my ramblings

Wow!
That would be awesome!
I would love to see that scene in all its glory!

Ryan did an awesome job on this, as well as Peter!

I love the fact that it was filmed. I've been wanting to see it for quite sometime (since reading the comic adaption I believe.) That's one scene I would love to see in addition to TMNT 3 where mikey has his bandana off. (He looks a little too much like Kermit, btw.) I have that picture stored on my external hard drive for saving purposes.

However, I do own a shooting script of TMNT 1 and I haven't read it in years - but I want to go back and read it now to see what the ending was in my script. (It was indeed the finished version.)

Do you know, Peter, if any alternate fighting scenes were shot for TMNT 2? I have to different scripts at home (one is the second draft, the other is shooting) and the differences between those two scripts and the actual movie is flabbergasting! :) For instance - There was a fight on the pier with Super Shredder, not just Leo trying to reason with him.

Do you know, Peter, if any alternate fighting scenes were shot for TMNT 2? I have to different scripts at home (one is the second draft, the other is shooting) and the differences between those two scripts and the actual movie is flabbergasting! :) For instance - There was a fight on the pier with Super Shredder, not just Leo trying to reason with him."

I don't know if there were any alternate fighting scenes filmed for TMNT 2 -- I've never heard of any. Even at the time, I was not terribly interested in that movie, and thus didn't pay as much attention to it as I did the first and, to a lesser extent, the third. It's possible, I guess. If they did exist, they might make the ending of that movie more palatable (though I wouldn't bet on it). -- PL

-->> Show, .. TMNT II could have very well indeed overall been much darker.

Pete,..years ago you elaborated to me a bit on TMNT II .. while we agreed to disagree on the movie and i am still sorry it wasn't much to your liking .. the villain element particularly in Rahzar and Tokka remains particularly facinating to me. You indicated to me that those were characters you did not dislike.

The movie of II and III for me is very sentimental and in some regards psychological on many levels.

But as far as character development for the 2 main monsters .. just brilliant. Particularly Steve Bissette's hand in design for the Snapper. That right there adds so much more personal impact for the character.

Various sources of scripts have indicated that the Professor while it was never shown that he was an Utrom.. that he WAS to be an Utrom. I've argued that it could possibly be hinted that he was. But this is all hearsay.. i've yet to see a physical TMNT II script myself.

T.G.R.I. in the film i've also retconned at least to myself that it was a smaller subsidiary of the Utrom's much larger of T.C.R.I. Company.. ..

And i really REALLY appreciated Kev Munroe and his crew left a little tiny nodto TMNTs I, II and TMNT III in Splinter's trophy room. The ooze canister is there as you know.

While II and III may not be set up many fans' minds as decent Turtle fare.. i am glad that certain elements from the initial volume of TMNT leaked thru'. Like the Ooze and the Time scepter devices.

Those movies were also pretty pivital for me art-wise and are filled with memories of ones who i've loved dearly and enjoyed those films with, and in some cases some of those people are no longer with us.

So i mean before they are fully dismissed i would hope that the good that came out of those films is recognized in some regards. And i stand by that and do thank you for that. Cuz that sentimentality is important to.

I remember this Sceen from the TMNT Junior Novelization I had as a kid! Too cool!

Various sources of scripts have indicated that the Professor while it was never shown that he was an Utrom.. that he WAS to be an Utrom. I've argued that it could possibly be hinted that he was. But this is all hearsay.. i've yet to see a physical TMNT II script myself."

Dave, my memory of that script (and I offer the caveat that it has been at least fifteen years since I last read it) is that there was a scene written for the Professor in which he is shown going into a restroom at the club where the Turtles confronted the Shredder (and Vanilla Ice famously performed his "Ninja Rap"), and -- in front of a mirror -- lifting his shirt to reveal an Utrom in a robotic stomach cavity. It was never filmed, as far as I know. But it would have been cool to see, albeit confusing as heck to viewers who didn't know the whole comics backstory. -- PL

I always found them a bit scary, especially when i was younger. I think that was key tho'. The look menacing, but in actuality the twist was that they were very good, peaceful beings ( well most of them ).

Yes i can see tho'..people at the time confusing Perry for Krang or something.

Maybe someday we can get special edition of TMNT II and they can put an Utrom creeping out of his belly digitally !!

(( then suddenly a million TMNT - geeks come hunting for my head for saying that.. ))

An aside.. i'm glad i now realize Dave Warner who played the prof. was also Sark in TRON.

The Archie comics movie adaptation has the alternate ending in it.