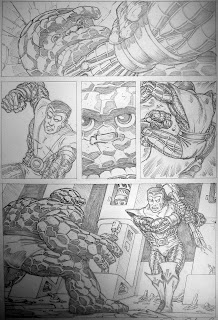 I think I did this one back around 1982 or 1983, in which two of Marvel's heavy hitters -- Colossus from "X-Men" and the Thing from "Fantastic Four" -- go one on one. This was one of several penciled pages I did on spec with which I hoped to get a job at Marvel or DC. As it turned out, my career went in another direction. (Please excuse the low quality of the image -- it's a digital photo, not very well lit.) -- PL

.. will you be showing more of your pre-TMNT portfolio when you were attempting to break into the biz, i mean like soon ??

I'd reiterate Vaughn's idea for some Coffee table book or something.

The quality is ok as far as the photo.

Sigh...That type of style drawing is become a lost art these days in animation. Apparently straight edges and ugly character designs are easier to draw than true to form and roundness in figure. Take Kim Possible, the new Transformer series, and a few others as examples...

Speaking as a kid of the 80's, kids today have no idea what good animation is. The closest they've come to it is Justice Leauge, maybe even the new He-Man series. the rest of today's 'artfully' animated series just look like crap.

Hey Peter, is the art style on BTTS (Which does not look bad for what it is) the direction you would like to go, or is it for budget cut reasons only? I take a look at episodes like Notes From the Underground and it's beautifully lit art, and then compare it to Tempus Fugit and just sigh ;o)

thats fantastic :P
you draw a great Ben, I love him

(got the 5 piece portfolio, awesome job...gotta get some frames now!)

Niiice! Great seeing you draw Colossus, a favorite of mine.

This is the type of art style that needs to be replicated in a CGI movie.

If you submitted this I'm surprised you didn't get hired on the spot. It must be harder than I thought breaking into the comic biz because this looks a lot better than the 80's marvel art I remember. I guess after the inker went over it they'd print it on newsprint with the color dotting system and it wouldn't look as crisp and nice as it does with just your pencils.

While the marvel world missed out on great hero vs hero action, I can't say you made the wrong choice. I don't think I'd even be reading comics if not for turtles.

Wow, nice work and I really like the last panel. A really great pencil piece Pete!

I have to say this really made my day being a bit of a marvel nut. Thanks for this one Pete, marvel really missed out on a talented artist. I have lost a lot of interest in comics lately with art becoming a little too stylised at times for my liking. Great work Pete I love all the artwork you've been posting lately.

Very cool! I can't believe they didnt scoop you up as soon as they saw it! (But then we may have never had turtles and then that would have been something cool in my life gone.)

Am I a huge geek for not being able to help imagining the story that would have lead to this fight?

Man! Why don't you switch back and forth as the artist for TMNT v 4? That would be great.

I'm glad things turned out the way they did. The Kirby is very noticeable in the Thing.