Variations on a theme

When I realized, back in the late 1970's or early 1980's, that photocopying technology has reached the point where one could cheaply obtain very accurate copies of one's artwork, with rich blacks throughout (early copiers had a hard time with large areas of black), and on a variety of papers (including nice white card stock), a number of opportunities presented themselves. One of the most obvious, and fun, was that I could draw something, then copy it multiple times to experiment on, all the while leaving the original drawing unaltered.

So it was with this piece. I can't remember the exact inspiration for it, but it is, I think, one of my more successful drawings -- I liked to try to come up with images which implied some kind of interesting untold story, and occasionally it worked. This piece went through several iterations. First, here is the inked drawing. 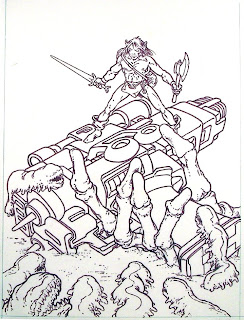 I then photocopied it and tried a few variations. This one -- obviously abandoned when I didn't like where it was going -- was an attempt to render it in shades of grey using grey markers. 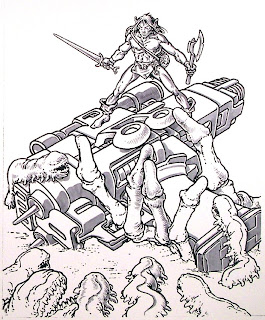 Then I tried applying tones with my airbrush. 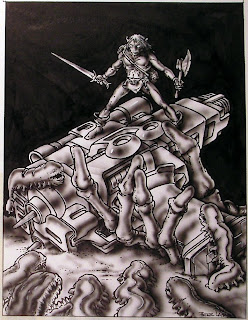 Later, Kevin and I did our own color versions of the piece. It's interesting to note our different approaches to coloring it. Here's my version... 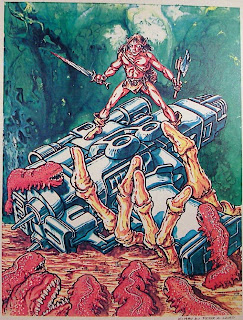 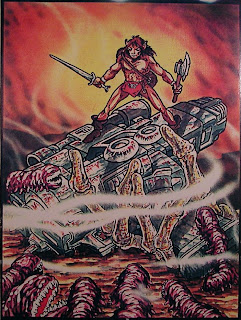 Hmmm... you know, looking at these again makes me think it might be fun to try some computer coloring on it.-- PL
Posted by PL at 8:31 AM

Your past process is rather tight.

And this is the first i recall seeing a colour variation of the same piece by you and Kevin of this sort.

When was the lats time you touched an airbrush.

They all really stand out. But the B /W version is a little extra creey.

I'm always impressed by airbrush work. I was never any good at using airbrushes on a flat surface to render things, but give me a puppet or a sculpture and I'm fine. Weird...

I also really dig both of those coloured sets too.

I like the fact that the human is standing on a gun and the skeleton hand underneath it.

Very interesting pic. It makes one wonder what happened to the giant and how the barbarian go to be in this predicament.